Kawhi Leonard Too Busy to Celebrate With NBA Championship Trophy 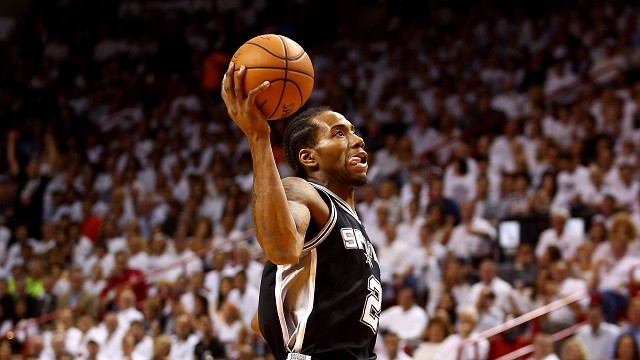 Kawhi Leonard with his eyes on the prize (via Getty)

As part of the off-season celebration for the NBA title-winners, each member of the champion Spurs receives the Larry O'Brien trophy to party with as they see fit. Patty Mills took the Tiffany & Co.-designed trophy on a seven-day, Down Under tour of his native Australia. Matt Bonner, ever the indie rock lover, spent his time with the trophy at a music festival in his home state of New Hampshire.

"I didn't have any time to do anything with it," said Finals MVP Kawhi Leonard. "My workout schedule is crazy." Instead, Leonard left his trophy in his apartment in San Diego, doing three-a-days at the gym to prep for the 2014-2015 season.

Given his staunch and stern attitude towards the extracurricular circus surrounding the NBA, Leonard's non-celebration with the trophy is no surprise. To stay healthy and on target for the impending season, Leonard withdrew from the USA team for the summer's FIBA World Cup, beginning August 30 in Spain. During some Jimmy Kimmel gag interviews during the NBA Finals, Leonard stone cold ignored the selfie-request from Kimmel sideman Guillermo Rodriguez.