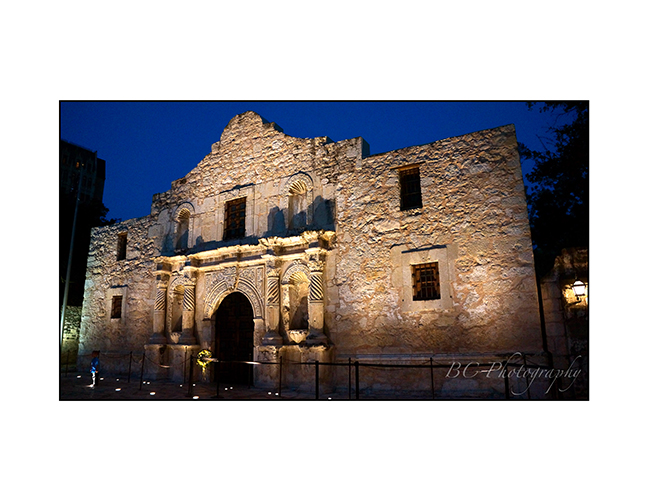 The Alamo by Brandon Carrillo

While the vast majority of Fotoseptiembre’s wide-ranging offerings land on gallery walls with some sort of curatorial slant in tow, “Somos San Antonio” comes together in a refreshingly organic fashion. Inviting community involvement via submissions from local photographers of all ages and skill levels, the recurring exhibition highlighted vanishing and neglected landmarks with 2013’s nostalgic “Places That Once Were” and this year shifts its focus in a slightly cheerier direction with “San Antonio Faces at Historic Places.” Billed as “the first National Trust Historic Site in the state of Texas,” 19th-century King William landmark Villa Finale once again hosts the juried show, which presents local shutterbugs with the sole requirement of capturing subjects at one of the Alamo City’s many storied locales. Free, 5:30-7:30pm Thursday, Villa Finale Visitor Center, 122 Madison, (210) 223-9800, fotoseptiembreusa.com. —Bryan Rindfuss 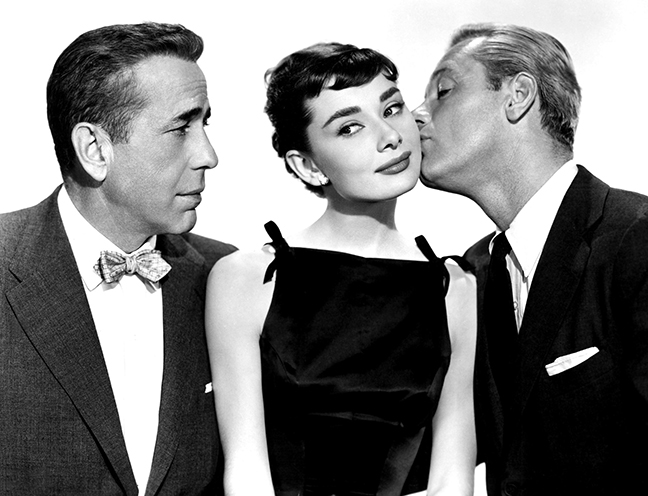 Ugly duckling yearns for playboy son of her father’s employer. Playboy son ignores her. Duckling goes to Paris and comes back a swan. Madness ensues. Thus is the age-old tale of love, longing and missed connections exhibited in 1954’s Sabrina, starring Audrey Hepburn and Humphrey Bogart. You may come for the sugar-sweet wit, but you’ll stay for the costume design. Sabrina marks the first collaboration between Hepburn and Givenchy, the designer who developed the picture-perfect elegance of the actress’ wardrobe. The McNay screens this classic as part of its 60th anniversary film series. Free, 6:30pm Thursday, McNay Art Museum, 6000 N New Braunfels, (210) 824-5368, mcnayart.org.—Murphi Cook

"These Words Are Bound" 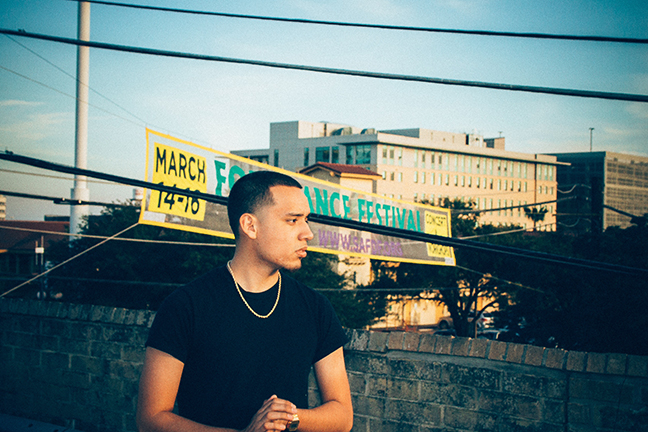 “These Words Are Bound,” presented by SATX Music and Die Happy Productions, is a great chance to catch a smattering of up-and-coming local/regional hip-hop talent and give to those in need. The unique event, which will feature hip-hop performances, live art and food trucks in the tranquil setting of Blackgold Emporium and The Little Patch Garden, doubles as a book drive for the Eastside Promise Neighborhood. We are especially excited about peeping SA rapper LaJIT (above), whose brooding and unapologetically personal flows, delivered with razor alacrity, make him one the most exciting emcees in town. Free, 8:15pm Friday, Blackgold Emporium, 329 N Main, (210) 979-1528, facebook.com.—James Courtney 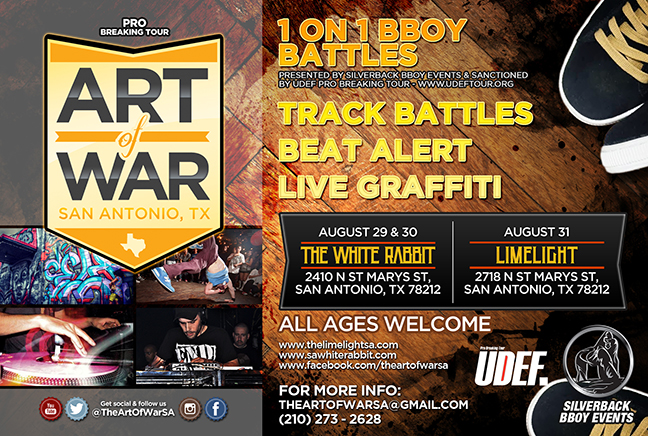 Datpiff.com is awesome and free, but their most-listened-to mixtapes currently include five from Lil Wayne and three from Wiz Khalifa, so those seeking the newest thing in hip-hop might be better off going outside. Art of War challenges MCs and beat-makers to deliver the goods live in original-track battles. Not all will be good, but some will be great and you probably never would’ve thought to Google any of them. That goes triple for break dancing and graffiti, well represented here but mostly discovered online via YouTube roulette. $8-$12, 8pm-2am Friday, 3pm-2am Saturday, The White Rabbit; $5, 8pm-2am Sunday, Limelight, 718 N St. Mary’s, facebook.com/theartofwarsa. —Jeremy Martin 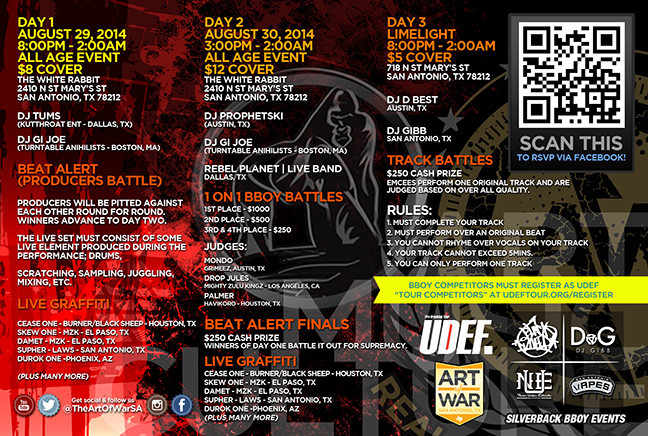 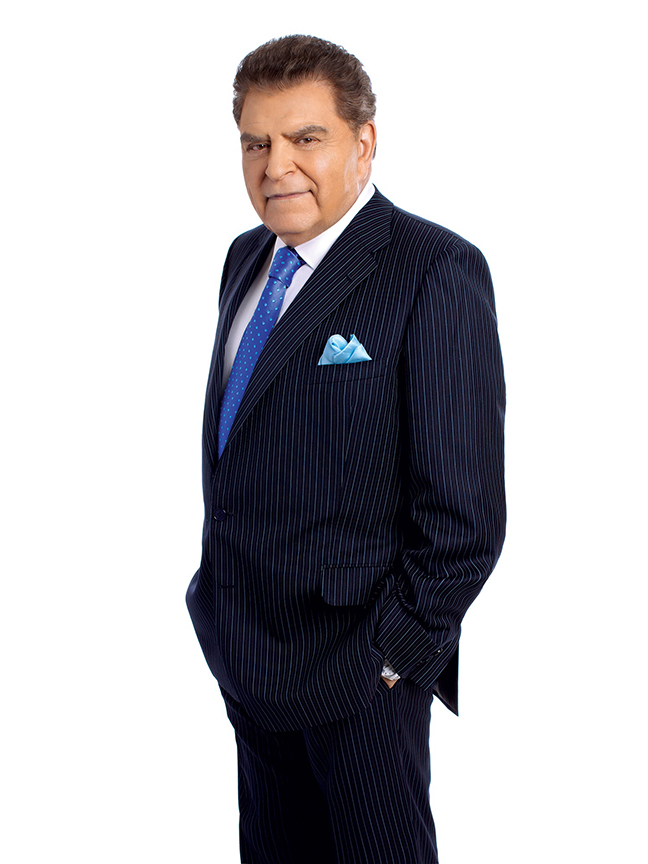 It’s a who’s who among Latinos in the music, film, TV, media, health, fashion and sports industries, as the Alamo City welcomes a host of celebrities to the 2014 Festival People en Español this weekend. Among the stars to join the festivities and treat patrons to musical performances, speaking engagements and special Q&A panels include actresses Génesis Rodríguez (The Last Stand) and Cristela Alonzo (ABC’s Cristela), actor Eduardo Verástegui (Bella), film director Miguel Arteta (Cedar Rapids), Spanish TV icon Don Francisco of Sabado Gigante fame (pictured) and professional boxer Saúl “Canelo” Álvarez. Hosted by CNN’s Alejandra Orra and Azteca TV’s Poncho De Anda, both days begin with a Zumba class taught by local fitness instructor Mario Gómez and the Dále Fitness Team. Exercise will be followed with a concert by Mariachi Vargas Extravaganza on Saturday and Texas-based all-sister group Las Fenix on Sunday. Other performances throughout the weekend include singers Priscila Ángel, Gabriel Coronel and Jaci Velásquez. The festival is free, but if you want to pony up some cash, there is a concert next door at the Lila Cockrell Theatre on Saturday featuring urban pop artists Becky G. (below) and Zendaya that’ll set you back $20-$60. Free, 9:30am-5pm Saturday-Sunday, Henry B. Gonzalez Convention Center, 200 E Market, peopleenespanol.com/festival.—Kiko Martínez 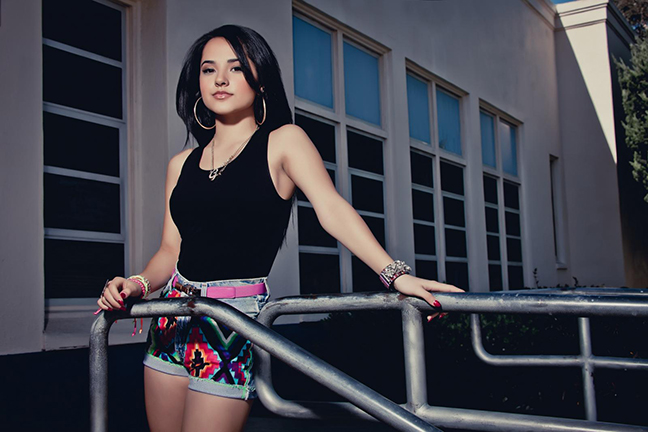 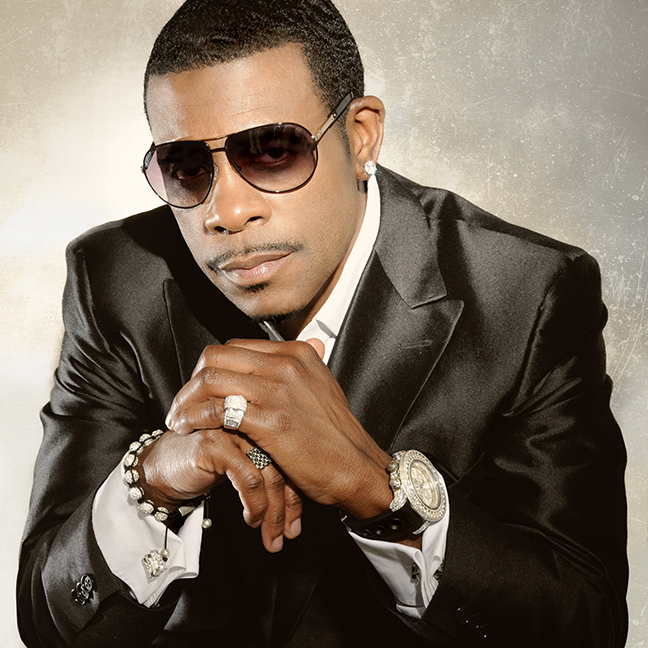 Don’t get it “Twisted,” there’s “Nobody” who gives you “Funky Dope Lovin’” like Keith Sweat. Now 53 years-old, the 1990s R&B hit-maker and New Jack Swing innovator released the surprisingly fresh ’Til the Morning (which reached No. 38 on the Billboard 200) in 2011, proving that he’s still got it. For further proof of the man’s undying smooth, you can catch him in action this weekend, along with fellow funk/soul/R&B acts Rose Royce, Ohio Players, Dazz Band, Midnight Star and others, as a part of the two-day Labor Fest. Our advice: grab your sweetie (or someone’s) and get set to get down. $15-$450, 4-11pm Saturday-Sunday, Sunken Garden Theater, 3875 N St. Mary’s, laborfestsa.com. —JC 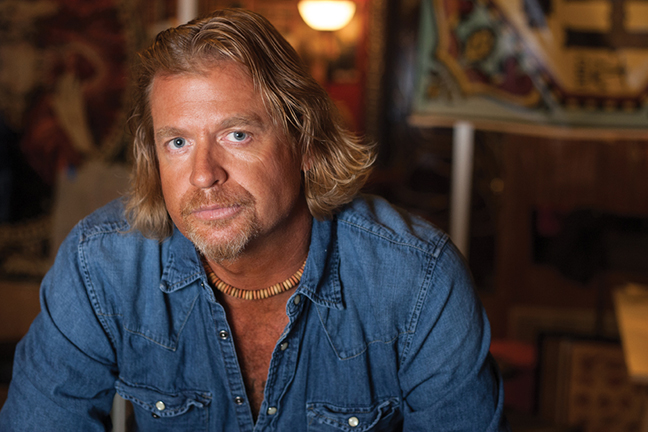 Charlie Robison’s most recent album—last year’s High Life—is a collection of covers, featuring the songs of Doug Sahm, Kinky Friedman and Bob Dylan, but it’s not a sign the Bandera-raised singer-songwriter is retiring into irrelevance. High Life instead finds Robison attempting to heal after leaving his own blood on the tracks with 2009’s Beautiful Day, recorded in the wake of his divorce from Dixie Chick Emily Robison (née Erwin). Whether singing his own songs or covers, the straightforward sincerity and Texas grit in his lived-in voice only become more meaningful as years pass. $25, 9pm Saturday, 8pm Sunday, Gruene Hall, 1281 Gruene, New Braunfels, (830) 606-1281, gruenehall.com. —JM 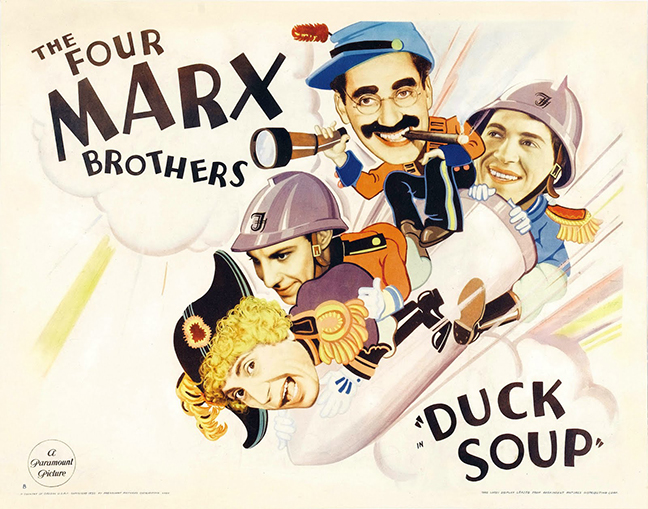 Sixty-three years before The Daily Show, 39 years before George Carlin’s Class Clown and 30 freaking years before Mort Sahl took to reading the Warren Report onstage, Groucho, Chico, Harpo and Zeppo Marx heaved 68-minutes’ worth of monkey wrenches at the war machine, many of which can still be heard grinding gears today. With biting satire, surreal physical comedy, Shakespeare-class wordplay and indescribable nonsense, the Brothers Marx fight the power so savagely that human civilization (not to mention the shared reality it presupposes) is severely bruised by the incidental blows. $7, 4:15pm Sunday, Alamo Draft House Park North, 618 NW Loop 410, (210) 677-8500, drafthouse.com. —JM 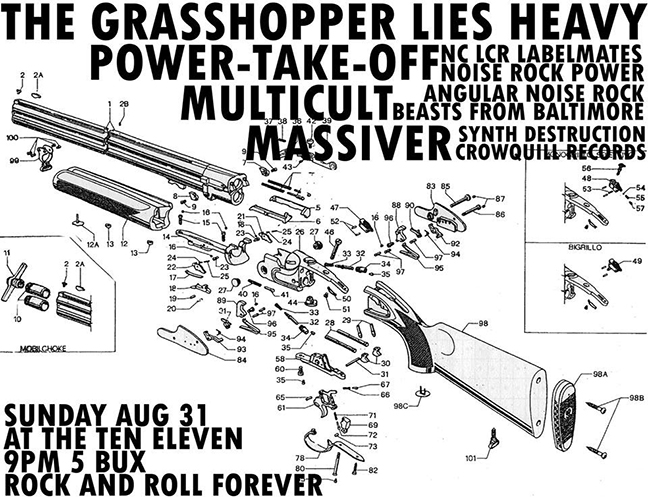 From slow, pounding drone metal to sludgy takes on Rollins Band sermons, Power-Take-Off’s This Is Late on Learning Curve Records runs the gamut on noisy guitar music. Also on Minneapolis’ Learning Curve, The Grasshopper Lies Heavy’s recent All Sadness, Grinning into Flow is a torrent of unexpected sounds pulled from the six-string. From peeling drones that recall The Warriors soundtrack to all-out shred-a-thons like the nine-minute “Marathon II,” TGLH’s second release is a stunner of a sophomore effort. With Baltimore noise trio Multicult and SA synth deconstructionists Massiver. $5, 9pm Sunday, The Ten Eleven, 1011 Avenue B, (210) 320-9080, theteneleven.com. —Matt Stieb 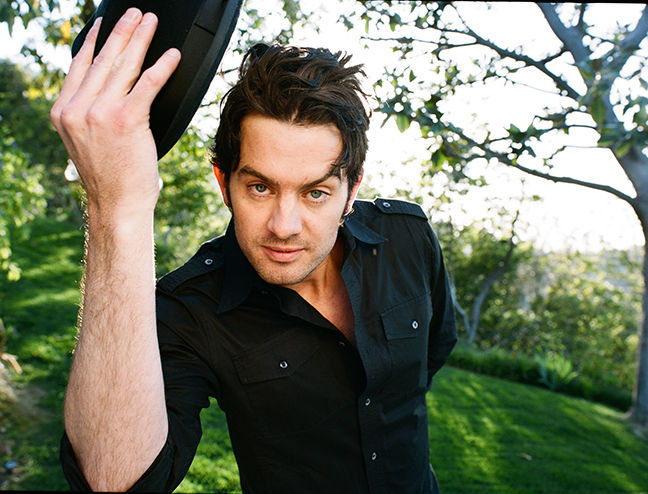