Based in Los Angeles, Lolipop Records knows how to hit the garage rock sweet spot. One of a growing number of like-minded label/stores across the country, Lolipop has been cutting jangly, guitar-driven tunes since 2006. Presenting some of their finest in SA, the Lolipop Caravan tour is a delight of a Monday evening. Read up on tonight's line-up. Lolipop Records Caravan Tour feat. Rich Hands, Creatura, $7-$10, 8pm Mon, Sept 1, Limelight, 2718 N St. Mary’s, (210) 735-7775, thelimelightsa.com – Matt Stieb 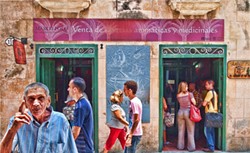 Time is running out to check out “Matisse: Life in Color" at the San Antonio Museum of Art. Spanning six decades of his life’s work, the exhibit showcases the comprehensive, expressive, revealing and evolving indulgence of 20th century master Henri Matisse and the richness of his exterior world. The show, assembled from the renowned Cone Collection, features the artist’s definitive pieces such as The Yellow Dress (above), Large Reclining Nude, Purple Robe and Anemones and includes 80 paintings, works on paper and sculptures. The exhibit closes September 7. "Matisse: Life in Color, Masterworks of the Baltimore Museum of Art," $15-$25, 10am Tues, 9/2, San Antonio Museum of Art, 200 West Jones, (210) 978-8100, samuseum.org

One Flew Over The Cuckoo's Nest

Kirk Douglas played on Broadway as a charming rogue who contrives to serve a short sentence in an airy mental institution rather in a prison. This, he learns, was a mistake. He clashes with the head nurse, a fierce artinet. Quickly, he takes over the yard and accomplishes what the medical profession has been unable to do for twelve years; he makes a presumed deaf and dumb Indian talk. He leads others out of introversion, stages a revolt so that they can see the world series on television, and arranges a rollicking midnight party with liquor and chippies. For one offense, the head nurse has him submit to shock treatment. The party is too horrid for her and she forces him to submit to a final correction a frontal lobotomy. Winner of the 2001 Outer Critics Circle Award for Outstanding Revival. Read the review. One Flew Over the Cuckoo's Nest, $14-$20, 7:30pm Thurs, 9/4, Sheldon Vexler Theatre, 12500 N.W. Military Hwy, (210) 302-6835, vexler.org