Some consider the legendary jazz cornetist and band leader Jim Cullum, a landmark figure in the Riverwalk Jazz scene, to be the star attraction of his son’s joint, Tucker’s Kozy Korner—even bigger than gospel brunch. Playing the music of King Oliver, Louis Armstrong, Sidney Bechet and Bix Beiderbecke, the Jim Cullum Jazz Band is a San Antonio classic you have to experience at least once. No cover, but dinner or appetizers required, 7-10pm, Mondays, Tucker’s Kozy Korner, 1338 E. Houston St., (210) 320-2192, tuckerskozykorner.com. 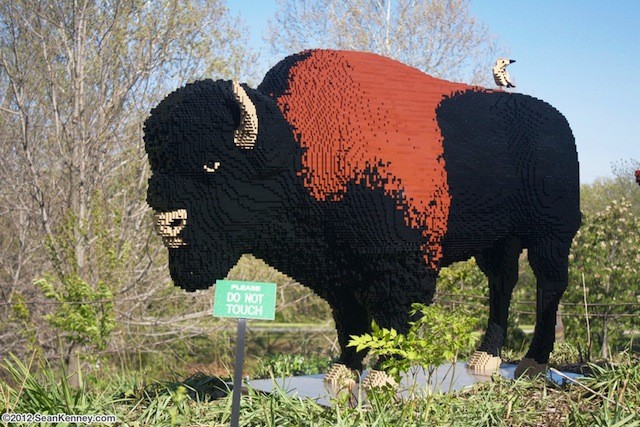 This bison is constructed of 45,143 LEGO bricks.

At War with Dust Residency at Liberty Bar

At War with Dust opened his residency at the Liberty Bar last Tuesday. (Photo by Charlie Kitchen)

Kevin Sanchez, aka At War with Dust, is the September artist of the Liberty Bar’s monthly residency series on Tuesdays. With an an evolving act for the 7pm slot, varying week-to-week in both lineup and style, Sanchez is performing with a line-up of guests. This Tuesday, Sept. 9, is "Orchestral Nite" with marimbist Kelly Merka Nelson and cellist Sean McCarrey. Next Tuesday is "Rock Nite" with singer-songwriter Chris Maddin of the band Blowing Trees, followed by "Jazz Nite" drummer Kory Cook and his ensemble The Whale on Sept. 23. The residency closes with a "Blues Nite" featuring a secret surprise guest yet to be announced. Free, 7pm, Tuesdays through Sept. 30, Liberty Bar, 1111 S Alamo St, (210) 227-1187, liberty-bar.com.

Guillermina Zabala: I, Me, Light

This still from I, Me, Light features filmmaker Ya'Ke Smith.

Guillermina Zabala’s silent video, I, Me, Light, was first shown at Luminaria, San Antonio’s annual one-night arts festival. The work consists of a series of video portraits that capture the multifaceted culture of the city and focus on themes of language and identity. The title of Zabala’s video is based on a song by the Beatles, written and sung by George Harrison. Zabala describes “I, Me, Mine,” the last track recorded by the band before their split, as a “critique of the material body as one’s false self and of material possessions as temporary.” Finding inspiration in Harrison’s 1980 autobiography, in which he argued that the “truth within us has to be realized,” Zabala asked her subjects to answer the profound question: “Who am I?” Artists, curators and other individuals in the art community responded by using their index fingers to write in the air words that best represent themselves. After filming each person, Zabala highlighted the words with light, which created a “light-writing” effect. $10-$20, 10am-9pm Thursday, 10am-4pm Friday, 10am-5pm Saturday, noon-5pm Sunday, McNay Art Musem, 6000 N New Braunfels, (210) 824-5368, mcnayart.org.

Bobby Bare, Jr., a Nashville native, wields a unique songwriting craftsmanship with a voice that blows through you like an unyielding car. The son of country musician Bobby Bare, Sr., the younger Bobby grew up next door to Tammy Wynette and George Jones with Shel Silverstein as a long-time family friend and writing influence. Bobby Bare, Jr. is touring in support of his latest album Undefeated, which he refers to as not a break-up album but "the getting dumped record." $10-$40, Doors open at 8pm, Wednesday, Sept 10, Sam Burger's Joint, 330 E. Grayson St., (210) 223-2830, samsburgerjoint.com.