A Portrait of the Artist as a Cosplayer 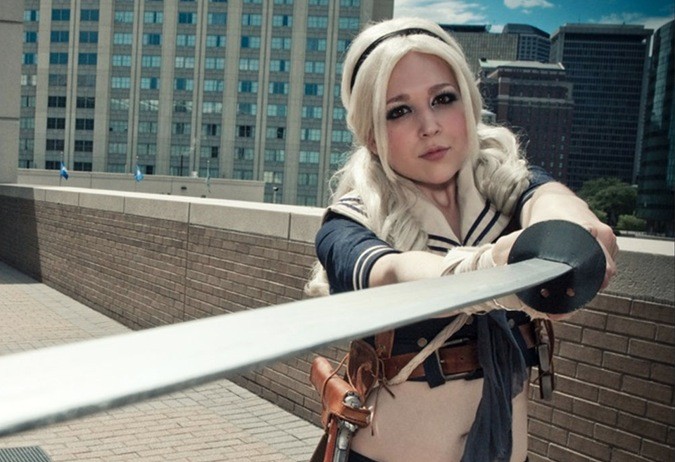 Nicole Marie Jean has to pee very badly, but she won’t stop chatting, cracking jokes and posing for photos with her fans. That’s because she won’t let her fans down.

This past weekend, Alamo City Comic Con gathered some of the most popular cosplayers from around the nation for their nerdy extravaganza. Cosplay involves dressing up to look like characters straight out of comic books, video games, and Japanese cartoons. The trend has gained a lot of traction as comic conventions increase in their popularity.

In fact, cosplay has sprouted into a cultural phenomenon. In addition to being special guests at comic conventions, cosplayers often act as web personalities and public relations representatives for brands. For instance, cosplayer LeeAnna Vamp hosts the web show I Love Nerd Girls, and Nadya Sonika recently joined Riot Games where portrays League of Legends characters in full armor regalia at promotional events. Ani Mia got her start in 2007, and now making appearances at conventions is her full-time job.

Cosplay’s origins, however, are all about fun, and veteran cosplayer Mariedoll and newcomer Foximus Prime understand that cosplay needs to stay fun. They get a kick out of the experience of being recognized as the characters they portray.  Their fans do too, they say. It creates a kind of instant bond.

Overtime, cosplay has developed a style that emphasizes costume craftsmanship with a sexy pin-up presentation. Yet, for cosplayers like Nicole Marie Jean, Jennifer Van Damsel, and Ivy Doomkitty, it’s all about the art. Van Damsel believes the sewing required to create the costumes is where its merit lays. For Jean, the craftsmanship necessary to create a suit of armor, for example, makes cosplay akin to art. One of the most recognizable cosplayers, Ivy Doomkitty, believes cosplay is similar to comic book art.

“Just like artists draw their own rendition of a character—thick, thin, tall, or short—it’s their way of them expressing themselves. I feel the same thing can be said about cosplay,” says Doomkitty.

For fans, one important part of the cosplay experience is to buy prints and get autographs from their favorite cosplayers. Some of these photos look like very nerdy pin-ups complete with sexy costumes and poses. Other photos are dramatic and stylized. Unfortunately, cosplay can attract an unsavory population that many female cosplayers must confront.

Soni Aralynn has reliable techniques for dealing with these kinds of visitors. When online trolls call her derogatory names, she deletes and bans their messages from her social media profiles. “Don’t feed trolls” is her motto. If those inappropriate, crude jokes and a creepy vibe somehow decide to make it to her booth, she uses humor to diffuse the situation. If that fails, she will leave her booth with her cosplay friends at her side.

Like any community, there is drama from time to time as well. Some people jump into profession in pursuit of fame and popularity. Others believe it’s a pathway towards a modeling career. Those approaches can rub cosplay veterans and newcomers the wrong way, especially those focused on their artistic expression. Aralynn has some advice for people interested in jumping into cosplay.

“You want to represent people that inspire you—Star Sapphire, the Green Ranger—make sure it’s fun and inspiring. Striving for something like [fame] is not going to be that special spark that we’re all looking for when we all do this.”

The same could be said for the legions of fans that love the characters these artists portray. These cosplayers won’t let their fans down.