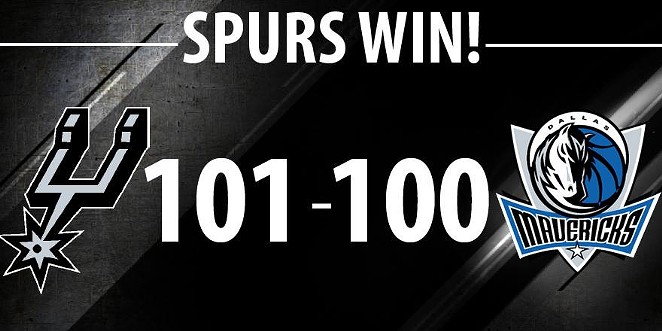 The Spurs beat the Dallas Mavericks 101-100, kicking off the season with a slim fourth quarter win. In the waning minutes, the atmosphere in the AT&T Center felt like a continuation of the SA-Dallas first round series from last year, a hard-fought match between the Lone Star rivals.

A half hour before the game, the Spurs took the floor for the championship ring ceremony. For the season recap on the jumbo screen, the Spurs hired marquee narrator Samuel Jackson to tell an all-caps recollection of the year, while footage played of 2014 dunks in slow motion.

NBA Commissioner Adam Silver took the floor, presenting rings to Spurs owner Peter Holt and the coaching/management staff of the 2014 champions. As head coach Greg Popovich walked away, bling in hand, he gave a rare and celebratory fist pump. "We enjoyed the ceremony very much, as anyone would," said Popovich.

About six minutes in, Ginobili came off the bench to applause at decibel levels your mother warned you about. Despite the offseason trouble in his right leg, he didn’t seem slower or to noticeably favor his left. In the second quarter, the Mavericks gained momentum, outscoring the Spurs by 10 points. Monta Ellis, who averaged 19 points per game last season, scored an impressive 14 in the half. By the break, Dallas led 53-45.

The Spurs came out swinging after halftime, making a 12-4 run to tie it at 57. The momentum shift frustrated the Mavs, with Tyson Chandler and Dirk Nowitzki committing technical fouls in the third quarter. After a flurry of lead changes, Manu knocked down a 15-foot step back to close the quarter with the Spurs leading 76-73.

Ginobili maintained the energy in the final quarter, starting with a three. The Spurs carried a single-digit lead through the quarter, until Dirk Nowitzki hit a step back from the corner, putting the Mavs ahead 100-98 with 90 seconds left. Shortly after, Tony Parker returned with a three to put the Spurs up 101-100.

In the last possession, Dallas held the ball with a negligible difference between the shot and game clock. Chandler Parsons threw up a shot, which rimmed out for a Spurs victory.

"It felt great," Chandler Parsons said after the game. "It was kind of a broken play where I got a good look, but looking back, I may need to make an extra pass to Monta [Ellis] but I did not know how much time was left. I'll take that shot any day at the end of the game, and I just have to step up and knock it down next time." 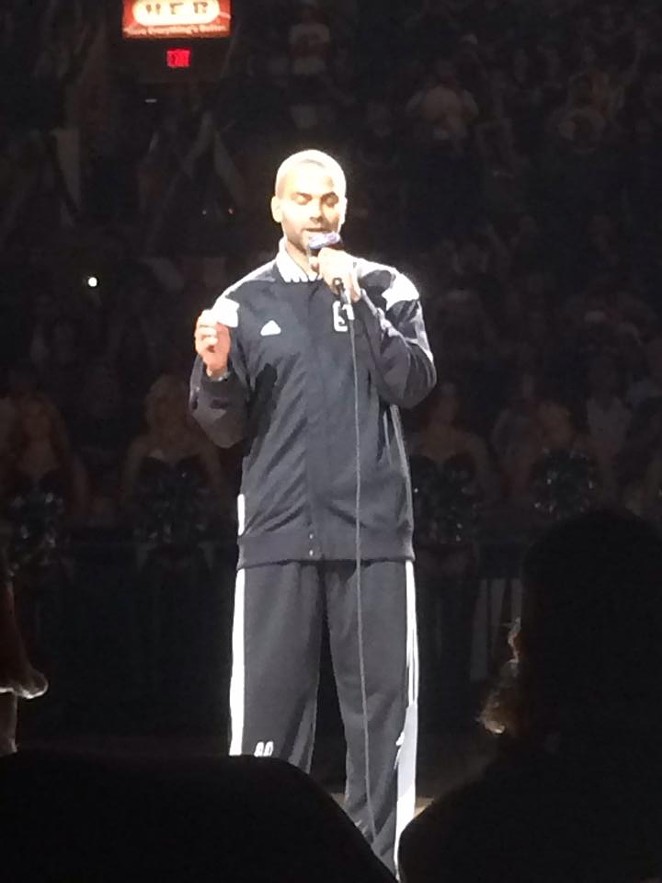 Notable Performances
Manu Ginobili scored 20 points, with a powerful understanding of momentum. "He was like zero for 50 in the preseason, and had like 19 turnovers per game, but tonight he was Manu Ginobili," said Popovich. "He was unbelievable."

Tony Parker dropped 23 points, shooting 4/4 from three-point. "He is a guy who energizes us, and we need to ride him a little bit to keep our heads above water, especially with all of the injuries right now," said Popovich.

Tim Duncan bodied his way to 14 points and 13 rebounds. Though he turned the ball over five times, most of the errors happened while he was bruising in the paint.

The Spurs looked fluid and high-energy without Tiago Splitter (calf), Patty Mills (shoulder) and  Kawhi Leonard (eye infection). "Kawhi was cleared to play tonight, but I chose to give him a little more time," said Popovich. "Don't take this to the bank, but I'm guessing he is probable for Friday. Tiago and Mills will be out, but Kawhi might be back. We have two days to practice and get him out on the floor. We want to make sure he doesn't infect anyone else."

Dirk Nowitzki scored 18 points, including the lead-changing step back and Dallas' final points. Nowitzki's impeccable footwork, ability to create space and his seven-footer release mean that the 36-year-old power forward is still one of the most unguardable players in the league.

The Breakdown
Power forward Aron Baynes looks like a 6'10' GI-Joe. All crowd-hyping motions can be sourced back to Hollywood Hulk Hogan. The Spurs now own a gatling gun for t-shirt cannons. It sprays out gas onto the court and it is terrifying.