The Vexler Vexes with Euripides’ Doleful Drama ‘The Trojan Women’ 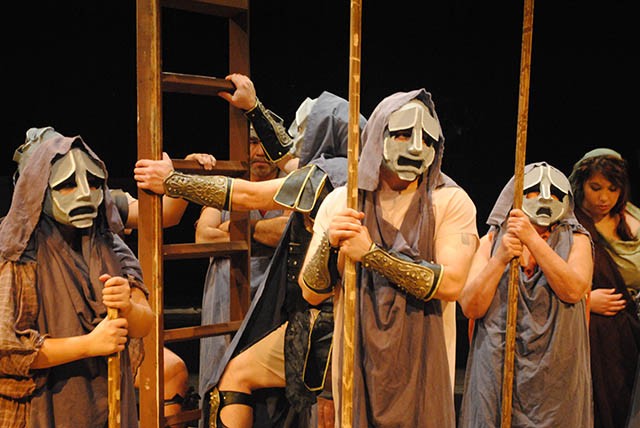 To stage an ancient Athenian play today, adjustments must be made—by the director and the audience. It would not do to have the actors speaking Greek, or wearing masks throughout. Contemporary audiences must come prepared for an experience more akin to a religious ritual or a communal poetry reading than an encounter with Ibsen or Mamet. Set immediately after the Greek victory over Troy, The Trojan Women is an elaborate dirge for the casualties of war. It is more like a group recitation of Allen Ginsberg’s Kaddish than a performance of The Cherry Orchard.

Euripides begins with a conversation between Poseidon and Athena, but directors Ken Frazier and Tami Kai eliminate the gods from any appearance in their production. Instead, a disembodied voice summarizes what any Greek schoolchild or reader of The Iliad would know—after a ten-year siege of Troy, the Achaeans, hidden in a decoy wooden horse, have invaded the city, massacring its men. The surviving women recount the slaughter and anticipate further woes. Condemned to be the trophy of a Greek marauder, each repeats: “I am beyond grief.”

The chorus in Euripides’ play has been eliminated, and, in the intimate Vexler space that has been transformed into a theater-in-the-round, Trojan women engage in collective keening. Hecuba, the fallen Queen of Troy, played with doleful majesty by Christy Huffman-Coop, bemoans the loss of royal husband, sons, and daughters, as well as her impending concubinage to Odysseus, “vilest of all the Greeks.” Moments of hope—that Hecuba’s daughter Cassandra might wreak havoc on Agamemnon’s household and Hector’s infant son Astyanax might grow up to avenge his people—are rapidly dispelled.

The Trojan Women, which won only second prize when premiered at the Dionysia festival in 415 B.C.E. (first place went to a play, now lost, by Xenocles), lacks two essential ingredients: humor and conflict. No wit offsets the thickening gloom. However, two vectors of tension create some drama. Helen, played with defiant allure by Chelsea Steele, is hauled out by her cuckolded husband Menelaus (Ismael Mercado). While the mourning women hiss the “Spartan whore” who started the whole damn war, Hecuba and Menelaus argue over what should be her proper fate. And throughout the play, Talthybius, herald of the Greeks, comes by to convey devastating news. Cristopher Travieso plays him as a soldier with a modicum of compassion offset by a duty to follow orders.
“Count no one happy, however fortunate, until they are safely dead,” declares Euripides’ Hecuba, echoing Solon and Sophocles. Do not count this old play irrelevant until the terms “collateral damage” and “PTSD” fade into antiquarian obsolescence.