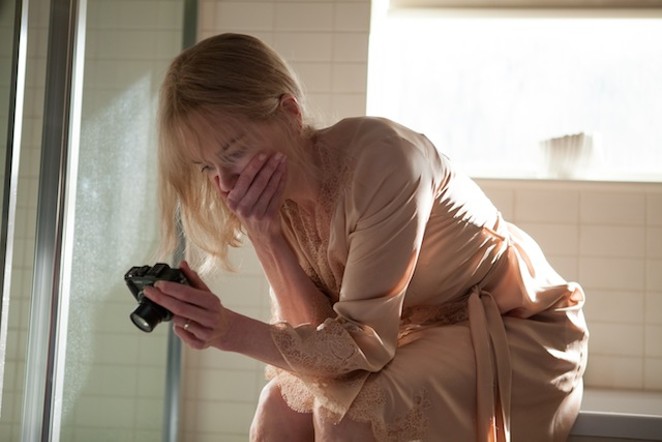 Hollywood’s prestige season looms, and if prestige is a season, and that season is fall, then Before I Go To Sleep, directed by Rowan Joffe, is the first leaf that plucks itself from the branch and floats slowly through the thick humid air and onto the still-hot-from-summer San Antonio dirt—applauded for its effort, but ignored by those who know better.

Before is the story of psychogenic, amnesia-stricken Christine (Nicole Kidman), a woman with no recollection of recent days, or years—or anything. Her therapist Dr. Nasch, played by the convincing Mark Strong, realizes Christine can store memories during the day and tells her to record her thoughts on a point-and-shoot camera.

Christine’s husband, Ben (Colin Firth), takes painstakingly good care of her. Like all loving husbands, he maps out their entire life with a piecemeal collage glued to the tile of their bathroom wall. Yellow sticky notes denote major life events like “our wedding.” He also lies about the existence of their son—who might have died from meningitis—or didn’t die at all. Joffe should have written the word villain in capital letters and red ink on Firth’s forehead because I assure you, the audience, put Ben on creep-ball alert from the get go.


I guess it makes sense that Christine is rendered helpless throughout the film, but it’s tiresome and upsetting to watch her get bossed around for an hour and a half. Dr. Nasch and Ben are making the decisions in Before—not Christine. It would be nice to see a more decisive Christine, otherwise the ending feels like a waste of time.

I haven’t read S.J. Watson’s novel Before I Go to Sleep (on which the movie is based), and it might be phenomenal. The material sure is ripe for a successful thriller, and in the right hands it might have been. Unfortunately, Joffe’s Before lacks direction and watching Kidman’s Christine slowly piece her life together is not a recipe for success.