Edward Albee intertwines illusion with reality in his iconic play Who’s Afraid of Virginia Woolf? George and Martha are middle-aged and married. George and Martha are also drunk. When a much younger couple arrives at their door, drinks flow, inhibitions fade, and reality drifts away. Riddled with tongue twisters and fast-paced banter, the 1963 Tony winner has received countless revivals. This production marks a fresh collaboration between local fashion designer Angelina Mata and the artistic team at AtticRep. Mata’s vision includes a monochromatic color palette that “drowns out the reality of the character’s lives and interrupts the intensity of their emotional state.” Roberto Prestigiacomo directs the production. $18-$28, 8pm Wed-Sat, 2:30pm Sun, Tobin Center for the Performing Arts, 100 Auditorium Circle, (210) 223-8624, atticrep.org —Murphi Cook 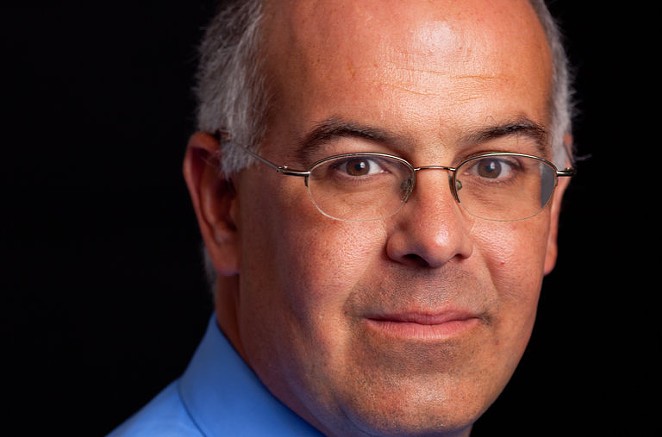 In his bi-weekly op-ed for The New York Times, David Brooks is a shark among dolphins (or vice-versa), occupying some of the few column inches in the paper reserved strictly for conservative thought. Blue bloods, don’t let that red tinge color you disinterested—Brooks is a brilliant thinker and lucid writer appearing regularly on PBS’ Newshour and NPR’s All Things Considered. In recent weeks, the Toronto native has written about Ebola’s ability to exploit “weaknesses in our cultural fabric,” the errors of politicians “microtargeting” voters and political idealism after Obama. Free, 7:30pm, Laurie Auditorium, 1 Trinity Place, (210) 999-8117, trinity.edu. —Matt Stieb

The new Alamo Beer Brewery will open its doors one night only for a special sneak-peak preview event on Wednesday, November 12. Attendees will get a chance to preview the new Alamo Beer Brewery before it opens to the general public. Live entertainment, tasty bites, raffle prizes, wine and complimentary Alamo Beer will all be a part of this special evening with proceeds to benefit the San Antonio Food Bank. $15 advanced tickets, $20 at  the door, 5:30pm-8:30pm Wed, Alamo Beer Brewery, 202 Lamar, (210) 872-5589, purchase tickets online.

This week marks the final McNay Second Thursday of the year. Join us for a night of free fun on the museum grounds, featuring live music from singer, songwriter and pianist Lucas Jack. Food is available for purchase from some of San Antonio's best food trucks, plus there's free beer courtesy of Crispin Ciders and wine courtesy of Becker Vineyards. Docent-led tours of the collection begin at 6 p.m. and 8 p.m.. This event is a partnership with the San Antonio Current. Free, 6pm-9pm Thu, McNay Art Museum, 6000 N New Braunfels, (210) 824-5368, mcnayart.org