If you break it, you buy it. With that said, the Southwest School of Art’s Russell Hill Rogers Galleries open “Intense and Fragile,” an exhibition exploring “the conjunction of physical properties and conceptual frameworks in contemporary porcelain scultpture.” Featuring artists from all around the country, including SA’s own Jennifer Ling Datchuk and Ryan Takaba, the group show highlights a wide range of work—from meticulous miniatures to grand wall and floor installations. Concurrently, Austin-based Liz Rodda unveils a group of cough-syrup dye transfer works in the Ursuline Gallery. Free, 6-8pm, Southwest School of Art, 300 Augusta, (210) 224-1848, swschool.org. –Murphi Cook 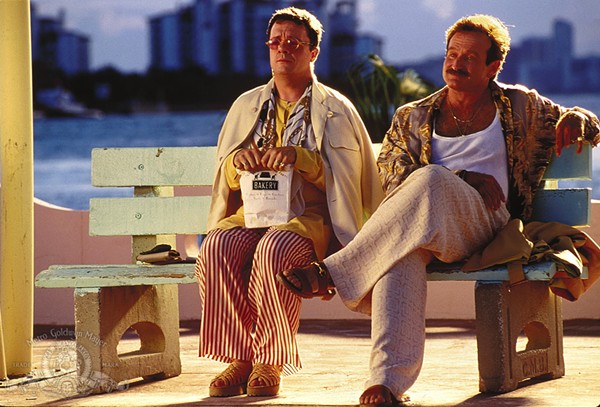 The Bijou is screening yet another Robin Williams film this week. The free movie this Thursday is The Birdcage, the one where Robin Williams and Nathan Lane are lovers that have to pretend to be straight in order to impress Gene Hackman. Free, 7pm Thursday, Santikos Bijou Cinema Bistro, 4522 Fredericksburg, (210) 734-4552, santikos.com

Set in an enchanted Scottish village that appears but once a century, Alan Jay Lerner and Frederick Loewe’s elaborate musical Brigadoon found staying power on 1940s’-era Broadway thanks to a winning mix of stellar dancing, memorable show tunes and a plot fusing romance with fantasy. Although it scored three Oscar nods and sparked an Emmy-winning TV movie, director Vincente Minnelli’s fairly faithful MGM adaptation got dissed by The New York Times as “curiously flat” and “pretty weak synthetic Scotch.” Beyond its fairy-tale appeal and vintage charm, the 1954 film is distinguished by fanciful sets, covetable costumes by Oscar winner Irene Sharaff and dance sequences that showcase the legendary talents of Cyd Charisse (as nimble lass Fiona Campbell) and Gene Kelley (as American hunter Tommy Albright). As part of its 60th anniversary film series, the McNay brings Brigadoon back out of the mist with a screening of Minnelli’s G-rated gem. Free, wine reception at 6pm, film at 6:30pm, McNay Art Museum, 6000 N New Braunfels, (210) 824-5368, mcnayart.org. –Bryan Rindfuss

In conjunction with the exhibit “Firearms of the Texas Frontier,” the Alamo and Slab Cinema co-host an outdoor screening of John Ford’s landmark Western starring John Wayne in the role of Ethan Edwards, a civil war veteran who spends years in pursuit of his niece Debbie (Natalie Wood), who was abducted as a child only to become the squaw of a Comanche chief. Free, 6:30pm, The Alamo, 300 Alamo Plaza, (210) 225-1391, slabcinema.com