It just wouldn’t be Christmas without that animated special about a certain red-nosed reindeer. This season, forget the TV set as Rudolph’s coming to life onstage for his 50th anniversary. Cozy on up on the Island of Misfit Toys as the beloved classic characters (Elves! Santa! Bumble, the Abominable Snow Monster!) come to life through puppetry and song. For an added holiday treat, snag a ticket for Lunch with Rudolph, a pre-show event that includes photo ops with the cast and North Pole delicacies such as turkey, gingerbread, and hot chocolate. $18.50-$44.50, 7pm Monday, 2pm and 7pm Tuesday, 2pm Wednesday, Tobin Center for the Performing Arts, 115 Auditorium Circle, (210) 223-8624, tobincenter.org.

Tuesday, December 23
Garrett Capps and The Only Hipsters

On Garrett Capps’ “San Antone,” the cagey songwriter pins down the Alamo City’s musical culture with verve and an insider’s knowledge. “I found myself down a deep, dark road / empty pockets and a wayward soul / then I heard somethin’ on the radio / sounded like San Antone. / It had deep blues roots, and a Vox organ / a groovy shaker, and a Fender tone / it said ‘she’s about a mover’ and I was gone / gone home to San Antone.” $5, 9pm Tuesday, 502 Bar, 502 Embassy Oaks, (210) 257-8125.

Charles E. Sellier Jr. directs this ‘80s-era cult classic about a young boy who witnesses his parents’ brutal murder at the hands of a man in a Santa suit on Christmas and slowly emerges as a serial killer himself. $10, 9:50pm Tuesday, Alamo Drafthouse Park North, 618 NW Loop 410, (210) 677-8500, drafthouse.com.

Launched in 2012, the hyper-local video magazine Vi//ZiNE showcases the music and skate scenes, visual artists and other “things going on in San Anto, Tejas, you may not know about.” In an effort to jump-start its forthcoming seventh edition, the DIY outfit takes over Bottom Bracket Social Club with a fundraiser stocked with back issues, T-shirts and “other goodies for ya to snag.” In addition to outdoor screenings of Vi//ZiNE’s most popular issues (based on YouTube views), the Relapse Party includes performances by local hip-hop acts, including Mr. Composition, Zerk Tronic and Pagan Gold. Free, 7pm Tuesday, Bottom Bracket Social Club, 1603 N Colorado, (210) 267-9160. 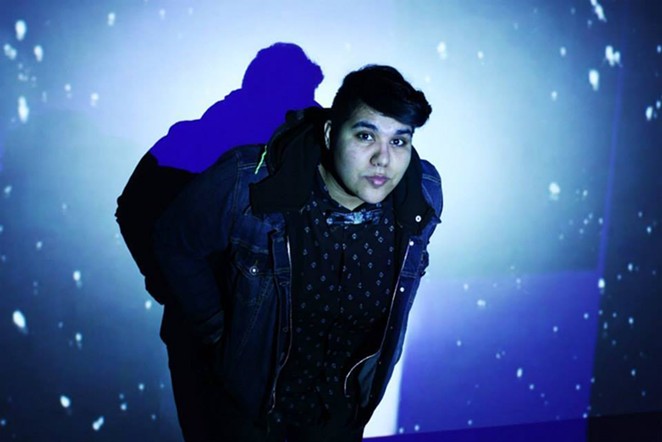 If you’re looking to escape to a place where soul-warming tunes replace visions of sugarplums, Hi-Tones has got you covered. This special show will feature a homecoming performance by Alyson Alonzo (formerly of Sugar Skulls), who has relocated to San Fran, but is back home for the holidays. Alonzo’s trance-inducingly powerful voice, which manages to be delicate and immense in equal measure, will be the main focus as she runs through her ever-growing catalog of originals and favorite covers. Hi-Tones will also be collecting donations of blankets for those in need. Arrive early to catch Chulita Vinyl Club. $2, 9pm Wednesday, Hi-Tones, 621 E. Dewey, (210) 785-8777.