10 Facts About Elvis in San Antonio 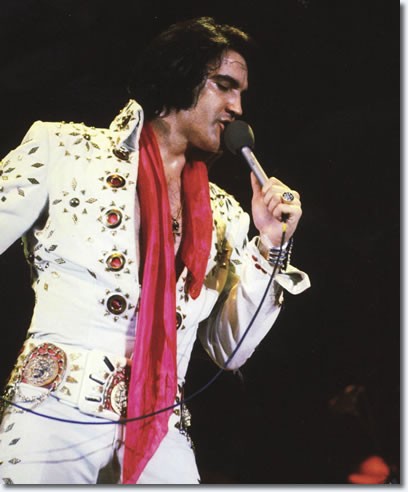 Today would've have been Elvis Presley's 80th birthday. To celebrate we thought we'd give you some San Antonio-related trivia about The King.

1. The rock 'n' roll icon performed in San Antonio a total of nine times. His first stop in the Alamo City was on January 15, 1956, when he played two shows at Municipal Auditorium. His final SA concert was 20 years later on August 27, 1976 where he played at Hemisfair Arena. Presley performed in San Antonio two more times in 1956 and again in 1972 and 1974. Every SA show was a sold-out performance. Here's a 1956 interview with Elvis in San Antonio.

2. In October 1956, Presley was made an honorary member of the Beautify San Antonio Association and was even given a badge that said "Elvis Refuses to be a Litter Bug."

3. The film Elvis on Tour included footage from his 1972 concert in San Antonio. The movie was Presley's final film and it won the 1972 Golden Globe Award for "Best Documentary." It was the only Elvis film to receive any type of major award recognition.

4. Elvis's publicly debuted his last Top 10 hit, "Burning Love," at the 1972 SA concert. The song was so new to Presley that he had to use a lyrics sheet to perform the song, as seen in the film Elvis on Tour.

5. As we noted on our slideshow "15 More Bits of San Antonio Trivia," a San Antonio native is responsible for one of Elvis Presley's most iconic moments, the title dance sequence from Jailhouse Rock. Alex Romero was born in San Antonio in 1913 after his mother escaped political unrest in Mexico. He choreographed the classic title dance sequence and conceived the costumes and set design for the number. The scene is regarded by many music historians as the forefather to the music video and one of Presley's greatest moments on screen.

6. Kay Wheeler, who was founder and president of the first national Elvis Presley fan club, met The King in San Antonio for the first time at his April, 1956 concert at Municipal Auditorium. The two were involved in a romantic relationship during the height of Elvis mania in the 1950's.

7. Presley covered "San Antonio Rose" by Bob Wills and the Texas Playboys. Elvis recorded his version in his home studio. It appears on the album "Elvis: The Home Recordings" released in 1998. Listen to The King's version here.

8. It's been reported that the highest price ever paid for a piece of Elvis memorabilia was for Presley's iconic peacock jumpsuit, which he wore during his 1974 San Antonio concert. An undisclosed Elvis collector purchased the outfit, which is said to be Presley's favorite, for $300,000 in 2008. The suit was back on the auction block last year at Sotheby's where it sold for $245,000.

9. August 12, 1976 was proclaimed “Elvis Presley Day” in San Antonio. The King was given an official proclamation backstage before his final SA concert by popular weather man and then City Councilman Glenn Hartman.