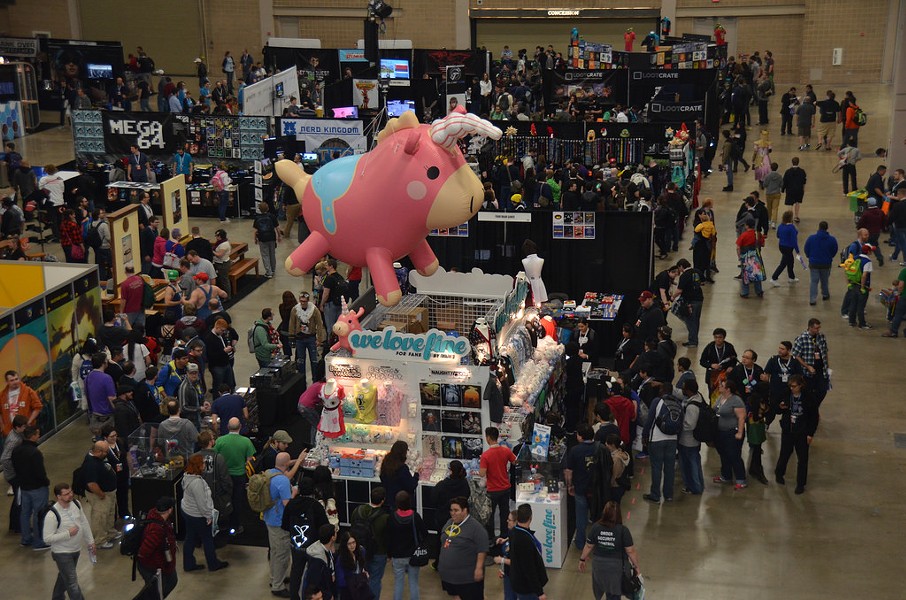 Penny Arcade Expo (PAX) is a different kind of convention than Alamo City Comic Con and other pop culture events. The expo is completely dedicated to gaming, tabletop and video games. Web comic artists Jerry Holkins and Mike Krahulik started it in 2004. Since then, PAX has grown into a national phenomenon with five different conventions throughout the year. This weekend was the first time PAX had taken place in San Antonio.

The convention ran extremely popular panels all day Saturday. Sid Meier, creator of the popular Civilization titles, and his team talked about their new title Starships. In the game, players manage a fleet of spaceships as they seek to expand the reach of their federation by completing missions and upgrading and customizing their ships. In another panel, YouTube gaming stars “SeaNanners” and company answered sobering questions about the hard work and long hours they put into sustaining their unlikely career of playing video games.

By far, the most widely attended panel I saw featured the hosts themselves, Holkins and Krahulik. I had to sit in the balcony because nearly every seat in the Lila Cockrell Theatre was taken. While Krahulik drew panels for their latest comic, projected on big screens surrounding the stage, Holkins entertained the audience and answered fan questions.

The biggest attractions for attendees, of course, were the wide variety of games available for demo. GoGigantic erected an enormous booth where people waited over an hour to get their hands on their new game, Gigantic. It’s an online, multiplayer PC game in which two teams face off , trying subdue your adversaries’ monsters before they take down your own. Dreadnought, a naval battle online PC game set in space, looked gorgeous. Watching the action on a big screen reminded me of the Halo franchise in its overall style. Throughout the event, famous game streaming company Twitch ran interviews with game developers, featuring content from both big developers and indie darlings. Nintendo, also showed off their new 3DS model and allowed players to demo their upcoming titles The Legend of Zelda: Majora’s Mask and Monster Hunter 4 Ultimate.

One thing that surprised me was the turnout by fans of tabletop and trading card games. At packed tables, card gamers battled each other in Sentinel Tactics – a competitive, superhero board game – and the widely played Magic: The Gathering. In fact, MTG had their own enormous booth where they ran frequent tournaments. This area was arguably as packed as the video game showroom floor.

Will PAX South return to San Antonio in 2016? The future is uncertain, but hints dropped by Holkins during his "Make a Strip!" panel inspire hope. Briefly, he noted how packed the showroom floor was and how the Henry B. Gonzales Center fit their needs as a convention space (compared to the troubles they had in Australia). I’m paraphrasing here, but Holkins said things were generally going well and that they would to love to return. If this year has been any indication, we have reason to believe they will come again next year.