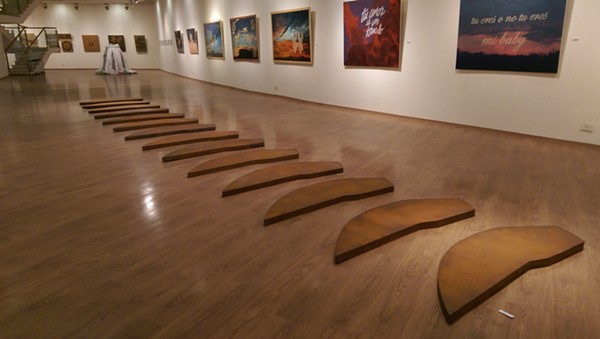 Local art fans will likely connect the name Bill FitzGibbons with Blue Star Contemporary Art Museum (where he served as executive director from 2002 to 2013) and Light Channels (a computer-controlled LED installation that turns I-37 underpasses at Commerce and Houston streets into Technicolor experiences). Those who keep close tabs on the accomplished sculptor/public artist/curator may also associate him with such foreign affairs as Blue Star’s Berlin residency program (early results from which are currently on view as part of the Contemporary Art Month exhibit “Back from Berlin”) and the Icelandic Cultural Exchange, an initiative that brought architect/sculptor Gudjon Bjarnason to San Antonio in 2011 to create “large-scale exploded sculptural objects” with assistance from an SAPD bomb squad.

Upon his departure from Blue Star, FitzGibbons began channeling his interest in “creating a dialog between international artists and San Antonio artists” into “Texas!” — an ambitious exhibition that involved crating and shipping works by 13 Texans (SA’s own George Schroeder and Ricky Armendariz among them) overseas to the National Academy of Art in New Delhi, India. Supported by the Texas Commission on the Arts and the Crow Collection of Asian Art and officially sponsored by the United States Embassy in New Delhi, “Texas!” attracted hundreds of guests to a reception attended by the likes of SA native Greg Pardo, who once worked as a a legislative assistant to Joaquin Castro and is now a consular officer based in Calcutta.

Commemorated in a forthcoming catalog organized by New York-based curator Lily Wei, the New Delhi exhibition remained on view for only three and a half weeks but prompted a discussion among participating artists about an extended dialog between Texas and India. According to FitzGibbons, that discussion formed “the main impetus for the beginnings of the Lone Star Art Alliance.”

Spearheaded by FitzGibbons and Dallas-based sculptor George Tobolowsky, Lone Star Art Alliance is still in its nascent stages but plans to solidify a board, apply for nonprofit status and explore further exhibition opportunities across India (in Chennai, sister city of San Antonio, and Calcutta, sister city of Dallas), as well as Italy and Iceland. The Alliance also plans to host visiting artists, the first of which will be New Delhi-based visual artist and curator Devanshi Agarwal.

For more about the Lone Star Art Alliance, stay tuned to sacurrent.com and billfitzgibbons.com.