It was dark out when I pulled up to the Fox Motel to check out the "Seven Minutes in Heaven" exhibit. I had to park in the mud and trudge my way over to the rooms in the sprinkling rain. Perfect, I thought. This weather is really setting the mood for the dirty, grimy stuff I’m about to encounter.

[Slideshow: 37 Photos Of The Seedy Exhibitionism During ‘Seven Minutes In Heaven’ At Fox Motel] 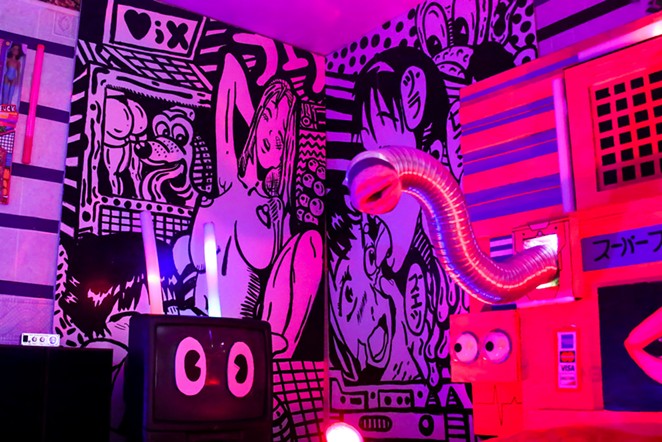 Propelled by my high from the weirdo Japanese sex machine in the first room, I hurried into the next. There was a bunch of fruit on the bed. You could eat the fruit. I get it. Seeds and fertility and genitalia. Where’s the sex though?

The next room I entered was equally disappointing. As I made my way in, a girl was throwing herself onto the bed and laughing. She must be part of the installation, I thought. But no. She was just drunk. I realized this when she almost spilled the contents of her Red Solo onto my jacket as she shoved her way out of the room.

The bed in there had whips strewn all over it. I think I saw a horse bit too.

Moving on, a little disenchanted but still eager for more of the super sexed-up content the exhibit promised, I made my way into a room with photos all over the bed. And photos on the walls. And maybe photos in the closet—I’m not sure. But what was definitely in the closet was a wheelchair. The wheelchair was in the photos too. The photos’ subjects were placed in various poses with the wheelchair: some nasty poses, some just odd positions you shouldn’t be in with a chair of any kind.

My friend sat in the chair and took a picture.

In that room, though, there was a video being projected onto a white curtain covering the bathroom. The video was an animation of two people cycling through various sexual positions. I was really impressed by it and I looked around to see where the projector was hiding when a guy stormed into the room and rushed behind the curtain, yelling, “NOBODY LOOK! She said I could do this!” He was about to use the toilet. And you could totally see through that flimsy white curtain. Ah, well. On to the next room.

The next room I managed to squeeze into was pretty empty except for a couple of tacky shell-shaped dishes filled with tubes of lip balm. There was a note asking visitors to please help themselves to the balm and to leave a little smooch on the mirror there. I looked at the mirror—it was covered in lip prints and oily nose smudges. Some people (who I guess were too scared to press their lips to a piece of glass in a motel room) had chosen to draw lips instead of leaving a kiss. I grabbed a tube and headed out.

The last room I visited had a sign posted outside: This is Not a Staring Contest. Inside was a man sitting atop a dresser. He had a microphone and so did his female guest who was seated on the bed. I liked the concept of this room — you could go in and sit with the artist and just gab about whatever you wanted to. He was going to talk to you no matter what.

While I waited in the room’s doorway, the guest inside was talking to the man about fingernail polish. I checked the time on my phone and looked around outside. It was getting colder and the sprinkling rain was a heavier drizzle by then. The lights from the video being projected onto the wall behind me were giving me a headache.

I resolved not to stay in line to chat with the man in the room.

I didn’t find the puppet show, and I didn’t buy the coloring book.