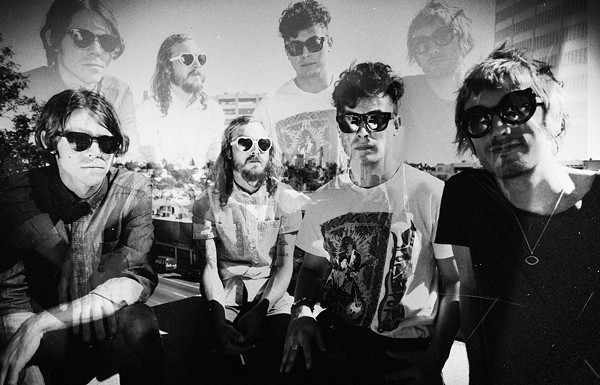 Corners headlines this Lolipop Records SXSW spillover gig, playing understated riffs with a mischievous vibe. In the video for “Pressure,” the band, impeccably dressed, lays down their brooding outlook. As the music glides on a slippery surf guitar line, a quartet of skaters carve out a long hill and humiliate an innocuous boyfriend in front of his squeeze. Later, when the song’s eponymous refrain kicks in, the boy learns that the crew’s leader has stolen his girl. In a little under four minutes, “Pressure” proves the band’s other man/woman allure, a dark and sumptuous sound. With Psychomagic, Adult Books, The Sloths, The Electric Magpie, Cobalt Cranes, Tele Novella, Kim and the Created, Winter, DJ Proper Yarn. $5, 8pm Monday, 502 Bar, 502 Embassy Oaks, Suite 138, 257-8125, 502bar.com.

Whatever you did for your most recent birthday, chances are it wasn’t half as cool as the one-night rap extravaganza Saytown rapper Guuru Sagod has cooking for his. We’re talking about a list of performers more than 20 deep — a veritable cornucopia of local hip-hop talent. Aside from the MTVu-lauded birthday boy (pictured), we are particularly excited to catch perennial Blacknote badass Kree23, uber-raunchy leftfield rap antagonists Dead the Poets, talented and passionate wordsmith Mr. Composition, seasoned battle rapper KT Da Titan and King Kyle Lee, an Alamo City Boy and creator of rad Spurs-centric bangers. $10-$15 (free before 9pm), 7pm Tuesday, Nesta, 122 Nogalitos, 354-3399.

On Wednesday, March 18, the Ruth McLean Bowman Bowers Visiting Scholar Lecturer Sara Seager, professor of planetary science and physics at MIT, will present “The Search for Earth 2.0" as a part of Women’s History Month. The event begins with a reception at 5:30 p.m. and the lecture at 6 p.m., in the Center for the Sciences and Innovation (CSI) Room 437. Free, 5:30pm Wednesday, Trinity University, 1 Trinity Pl., trinity.edu.