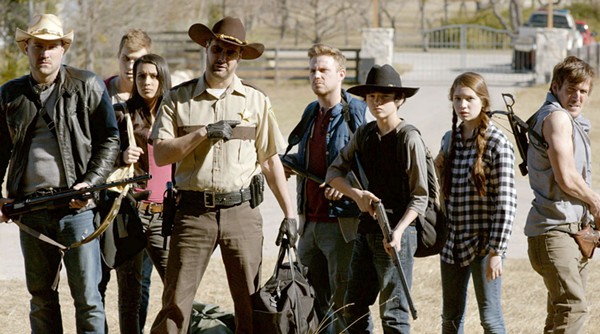 These days, if a director or screenwriter wants to jump brain first into the zombie subgenre, he or she better have one hell of an idea for it to stand out from the crowd. Throw the word “spoof” into the mix, and the mission is likely to be damn near impossible. Unless there’s a fun story attached to all the mayhem audiences are anticipating, a few severed limbs and an army of teeth-gnashing corpses really aren’t going to do much that hasn’t been done before.

Most notable in recent years, zombie movie spoofs like Shaun of the Dead and Zombieland have been able to find a way to keep the subgenre fresh with some solid direction and storytelling. Unfortunately, what movies like those two also do is put a glint in the eyes of lesser filmmakers ready and willing to piggyback on just about anything people are talking about while standing around the water cooler, especially if it means there are potential dollars to be made. While some production companies might be laughing all the way to the bank, audiences will be left wondering how the heck something as painfully bad as The Walking Deceased was able to find its way out of the shadows of the better movies it imitates. With this mockbuster, director Scott Dow and writer/actor Tim Ogletree have made a flick with zero laughs and no creative drive whatsoever.

Borrowing heavily from the hit TV series The Walking Dead, and zombie movies including Dawn of the Dead, Warm Bodies, and the aforementioned Shaun of the Dead and Zombieland, isn’t the problem for The Walking Deceased. That’s what spoofs do, of course. What they aren’t supposed to do, however, is stick to the same tired jokes and lame zombie clichés we’ve seen countless times before. Instead of looking at these movies as a springboard to give audiences something at least a bit different, Dow and Ogletree simply recycle the same zombie shtick from one unfunny scene to another as if they were going down a zombie movie checklist. In one missed spoof-worthy opportunity, actor Troy Olgetree stars as Romeo (other characters mispronounce it as Romero – get it?), a carbon copy version of the character actor Nicholas Hoult played in the 2013 romantic zombie comedy Warm Bodies. Besides the slight meta humor it goes for, Romeo’s inner dialogue is witless and his handful of lowbrow boner jokes don’t register even on a lowbrow boner joke level.


In one humorless and mean-spirited scene that comes early in the movie, the annoying main character Sheriff Lincoln (Dave Sheridan, who was hilarious as a nunchakuing convenient store weirdo in the 2001 dark comedy Ghost World), a caricature of Rick Grimes’ sheriff in The Walking Dead, shoots a little girl in the head even after she tells him she isn’t infected and is only looking for her parents. Call blowing away a 10-year-old kid daring if you want, but the scene falls flat and indicates what’s in store for next the 80 minutes.

Since The Walking Deceased is right on par with the typical idiocy filmmakers Jason Friedberg and Aaron Seltzer always offer with rubbish like Date Movie, Epic Movie, Disaster Movie, etc., one might wonder why this movie isn’t called Generic Zombie Movie Spoof. Sheriff Lincoln sums it up perfectly during an early scene where he makes a joke that no one understands. “Did humor get killed off in the apocalypse, too?” he asks. In the case of The Walking Deceased, apparently, it did.