Felipe Andres Coronel, best known by his glorious emcee name Immortal Technique, is a bad motherfucker. Since 2001, Technique has proven himself as a rapper whose knack for lyricism and hip-hop delivery is matched only by the blunt force and vitality of his call to arms. In music that’s certainly not for the faint of heart, the emcee rails against cycles of violence and addiction, economic injustice, racism, capitalism and the superficiality of popular culture. On stage, Technique is a ball of righteous fire, exploding with anger sharpened by a philosopher’s sense of social critique. $20-$30, 8:30pm Thu, Alamo City Music Hall, 1305 E. Houston St., scoremoreshows.com. — James Courtney 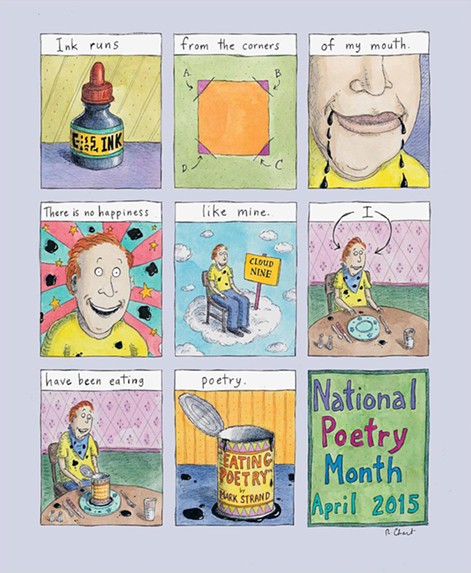 Since 1996, April has been designated as National Poetry Month, a global celebration of “poetry’s vital place in our culture.” Billed as the largest literary celebration in the world, NPM takes shape locally through an array of happenings that overflow into May. Beyond community events like Bihl Haus Arts’ Go! Poe Reading (2pm Sat, 2803 Fredericksburg Rd.) and UNAM’s Voices, Vibes and Visions (7:30pm Sat, 600 Hemisfair Plaza), the first crop of offerings includes Twitter-driven calls for entries (such as the Witte’s Fiesta Royalty Haiku and San Antonio Public Library’s Tweet a Poem!) and the decidedly DIY incentive SLAM The Town. Visit npmsa.com for details. — BR

When Bugs Bunny on Broadway (aka Bugs Bunny at the Symphony) débuted back in 1990, there was a not-so-subtle irony in having classic Looney Tunes episodes play before the stiff opera house crowds they were made to parody. But then Merrie Melodies animators likely had a clue that their cartoons would serve as so many people’s first (and often only) exposure to classical standards. Such were their influence that even today it’s hard to hear “Figaro’s Aria” without picturing Bugs in a barber’s outfit or “Flight of the Valkyries” without hearing Elmer Fudd singing “Kill the Wabbit!” A 25th anniversary update, Bugs Bunny at the Symphony II finds the Looney Tunes crew with the full backing of the San Antonio Symphony to revisit their most classic(al) moments. Besides Bugs episodes, there’ll be a wide sampling of other symphonically-minded Looney Tunes selections from Daffy Duck, Pepe Le Pew, Tom & Jerry and even a couple of new Warner shorts made specifically for the show. $25-$65, 8pm Fri-Sat, The Majestic Theatre, 224 E. Houston St., (210) 226-3333, sasymphony.org.
— J.D. Swerzenski

Everything is dandy in Saint-Tropez until the “Tradition, Family and Morality Party” shows up. In La Cage Aux Folles, Georges, the owner of a glitzy drag club, and his partner Albin, the club’s star performer, experience an upheaval of their charmed lives when Georges' son arrives with his fiancée and her homophobic parents in tow. From there, antics ensue, love is tested and disguises are worn. Based on a 1973 French play, the Tony-winning musical comedy (which inspired the 1996 film The Birdcage) lands at the Woodlawn under the direction of Tim Hedgepeth. $17-$26, 7:30pm Fri-Sat, 3pm Sun, Woodlawn Theatre, 1920 Fredericksburg Rd., (210) 267-8388, woodlawntheatre.org. — Murphi Cook

More than 200 established and emerging artists and artisans are expected at the Starving Artist Art Show in La Villita, a tradition since 1963. The brainchild of Reverend Paul Soupiset (whose tireless efforts to raise funds for the needy earned him the nickname “The Beggar of La Villita”), the weekend event was devised to showcase struggling local artists while also supporting the Little Church of La Villita’s year-round food assistance program. A portion of proceeds from the 53rd annual show will benefit the elderly, widows and widowers, veterans and others in need. Free, 10am-6pm Sat-Sun, La Villita, 418 Villita St., (210) 226-3593, getcreativesanantonio.com. — BR

Vusi Mahlasela is a celebrated South African singer-songwriter whose music is steeped in the emotions of a never-ending quest for justice and freedom. His songs combine elements of South African folk music with the loose structures and improvisational bent of jam band rock. That his struggle music eschews resentment in favor of love and forgiveness is a true testament to Mahlasela’s beneficence. Like his message, Mahlasela’s voice resonates deeply — a breath of dewy sunlight, generous and full of optimism at the end of a long night. Essential tracks include “When You Come Back” and “Say Africa.” $35, 8pm Sat, Jo Long Theatre, 226 N Hackberry St., (210) 207-7211, thecarver.org. — JC