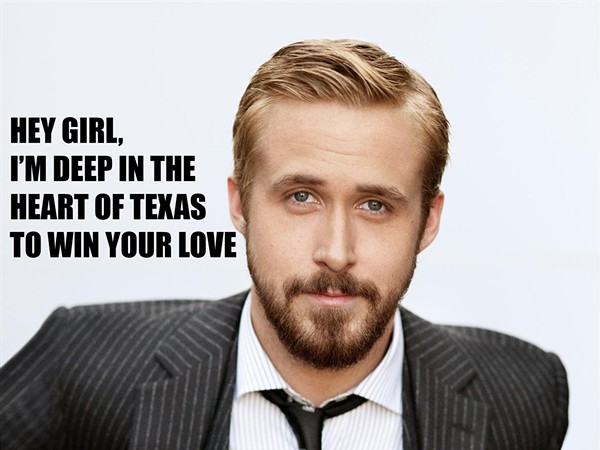 So it turns out that Ryan Gosling is not gracing San Antonio with his presence. He was in Austin last night for a screening of his directorial debut "Lost River" at the Alamo Drafthouse, marking this the first time ever that an Alamo reference did not refer to San Antonio. It still would've been funny to catch him eating a turkey leg at Oyster Bake, though.

Actor, musician, director, men's style icon, and all around perfect human being Ryan Gosling is apparently here in San Antonio, if his official Twitter account is to be believed.

Battle to the Alamo! Flight canceled. Driving in rain storm from Houston to get there!

What he and his wife Eva Mendes are doing here, we don't know. Maybe he really wanted to see Naughty by Nature at Oyster Bake. Or perhaps he's a Spurs fan and is here for the playoff game on Sunday.

We thought about putting on our SA visitor's bureau hat on and coming up with a list of must-see places and must-do activities for Ryan Gosling's Alamo City visit, but there is really only one thing that he should do on his visit to our fair little city: drink himself.

Ryan, if you're reading, head over to a bar on The Strip called TBA (2801 N. St. Mary's St.), and order the Rye 'N' Gosling, Jonny Yumol's cocktail creation named after everyone's favorite former Mousketeer. What's in it? Gosling's Black Seal Rum, rye whiskey, cinnamon syrup and bitters. The drink has a little edge, just like the man it's named after.

Anyway, if you see Ryan and Eva out and about, be totally chill about, OK? But if you see him at Fiesta, please try to get a stealth shot of him eating a funnel cake.