Enigmatic, unpredictable and accomplished are but a few of the words that come to mind when considering Jesse Amado, a San Antonio artist who’s represented in collections stretching from the McNay to the Smithsonian. A former firefighter, Amado’s been known to turn everything from dangling crystals to yards of fringe into conceptual works exploring themes of seduction, beauty and romance. Drawing from his personal experience with illness, Amado’s latest body of work employs richly colored virgin wool felt cuttings to address “the gamut of ways that pharmaceuticals inflect our daily lives.” Ranging from orderly grids of pill-inspired shapes (Nine Tablets, above) to draped arrangements of felt scraps (Consequences #1, below), “30 Day Rx” marks the 70th exhibition arranged by Ruiz-Healy Art, an Olmos Park gallery specializing in “contemporary and modern art with an emphasis on Latin American and Texas-connected artists.” Free, 6-8pm Thu, Ruiz-Healy Art, 201-A E. Olmos Dr., (210) 804-2219, ruizhealyart.com. Through June 6. — Bryan Rindfuss

As National Poetry Month comes to a close, the good folks of the URBAN-15 performance group invite you to partake in Mega Corazon. The poetry-centric event will feature a diverse group of 15 poets, including the Alamo City’s inaugural poet laureate Carmen Tafolla, over the course of six hours. Taken as a whole, this special reading showcases “San Antonio’s rhythmic and pulsated voice, its rainbow of life,” in the richest possible way. And if you find yourself still a bit hungover from Fiesta and unable to attend, fret not — the whole thing will be live-streamed at urban15.org. Free, 4-10pm Thu, URBAN-15 Studio, 2500 S. Presa St., (210) 736-1500, megacorazon.com. — James Courtney 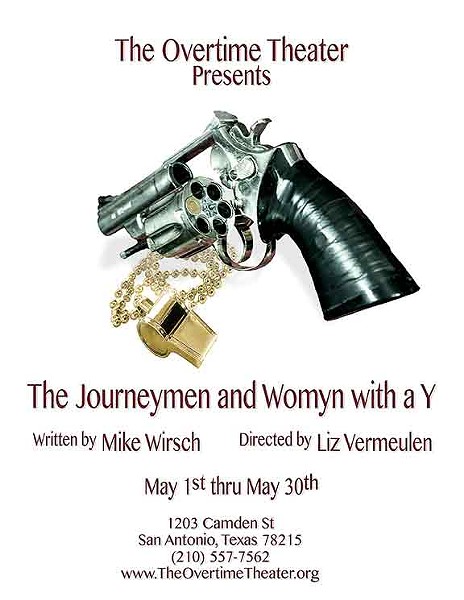 Written by Mike Wirsch and directed by Liz Vermeulen, the Overtime’s latest dystopian drama brings together an absurd cast of characters (Satan, SuperPope, members of a suicide cult and “the most uninteresting man in the world”) for a Russian Roulette tournament. $10-$14, 8pm Fri-Sat, The Overtime Theater, 1203 Camden St., (210) 557-7562, theovertimetheater.org. Through May 30. — BR Two single siblings inside their dead parents’ house, one movie star, a grove of nine cherry trees, and one freakishly handsome lover named Spike: This is not an Anton Chekhov play. Christopher Durang hijacks characters and themes from the famed Russian playwright and forces them into a house in present day Bucks County, Pennsylvania in his comedy Vanya and Sonia and Masha and Spike. Following the siblings as they hash out their ancestral home’s uncertain future, the play may lack some of the absurdity that Durang is most famous for, but it certainly promises belly-busting laughter over love, heartache, and sibling rivalry. Familiarity with Chekhov not required. $10-$25, 8pm Fri-Sat, 3pm Sun, Classic Theatre of San Antonio, 1924 Fredericksburg Rd., (210) 589-8450, classictheatre.org. Through May 17. — Murphi Cook

Perhaps the brightest young star in a genre that feels like it could really use them, Texas’ own Kacey Musgraves rightfully garnered glowing praise, inside and outside the country music community, with her stellar 2013 album Same Trailer Different Park. Now, she’s got a cute but snarky new single out, “Biscuits,” and she’s slowly ramping up to the yet-to-be-announced release of her highly-anticipated follow-up. Our advice is to catch this brilliant and defiant young performer while you still can — soon enough it’ll be all arena shows and big stages for Musgraves. $23-$28, 9pm Sat, Floore’s Country Store, 14492 Old Bandera Rd., (210) 695-8827, Helotes, liveatfloores.com. — JC

Along with all the flowers made possible by those April showers, the month of May brings a wild array of lowriders to the Deco District. A San Antonio signature since 1982, Centro Cultural Aztlan’s Lowrider Festival debunks stereotypes while celebrating tricked-out rides as “mobile works of art” showcased in a family-friendly environment. Much more than a gathering, the 33rd annual event features festival fare, arts and crafts vendors, live music and a competition awarding cash and trophies to winners in more than 30 categories — including Best Lowrider Bike and Best Bomb. $7, 10am-7pm Sun, Centro Cultural Aztlan, 1800 Fredericksburg Rd., (210) 432-1896, centroaztlan.org. — BR