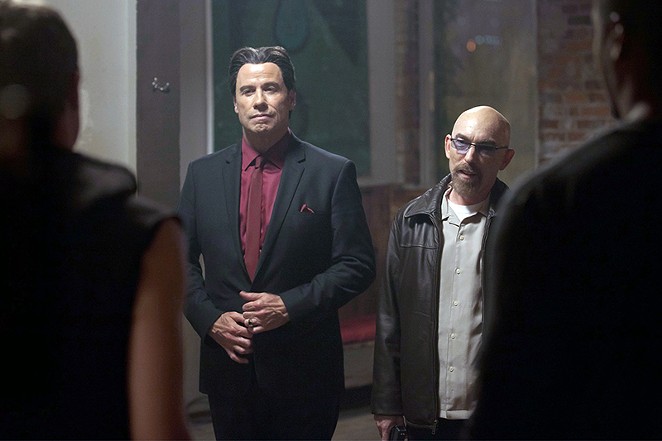 While he’s worked with some of the best filmmakers in the business, Oscar-nominated actor and San Antonio-based production company owner Jackie Earle Haley (Little Children) was inspired to step behind the camera long before he found himself on the same set as Steven Spielberg, Martin Scorsese and Tim Burton. For Haley, it started as soon as he began his career as an actor when he was eight years old.

“I remember I would pay full attention to what the director was doing all the time,” Haley, 54, told the San Antonio Current during a phone interview. “Then when I was 11, my mom bought me a Super 8 film camera. It was something I always wanted to do.”

Forty-three years later, Haley finally gets the opportunity to show what he can do with a feature in his directorial debut Criminal Activities. The film stars John Travolta as a mob boss who forces a group of young men to pay off their debt to him after they lose his money in the stock market. Haley also stars in the movie as Travolta’s right-hand man.

Criminal Activities screens as part of the 21st Annual San Antonio Film Festival on Saturday, Aug. 1 at 9:15 p.m. at the Tobin Center for the Performing Arts. Tickets are $10.

How did Criminal Activities become your first film as a director?

It really came out of the blue. I got a call from the producer, who is married to my manager. He really felt like I could direct it. He sent me the script and said he would understand if I didn’t respond to it. So, I read it and loved it. I was super excited about it. I called him back within three hours and was like, “I’m in!” When Travolta agreed to come on board, we were off and running.

You’ve been in this industry for a long time. Why didn’t directing every come up before?

It can be really tough to become a director in the film industry. You have to find a really good script or write one yourself. That’s hard to do. Then it’s tough to get a studio to greenlight your film or find a way to raise the money independently. I remember around when I was about 30, I made a short film to show people I could do it. But nothing really came out of that. I was bummed. Then 40 came along and I kind of just gave up.

I don’t think I was copying style or anything like that, but I’ve picked up stuff from every director. I picked up on how directors would interact with me as an actor. It’s all been very influential. Since I was always paying attention to what they were doing, it’s been a better-than-college-experience on how to make a movie.

Would you say directing came natural for you?

It did. People on set can get pretty leery about working with a first-time director, but I remember our producer telling me he was waiting to see me with that deer-in-the-headlights look and that he was really surprised when it never came. I think all that time I spent on set as an actor gave me this natural ability. I really had this deep-seated knowledge about what was happening on the set. It felt like I had done it 10 times before. It was definitely a dream-come-true experience.

What were some of the challenges pulling double duty as a director and actor on the same film?

Well, I’m grateful that I wasn’t the lead [actor] in this movie. It would’ve been doable, but I kind of preferred a supporting role. My role is like the perfect-sized role. What is really cool about technology these days is that you can record scenes and immediately see playback. So, I would shoot like three or four scenes and then I’d be able to look at them on the monitor. It was fun to search the way to approach this character.

Would you ever think about shooting a film in San Antonio or are the film incentives in other states just too attractive to ignore?

San Antonio is the first place that I’d like to shoot something. It would be absolutely wonderful to be home while shooting a movie. Tax incentives are better in other states, but you never know if the material will call for a place like San Antonio. I’m hoping that happens eventually.