Together with Central Library’s “Art About Art” (which closed July 31), Texas A&M’s “The Southwestern Clichés” (on view through September 27) and the Guadalupe’s “Getting the Big Picture” (on view through October 24), FL!GHT Gallery’s new exhibition “Sex & Cinema with Mel Casas” rounds out a citywide tribute to late artist Mel Casas (1929-2014). An El Paso native, Casas played a key role in San Antonio-based Chicano art group Con Safo in the ’60s and ’70s, landed in the 1975 Whitney Biennial and taught “a generation of artists” during his 29 years at San Antonio College. Originally sparked by a glimpse of a drive-in movie screen (on which a close-up image of a woman appeared to be “munching” trees amid the landscape), Casas’ epic Humanscapes series (1965-1989) serves as a common thread between all four exhibitions. Curated by art historian/educator/author Ruben C. Cordova and encompassing nearly half of the 150 large-scale paintings that make up Humanscapes, the quartet of shows touches on myriad themes — from Chicano identity and Nixon-era politics to pop art and censorship. Rooted in Casas’ view of cinema as a “fantasy machine” and the drive-in as “a place for sexual experience,” FL!GHT’s “Sex & Cinema” comprises 10 paintings, including some of the oldest works in the Humanscapes series. Free, 6-10pm Thu-Fri, FL!GHT Gallery, 134 Blue Star, (210) 872-2586, facebook.com/flightsa. Through August 22. — Bryan Rindfuss

Since blipping our radar back in 2012, the artist now known simply as Saakred has evolved considerably, experimenting with an array of genres (from dark electronica to “mestizaje blues”), coming out as transgender and charting unexpected territory with 2015’s Make Believe, an EP which Current music editor Matt Stieb described as “a vision of taut and emotional rock ‘n’ roll.” In an effort to raise funds to attend a five-month program at Burren College of Art in Ireland, Saakred is unveiling “Sad Boy Church,” an exhibition and sale of visual art enhanced with a short, intimate performance. Free, 6pm Fri, Esperanza Peace and Justice Center, 922 San Pedro Ave., (210) 228-0201, esperanzacenter.org. — BR

When I think of pups and cute cats, I don’t immediately free associate with hard rock. But the Rock for Paws Festival at Fitzgerald’s looks to place the two closer together. On Saturday, Rock For Paws features sets by 17 bands (including Eden Burning, Shadow Fashion and Shotgun Vendetta) to benefit the Animal Defense League of Texas. Founded in 1934, the ADL is a no-kill shelter dedicated to the humane treatment and adoption of dogs and cats. Be warned if you visit ADL’s website: You might spend a good chunk of the workday looking at adorable, adoptable pets. $5-$8, noon-2am Sat, Fitzgerald’s Bar & Live Music, 437 McCarty Rd., (210) 629-5141, adltexas.org. — Matt Stieb

Sat 8/8
The Hip Girl’s Guide to the Kitchen

Don’t let a small kitchen, lack of high-tech appliances or general fear of the stove keep you from enjoying your summer harvest through December with tips from Kate Payne, Austinite and author of the The Hip Girl's Guide to the Kitchen ($19.99 Harper Design). Payne’s stop at The Twig will kick off with a pickling demo with recipes for snacks and appetizers that showcase farmers’ market produce and impress your guests. The guide will turn you into a confident gourmand capable of whipping up classic meals and typically store-bought goods. From kimchi to yogurt — pick up techniques for jamming, preserving, roasting, infusing and braising for gluten-free, dairy-free and vegan diets and more without busting your budget. Free, 11am-1pm Sat, The Twig Book Shop, 306 Pearl Pkwy., Suite 106, (210) 826-6411, thetwig.com.
— Jessica Elizarraras 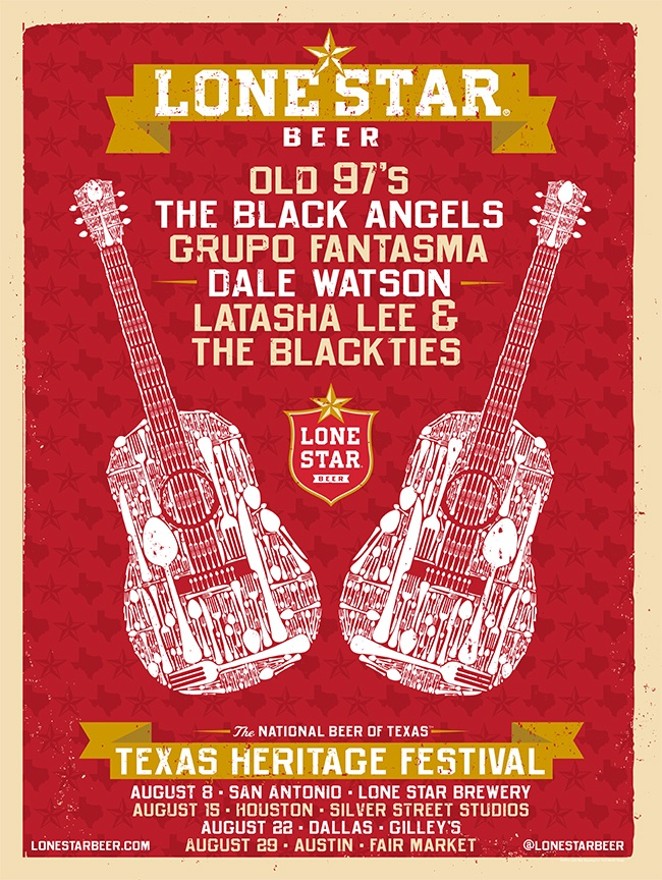 With her works steeped in nuevo-Aztlán cultural symbolism that incorporates the traditional Catholic religious imagery and themes of her childhood in South Texas, Regina Roman expertly melds the sacred and the profane, the local and the universal. The results are humorous, endearing, challenging and nothing short of brilliant. Her unique artistic vision, which becomes a kind of personal spirituality through ritual and symbolism, is Chicana-centric and decidedly melodramatic in the most rewarding of ways. Her work aims, at least in part, for the decolonization of the iconography she reveres. Free, 7-11pm Sat, Silkwörm Studio and Gallery, 1906 S. Flores St., (210) 607-1322, facebook.com. — JC After breathing new life into the Muppet franchise with the 2011 family musical aptly titled The Muppets and even winning an Oscar while doing it (“Man or Muppet” was pretty darn catchy), director James Bobin, music supervisor Bret McKenzie and the entire cast of Jim Henson’s foamy friends returned for Muppets Most Wanted, this time without lead actors Jason Segel and Amy Adams. While the 2014 sequel wasn’t as critically acclaimed as its predecessor (although why wouldn’t it be with actor Christoph Waltz dancing a waltz and a cameo by Danny Trejo?), it still provided laughs and proved fans were interested in waxing nostalgic, which is probably one of the reasons Kermit and company were given a brand new TV series on ABC, starting September 22. We’ll see if the sitcom’s Office-style format will get people to tune in. Until then, Slab Cinema is keeping the Muppets momentum going as the gang gets caught up in an international jewel heist. Tina Fey uses an Eastern Russian accent, Ty Burrell does an impersonation of Inspector Jacques Clouseau and the Muppets sing about how sequels are never as good as the original. Free, 8:15pm Sat, Mission Marquee Plaza, 3100 Roosevelt Ave., (210) 207-6968, slabcinema.com. – Kiko Martínez

Punk en español? Si, por supesto! Hailing from Madrid, Juanita y Los Feos are a dynamic punk-rock outfit that thrives on toeing the line between power and sugary sheen, between sheer motion and patience. While it wouldn’t be quite proper to call the group’s propulsive, new-wave-influenced music pop-punk, it’s certainly more in that order than, say, the other acts on this gnarly bill: SATX’s Fea and Colonia and Chicago’s Sin Orden, all of which play an infuriated, burn-the-fucking-house-down style of punk rock. In between sets of face melting, be sure to dig the spins of DJ Heavyflow, who rounds out this girl-powered show. $5, 10pm Sat, Hi-Tones, 621 E. Dewey St., (210) 573-6220, facebook.com. — JC

Tex Pop, purveyors of eccentric and eclectic exhibits on the music of South Texas, continues its run of one-of-a-kind series with “Terror in Taco Town.” Riffing on the name of a 1938 B-movie Terror of Tiny Town, the show revisits the halcyon years of punk in San Antonio — 1978 to 1986 — with an exhibit kickoff concert. Gig posters, photos and newspaper articles will largely tell the story of this era in San Antonio music, from the Sex Pistols famed ’78 date in Taco Town to the baby-kissing days of Taco Land to the deep cuts you might only know if you were actually there. That’s the beauty of Tex Pop. Each installation is an opportunity to pick the brains of the curators, getting to know the sights and smells and off-the-record hits from the era at hand. For “Terror in Taco Town,” Jeff Smith of country-punk outfit Hickoids joins as guest curator. With The Next, The Semi Automatics, Screech of Death, Heather Leather, DJ Smarty. $5-$10, 2-6pm Sun, Tex Pop, 1017 E. Mulberry, (210) 792-1312, stpcc.org. — Matt Stieb