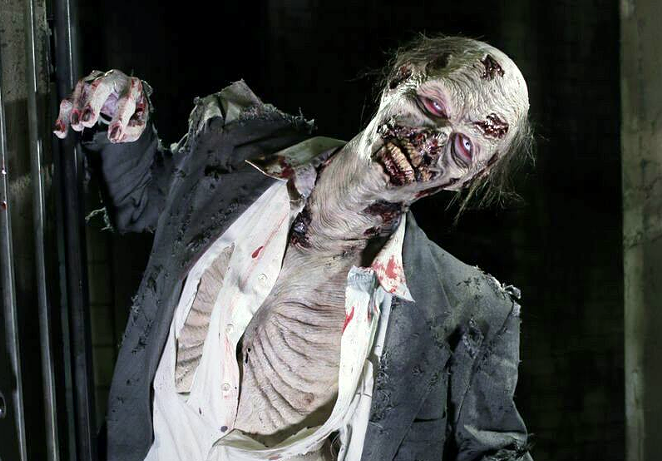 Halloween is right around the corner, jumping out at consumers like a bloodthirsty maniac. It’s now one of the most expensive holidays, after all. But now there’s a way to make some cash off of having fun and letting your freak flag fly at the 13th Floor Haunted House.

The San Antonio Current had the opportunity to low-key check out the auditions, along with interviewing some of the monsters.

The haunt looked like a scene out of a Rob Zombie-directed Goosebumps episode with dozens of actors practicing to get their monster groove-on. Growling, shrieking and a lot of snarling are popular among the monsters in training.

Armando Leal, an experienced monster, talked about his first experience trying out for the haunt.

“I assumed everybody was going to be the creepiest and meanest looking person, so I came in [to the audition] wearing the most gothic outfit I could throw together, but everyone was wearing yellow with smiles on their faces,” he said.

Take note, dressing like a Marilyn Manson wannabe is a fashion faux pas.

The 13th Floor isn’t just a place that nightmares are made of; it’s also a place where friendship is formed and lessons are learned.

“The haunt will teach you things about the outside world as well. Being one of the monsters, I can walk around outside and think every monster I see out there isn’t real. It’s a person. I’m a monster. I’m one of them,” Leal said.

Returning monster Celeste Quesada backed up his statement and said, “It’s always different when you’re behind a mask and makeup. At the haunt you feel safe because that mask and that makeup protects you. I feel happier here now. It’s like my home. I thought I was going in to the shark tank, and I came out thinking I am a shark.”

Look out for the new attraction mysteriously known as “Into the Void,” a sprawling pitch-black maze. Another fresh add-on to the haunt is zombie hotspot “Burial Ground.” “The room will be infested with zombies of all different stages,” performance director Michael Faust reveals. “There will be bloody ones, ones that are rotting, and just more of them, in general.”

In addition to revved up haunt, more monsters will be lurking around in the outside queue. Who could pass up peeing your pants before the show even starts?

All auditions will be at the 13th Floor located on 1203 E. Commerce St.