Pulling something witty and compelling out of the tricky middle ground between painting and performance is no easy task — yet artist and educator Christie Blizard thrives at that odd intersection of disciplines. An assistant professor of painting and drawing at UTSA, Blizard has contributed to upwards of 70 exhibitions but has reached an even broader demographic via numerous appearances on Good Morning America and The Today Show. By arriving on the shows’ outdoor sets with hand-painted signs in tow — emblazoned with such curious messages as “I Feel Like You Know,” “Without You I Have No Mirror” and “This May Be The Last Time” — Blizard has put a conceptual spin on a touristy practice while creating “an alternative exhibition space” that “disrupts the affects of television.” Blizard, who has also been known to mud wrestle and distribute free works of art on telephone polls, speaks at the McNay on Thursday as part of the museum’s Artists Looking at Art series. Free, 6:30pm Thu, McNay Art Museum, 6000 N. New Braunfels Ave., (210) 824-5368, mcnayart.org. — Bryan Rindfuss

Performing as Mirror Kisses, New Yorker George Clanton produces 4 a.m. bangers, with enough beat for the molly-heads to vibe to and enough texture for your suburban cousin to fall asleep to. In the spirit of Washed Out, Beach House and the host of other modern acts contained in the dream pop aesthetic into which Tides. comfortably slides, there’s a subtle undercurrent to their music (gentle at first) that draws you in closer. And like those acts, the trick lies in making the complex sound simple. Like Iggy Pop’s “Nightclubbing” or anything Grace Jones ever touched, Calico Club’s Permanent Night is a record about the bar as not only a lifestyle but a creative opportunity: the chance to perform in posture, dress and dance even if you’re not onstage. With Children of Pop. $8, 9pm Thu, Paper Tiger, 2410 N St. Mary's St., papertiger.queueapp.com. — Matt Stieb

Unless you’re too busy chatting online with babes, training to be a cage fighter or spending your summer hunting wolverines in Alaska, you might want to take a couple of hours and have a killer time revisiting this 2004 independent cult comedy so you can pick up a few sweet dance moves before the new school year begins. Actor Jon Heder plays the title role, an alienated high school teenager trying to maneuver his way through the semester alongside his politically ambitious best friend Pedro (Efren Ramirez), his equally dorky brother Kip (Aaron Ruell) and his Uncle Rico (Jon Gries), a wannabe ladies’ man who sells Tupperware. DJ Chacho from iHeartMedia will be spinning from 7-8:30 p.m. and if you get to the screening hungry, concessions will include a build-your-own tater tots bar with all the fixins and some dang quesa-dilluhs. There won’t be a tetherball tournament this time around, but do some Rex Kwan Do before the screening and you’ll likely build up a big enough appetite for some chili-cheese tots and maybe a piece of Pedro’s cake. Or do whatever the flip you want! Gosh! Free, 8:30pm Fri, River Walk Plaza, Tobin Center for the Performing Arts, 100 Auditorium Circle, (210) 223-3333, tobincenter.org. — Kiko Martínez

For all those times you were relaxing by the river and thought you could use some bass in your life, rapper Ludacris and mash-up master Girl Talk have got you covered. While it may seem that both artists are past their cultural moment, Luda and Girl Talk’s Gregg Gillis (above) have each remained musically active over the past five years. Girl Talk dropped a solid collaboration with Freeway in 2014 and Luda recently dropped his first album in five years. Will they play the hits though? Rest assured, with a pairing like this, the focus will fall squarely on crowd pleasers. $40-$1,020, 7:30pm Fri (rescheduled from May 23), Whitewater Amphitheater, 11860 FM 306, New Braunfels, whitewaterrocks.com. — JC

The human experience, and thus its expression in art, is as endless and diverse as the natural world. The most powerful and primordial aspect of the human experience is one that ties us most inextricably to the natural world: sex. Throughout the millennia, artists have continually dealt with sexuality in their work, with a variety of aims. Some works of art are essentially moral and convey a pointed social message about sex. Some works celebrate the human form and its perfection. Some works seek to link sex to love or to high religious ideals. Some works carry an important message and some are mere expressions of personal fantasy or are only intended as pure exercises in form. The erotic/pornographic works of local artist Daphid, which will be exhibited for the first time in a single collection on Friday at K23 Gallery, fall in the category of fantastical exercises. Daphid (pictured) is a 33-year-old San Antonio native who has been a working artist for the past eight years. But, he told the San Antonio Current over the phone last week, he only began trying his hand at erotic art about a year ago. Much of Daphid’s other work deals with celebrity and popular culture, using stark black lines and vivid, messily-applied watercolors to recreate iconic movie scenes and to lend a wobbly, lysergic effect to celebrity portraits. His work is edgy and vibrant and tends to celebrate cult classics and grotesque figures that elicit a twinge of shock and pity as much as reverence. Free (18 and up only), 7pm Fri, K23 Gallery, 702 Fredericksburg Rd., (210) 776-5635, facebook.com/k23gallery.
— James Courtney

David Mamet tackles race and the self-consciousness that surrounds it in this gritty drama following three attorneys called upon to defend a high-profile white client charged with the rape of an African-American woman. Peppered with “Mamet speak” (the cynical, edgy, overlapping style for which the playwright is famous), Race raises a number of issues — guilt and shame among them — that critic Ben Brantley suggested “should offer ample nutrition for many a post-theater dinner conversation.” So call it a date night and leave the kids at home. Morgan Clyde directs at the Rose. $10-$12, 8:30pm Fri-Sat, The Rose Theatre, 11838 Wurzbach Rd., (210) 360-0004, therosetheatreco.com. — Murphi Cook

Wipe the slate clean of everything you’ve ever heard or read about Carlos Mencia. At least that’s what the once despised comedian hopes audiences will do as he sets his sights on redeeming his name after years of vitriol aimed at him by the industry he’s inhabited for the last two decades. It won’t be an easy task, but Mencia, 47, isn’t about to quit the funny stuff now. In advance of his appearances at Laugh Out Loud this weekend, Mencia spoke to the San Antonio Current about his new lease on life. Click here to read the Q&A. $25, 8pm & 10:15pm Fri, 7pm, 9:15pm & 11:30pm Sat, 7pm Sun, Laugh Out Loud Comedy Club, 618 NW Loop 410, (210) 541-8805, lolsanantonio.com. — Kiko Martínez 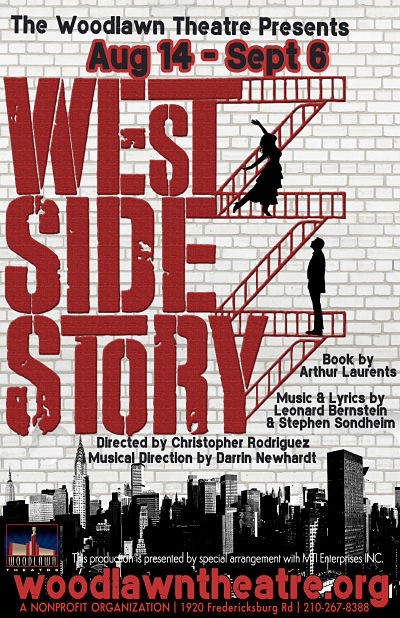 The Jets and the Sharks take the stage in this timeless Sondheim and Bernstein musical about forbidden love. Inspired by Shakespeare’s Romeo & Juliet, West Side Story tells the tragic story of Maria and Tony, two teens from enemy gangs in 1950s-era Manhattan. Early drafts of the script explored a conflict between families (one Irish Catholic, one Jewish) on the Lower East Side; amid rising gang violence, the creators set the play on the Upper West Side to focus on turf wars between Puerto Ricans and whites. Christopher Rodriguez directs the Woodlawn’s production. $17-$26, 7:30pm Fri-Sat, 3pm Sun, Woodlawn Theatre, 1920 Fredericksburg Rd., (210) 267-8388, woodlawntheatre.org. — MC