Fans of the scrumdiddlyumptious cult classic Willy Wonka & The Chocolate Factory can thank Madeline Stuart — an LA-based interior designer who, at 10, convinced her filmmaker father to adapt Roald Dahl’s 1964 masterpiece. Revered for his work on serious documentaries — including Four Days in November and The Rise and Fall of the Third Reich — Mel Stuart (1928-2012) rose to his daughter’s challenge by bringing Dahl’s deliciously dark tale of eccentric confectioner Willy Wonka (Gene Wilder) and his heir apparent Charlie Bucket (Peter Ostrum) to life on screen complete with insufferable brats, orange-faced Oompa Loompas, Everlasting Gobstoppers and a lifetime supply of chocolate. Shot in Munich in 1970, Willy Wonka earned an Oscar nomination for its schizophrenic score, which progresses from the innocent joy of “Pure Imagination” to the haunting anxiety of “The Rowing Song.” Main Plaza Conservancy closes out its pedal-powered Cycle-In Cinema series with an outdoor screening of the film that candy-coats some of the more sinister moments in the G-rated genre. Free, 9pm Thu, Main Plaza, 115 N. Main Ave., (210) 225-9800, mainplaza.org. — Bryan Rindfuss

Belgian filmmaking brothers Pierre and Luc Dardenne produce painstakingly natural, intimate character studies in carefully observed milieus —without a wasted moment. The hero of their intense focus in The Kid with a Bike, a Grand Prize winner at Cannes, is an angry, sullen boy, red of shirt and hair. He bites. His desperate, hopeless love for the father who doesn’t want him leads to painful scenes. Newcomer Thomas Doret holds his own against pros Cécile de France and Jérémie Renier in a simple yet deep coming-of-age tale that bursts into moments of Beethoven lyricism. Free, 6:30pm Thu, McNay Art Museum, 6000 N. New Braunfels Ave., (210) 824-5368, mcnayart.org. — Michael Barrett

Neo-traditionalist, country and western artist Junior Brown is a bona fide Americana generalist. A devotee of what can best be described as honky-tonk boogie, Brown plays his own mutant version of the double neck guitar with such alacrity and deadpan sincerity that he almost makes it not look ridiculous. The Texas country transplant, always an exuberant performer, has been making his own defiantly quirky way in music since the early ’80s and he’s found a cult following among would-be country fans who find themselves distressed with the lack of imagination and spice in the genre’s evolution. $20, 7pm Fri, Paper Tiger, 2410 N. St. Mary’s St., papertiger.queueapp.com. — James Courtney

Nearly every Friday for the past nine years, Henry Roland — as Henry + The Invisibles — has taken over Rebar and performed a multi-instrumental loopfest of a solo show. Over the course of roughly 500 shows, Henry has plied and perfected his zany and unflinchingly optimistic brand of space-funk in front of multitudes of boozy San Antonians. And, speaking from one or two many hazy personal experiences, it’s hard to imagine that there was even a single show that Henry didn’t slay. Friday, he wraps up his residency to focus on recording and touring nationally. Won’t you come get down one last time? Free, 10pm Fri, Rebar, 8134 Broadway, (210) 320-4091, rebarsatx.com. — JC

Experimental filmmaker Kenneth Anger's 1959 got-to-be-read-to-be-believed secret-spiller Hollywood Babylon exposes the dark heart of moral corruption at the center of Hollywood's much-romanticized “Golden Age,” gleefully detailing the gristle to let the rubberneckers take a good long leer. Outsider filmmaker-cum-”Smodcaster” Kevin Smith's podcast/web series Hollywood Babble-On, on the other hand, won't tell you much more than you already know about the lives of the rich and famous. It's just Smith riffing on the Hollywood headlines with co-host Ralph Garman, something like watching Entertainment Tonight in Smith's danky den, a much more inviting proposition for anyone who'd rather watch Mallrats than Lucifer Rising. $44.50, 9pm Sat, Charline McCombs Empire Theatre, 226 N. St. Mary’s, (210) 226-3333, majesticempire.com. — Jeremy Martin

The Art of War festival is something of a March Madness-style breakdance competition, with movers and shakers ascending up the bracket for the glory of a cash prize. Presented by the Urban Dance Educational Foundation, the gig champions b-boy culture — the arms-crossed, downrocking dance artists of hip-hop. At midnight, Art of War shifts gears with a Chessboxin’ seminar from Wu-Tang MVP Ghostface Killah. Since the pre-36 Chambers era of Staten Island Timbs and a Jason mask, Ghostface has been known for storytelling, a brash delivery and some of the cleanest bars of the Wu-Tang Clan. In February, Ghostface released Sour Soul, his most gripping work in some time. A collab with Canadian jazz/instrumental hip-hop trio Badbadnotgood, Sour Soul realizes Wu-Tang’s throwback soul textures with a nimble live band. $20-$25, 2pm-2am Sat, Josabi’s, 17200 TX 16, Helotes, (210) 372-9100, flavorus.com.
— Matt Stieb 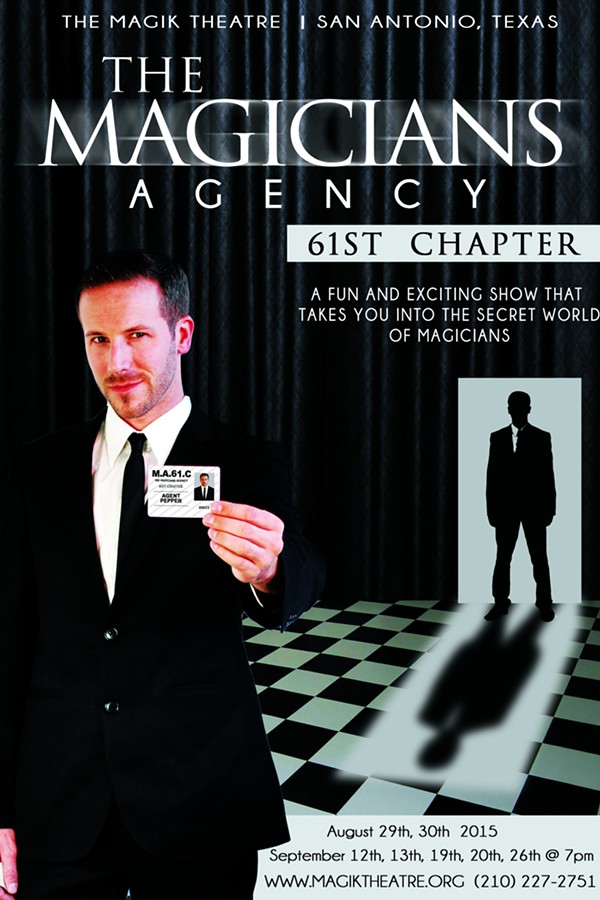 It’s not often that a gift inspires a career — yet that’s the case with UK native Scott Pepper, who received a magic set for his ninth birthday and started landing gigs in his teens. Over the past two decades, Pepper’s fine-tuned his signature blend of magic, illusions and comedy in venues across Europe and aboard many a Disney Cruise Line. The touring entertainer’s latest combines sleight of hand tricks, daring escapes and audience participation in a kid-friendly spectacle surrounding a secret society of magicians who use their skills “to take on dangerous missions and make the world a safer place.” $10-$15, 7pm Sat-Sun, Magik Theatre, 420 S. Alamo St., (210) 227-2751, magiktheatre.org. — BR

Back in the pre-grunge era, vintage finds could be scoured from the racks and shelves of almost any thrift store. With that treasure hunt sadly over, vintage retailers are the only hope for the fashionably nostalgic. Inspired by Austin’s sprawling City-Wide Garage Sale, San Antonio Vintage Expo aims to please retro enthusiasts with 100-plus dealer spaces packed with clothing, toys, records, glassware and high-end estate items. According to organizer Cameron Schleusner, a second event is planned for March. $5, 10am-5pm Sat, 11am-5pm Sun, Austin Highway Event Center, 1948 Austin Hwy., (210) 464-1764, sanantoniovintageexpo.com. — BR

In the field of sleep study, the idea of “creative insomnia” is a controversial one. Can working through the wee small ones provide an inspired spark that can’t be achieved through ordinary means? Each year, it’s a question that the 48 Hour Film Project looks to answer. Across the country, filmmakers get one sleepless weekend to write, shoot, edit and score a short film. If you didn't drudge through each of SA’s caffeine-fueled projects Wednesday at the Bijou, a best of screening occurs Sunday at the Rialto. $10, 7pm Sun, Santikos Rialto, 2938 NE Interstate Loop 410, 48hourfilm.com. — MS