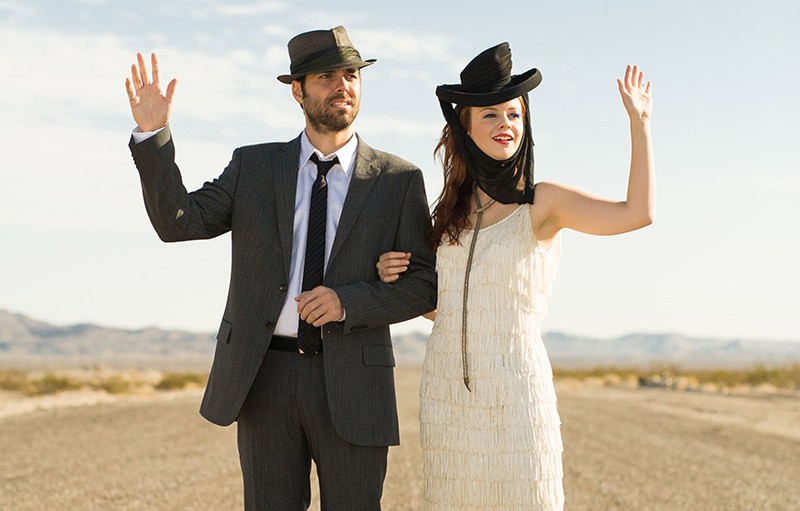 “When she was reading one of her romantic pieces, it was like lasers were shooting out of her buns, aimed right at the audience.” Poet Derrick Brown so describes the stage presence of his longtime friend and collaborator, actress Amber Tamblyn.

Brown swears the two have never kissed on the mouth.

Lazers of Sexcellence 5.0, an obvious nod to the poetic prowess of Tamblyn (and her buns), will be the duo’s fifth poetry tour of its kind since 2006, but this one is a little different — it will be a motorcycle tour, I kid you not. Yes, to bring the power of the spoken word to us lovers of lyricism, the two traveling poets will brave the heat, bugs, traffic standstills, and maybe-but-probably-not rain of three great states: Texas, Oklahoma, and the state of Dallas, according to Brown.

On September 14, Brown and Tamblyn will park their hog at TacoLand to read from their latest books, Our Poison Horse and Dark Sparkler respectively. If perhaps you are reading this and wondering, “Why is the girl from The Sisterhood of the Traveling Pants going to be on a motorcycle reading her poems?” and “That sounds silly,” Tamblyn wishes to assure you it will be one of the “funnest nights of your life.”

Think of it less like a poetry performance and more like a small rock show, she says.

Brown (former weatherman, gondolier, and paratrooper, oh my!) is no stranger to the life of a traveling poet, having participated in poetry tours since 1996. His poetry collections, published by his own house Write Bloody, can be described as gritty, weepy, and oftentimes really, genuinely funny. Brown’s latest, Our Poison Horse, is no exception to this rule as its pieces run the gamut of emotions. Brown compares the poems of his book to songs placed strategically in order on an album – “a funny piece, a silly piece, a story-based piece, an image-based piece.” Each emotional experience is punctuated by another different albeit transitional work.

Brown and Tamblyn both believe that a poetry show is nothing if it isn’t engaging. The show fails if it isn’t pulling the audience along and making them feel something. In much the same way that the poets on the back of their motorcycle are left vulnerable to and fully aware of the road, the city, and the weather, their audience too must experience a heightened sense of emotion, of place and of their surroundings during a show.

The poetry compiled in Brown’s Our Poison Horse was written with a specific sense of place in mind: the Texas landscape. The title of the work alludes to a horse Brown witnessed in the country. It had been doused with pesticide by some kids, and its skin was peeling off. Through his experience with this horse, befriending the animal and encouraging it to trust humans again, a theme of rebirth and renewal cropped up in Brown’s works. Even after being “rocked by tragedy,” Brown believes one can start over and thrive.

Tamblyn’s poetry, on the other hand, does not carry such an uplifting undertone but is a dark and necessary read/listen nonetheless.

Tamblyn, perhaps best known for her role as the most (easily) dynamic character in the teen-girl flick, The Sisterhood of the Traveling Pants, has been writing for years. Having grown up around poets, writing has been a huge part of Tamblyn’s life since childhood, and she admits to creating her own chapbooks of original work since the age of eleven. Her latest book, Dark Sparkler, is her third published collection of poetry. It contains over 30 poems about the harsh realities of movie starletdom and the unfortunate commodification of young women in Hollywood.

Dark Sparkler is a personal collection of works for Tamblyn who has been acting and thus “ostensibly been an object” since she was eleven years old. While growing up in the appearance-driven movie industry, over the years Tamblyn has become increasingly fascinated with the lives and deaths of actresses who never lived far beyond her current age. In her latest work, Tamblyn uncovers the lives of these women and examines her own similarities and differences with them.

The poetry of  Dark Sparkler deals with body dysmorphic disorder, with stalkers, suicide, and murder. It is a lamentation for those young women who have fallen victim to the pressure to adhere to unrealistic standards in their painfully public lives. Of her book, Tamblyn says, “I don’t think I made any effort to write a feminist work, but I consider it to be [feminist] and I’m proud of that.”

But make sure you stay for the dancing.