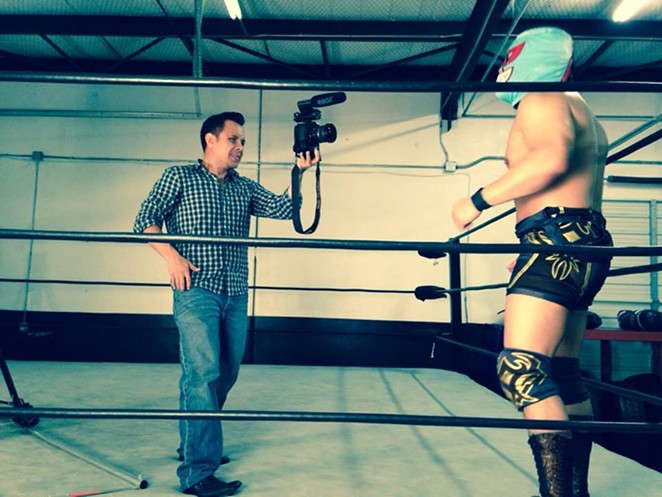 After being laid off from his job as editor of the San Antonio Express-News-owned community newspaper the Southside Reporter in September 2013, Noi Mahoney thought it might be as good of a time as any to switch gears and head down a different career path. While journalism had always been an important part of his life, making movies was a he never had enough time to pursue.

With some of the money he received in his severance package, Mahoney, a 1993 Holmes High School graduate, made some upgrades to the filmmaking equipment he had used in the past to complete five short films. He knew he’d have to start fresh to finish his first feature.

Two years later, Mahoney’s dream has finally come to fruition. On Saturday, October 17 at , he will screen his first full-length film, a feature documentary called Austin vs. San Antonio. Through interviews with a variety of San Antonians and Austinites, Mahoney explores the cultures of the two major cities and hears from residents about what they think about their I-35 neighbors.

During an interview with the Current earlier this week, Mahoney, 41, discussed what led him to make a film about the two Texas cities, how he was able to stay unbiased to his hometown, and what concerns San Antonians have in the future growth of the downtown area.

Full disclosure: as a freelance writer in San Antonio, I have worked with Mahoney in the past on stories published in the Southside Reporter.
Talk about why you decided to make your first feature film a documentary on San Antonio and Austin. Where did the idea come from?
I grew up in San Antonio and then attended the University of Texas at Austin and graduated from there. I lived in Austin for a few years. I was always struck by how different the two cities are despite being an hour apart. The culture seemed so different to me.

What did you learn about the two cities during the making of this documentary?
I learned that what it means to be a San Antonio resident and what it means to be an Austin resident has changed a lot. San Antonio used to be this sleepy, little community. It doesn’t feel like that anymore. San Antonio has grown up a lot. When I was a college student in Austin in the '90s, it felt like San Antonio does now. It was a sleepy college town. Slowly but surely, businesses started moving to downtown Austin. Now, it’s this sort of mini metropolis.

So, what is the structure of the documentary? How do you set this “rivalry” up?
I interviewed about 30-35 people from Austin and San Antonio – about half and half. There is a little introduction about why the two cities are so different. Chapter 1 of the movie is about San Antonio, so I talk to people from here about what it means to be a San Antonio resident. Chapter 2 is about Austin and I talk to residents in Austin about their impressions of the city. I also asked people in both cities what they think of the other city. I asked them questions like, “How would you describe Austin’s relationship with San Antonio?”

What was the consensus from both sides?
It varied, but one of the things I seemed to find was that people in San Antonio have this notion that people in Austin look down on them or don’t like them, which I didn’t find to be the case at all. I found a lot of people in Austin really like San Antonio. They do their mini vacations here. Whatever rivalry must have existed in previous generations seems to be slowly melting away. We have more in common now more than we ever did before.
Were there any concerns from San Antonians that we were going to become as crowded as Austin?
When I talked to people here, some of the big concerns were how fast downtown San Antonio was growing and what the city was going to look like in 20 years. Those were similar concerns in Austin, except the growth there has been much more explosive. Real estate prices are skyrocketing in Austin. Traffic is bad. People in San Antonio want to grow, but they don’t want to grow into what Austin has become.

Some people might wonder because of the title of the film if you’re trying to pit the two cities against each other in some way. Is that what you were going for?
Yeah, a little bit. I thought [the title] rolled off the tongue. When I tell people about the movie, they always ask me, “Well, which city wins?” But it’s not about who wins. It’s more about finding the community where you feel most comfortable. It’s not about what city is better. It’s about finding where you belong.

You’ve lived in both cities but call San Antonio home right now. As a documentary filmmaker, were you able to stay unbiased?
(Laughs) You know, I’ve actually spent more of my adult life in Austin than in San Antonio. I think that gave me a unique perspective. I’m sure there are a lot of people from San Antonio who go to UT-Austin and have feelings for both cities. I don’t think my movie is biased, but maybe someone will think it is one way or the other.

What do you hope people learn from your documentary?
What we have with San Antonio and Austin is situation that you don’t have anywhere else in the United States. You have two major American cities so close together – about 80 miles apart or less. They are so unique in their cultural identity. I think it’s very cool that we have these two cities that we can have fun in and enjoy what’s best in both of them. I would like people to take that away from the film. What we have with San Antonio and Austin is very special.
Screening: Austin vs. San Antonio
Free, , Say Sí, 1518 S. Alamo St., facebook.com