The Many Ways to Celebrate Halloween This October (Part 1)

by Albert Salazar and James McCandless

Let's face it. Halloween isn't a one-night affair anymore. The Halloween season creeps up on us earlier every year, and October is jam-packed with events and festivities tied to the holiday. Here's a look at some of the ways you can conjure your Halloween spirit, plus a preview of some of the ways San Antonio plans to celebrate Día de Muertos this year.

Waiting in a seemingly interminable line to get the crap scared out of you at a haunted house is Halloween tradition. Every year you tell yourself that these annual haunted houses that crop up are so very, very fake, but inevitably your time among the slow-moving horde waiting to get inside is spent building up the unimaginable terrors lurking just around the corner of those confusing, dark passages. Local masochists have plenty of options. 13th Floor, SA's largest haunted house, is luring in victims visitors  two themed attractions to fill-up on nightmare fuel. There's burial ground, a hotel basement turned tomb, and The Void, which, we don't even want to know.

13th Floor may be the most popular local haunted house attraction, but it's not the only one. Options include Psycho Asylum/Slaughter House, , and Terror Mansion, which claims to be a haunted house that's actually haunted. If you're looking for some homemade horror, there's Terrors Haunted House, otherwise known as the residence of Halloween enthusiast Mike Valdez. And, of course, there's Ripley's Haunted Adventure for a more family-friendly fright.

Looking for something different? Try Great Room Escape. Get locked a room with 11 other participants and either flesh-eating zombie or a deranged serial killer, depending on the theme. Together you must decipher hidden clues riddles in order to unlock your freedom. And you only have an hour to do it. The immersive experience is extra-terrifying for anyone who is scared of interacting with people.

Six Flags Fiesta Texas and SeaWorld San Antonio have undergone their annual Halloween transformations, offering a number of special haunted attractions in addition to the usual coasters and thrill rides that bring people out to the park. If the admission price doesn't scare you off — full price tickets for a family of four at Six Flag's FrightFest can set you back around $250 — take the kiddos out for a full day's worth of entertainment. Six Flags has added four new haunted attractions for this year's Fright Fest, including the Chupacabras From Hell scare zone, featuring costumed actors dressed as the legendary goat-suckers. I don't know about you, but the idea of a theme park employee stalking me in a chupacabra get-up sounds even more terrifying than an actual chupacabra. Also new are Slaughterhouse 6, a haunted mansion featuring creepy, murderous farm children, and Nightmares, a maze that forces you to confront your greatest fears. (There is an additional fee for both attractions.)

Over at SeaWorld. there's Unearthed Scarlett's Revenge, a haunted house attraction featuring a terrifying demon who was buried beneath the park and mistakenly unearthed by park maintenance (or so they say). SeaWorld tapped The Blair Witch Project producer Robin Cowie to craft a demented, demonic storyline. The attractions' trailer already has us saying a resounding, "Nope!"

If you're the type to have detailed zombie apocalypse plan in place, don't be alarmed this Sunday when downtown is seemingly overrun with the undead. That flesh-eating horde is very much alive, so no need for the machete. This Sunday is the annual San Antonio Zombie when hundreds of locals rip their clothes and paint on their best zombie face to shuffle through the streets of downtown. But it's not the only zombie-themed event happening this week.
On Tuesday, the San Antonio Tuesday Night Bike Club is hosting a zombie ride at Alamo Beer, benefitting the Texas Diaper Bank. And this weekend is the 4th annual Zombie Con, featuring local authors and artists, zombie memorabilia, plus a zombie costume contest, a brain-eating and a zombie rave. 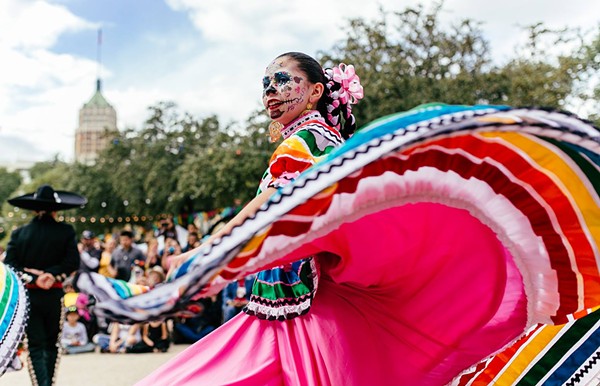 The annual Día de Muertos celebrating brings the holiday early this weekend at La Villita. The two-day festival will feature live music, including Girl in a Coma, performed at the Arneson River Theater, original art from many local artists, a procession, a living altar, and more. This festival boasts the largest open altar exhibition in San Antonio, plus a procession, a zombie bazaar, art vendors and more.. This is only the first of the many Día de Muertos celebrations taking place over the next few weeks. There'sSAY Sí's Muertitos Fest, Dia de Los Perros and more. Here are some of the many Dia De Los Muertos celebrations happening around town.

This is just a small sample of ways you can get your Halloween on this month and beyond. Stay tuned for more events, including family-friendly fare, haunted tours and more.