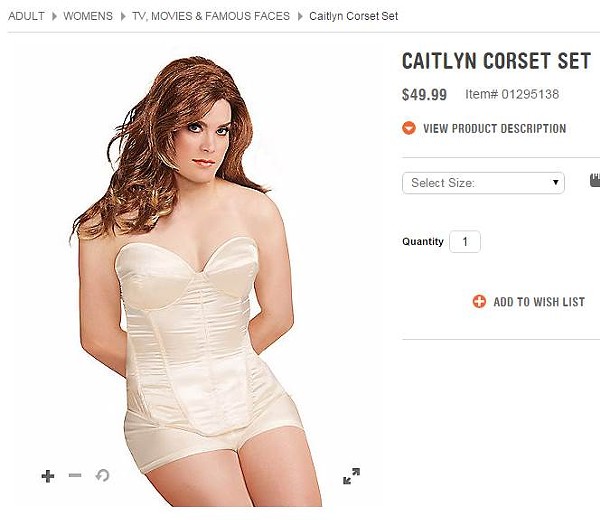 Caitlyn Jenner is the Halloween costume Texas is googling more than another state. Being that Texas isn't exactly the most tolerant state when it comes to LGBT issues — a record number of anti-LGBT legislation was introduced during the last session this year — and given that other popular costume searches in Texas include "Ku Klux Klan" and "Nazi," I am just going to go ahead and say that this is a bad thing. A very, very bad thing.

It should come as no surprise that there is actually a Caitlyn Jenner costume for sale, given new pop culture-inspired costumes crop up every year. The corset and wig costume set, for sale at Spirit Halloween and other online costume retailers, replicates the now iconic Vanity Fair Caitlyn Jenner cover that went instantly viral earlier this year.

It should be noted that Caitlyn Jenner has no issues with the costume, she said during an interview with Today.

"I don’t think it’s offensive at all ... I know the community does. And they’ve gotten a lot of criticism for doing it," she told Matt Lauer. "You've got to enjoy life. Life's too short. I can't get too upset about that type of stuff."

The only issue she has is with the costume's quality. And she's right. That is one raggedy-ass , plastic wig.

Still, the transgender community has valid reasons to decry costume's offensivness, namely that transgender is not a costume; it's a person's identity, and that's not something to joke about. Bustle has a good round-up of reasons of why you shouldn't be Jenner for Halloween, if you are so inclined to tap "Add to Cart."

"There's no way around it and sadly, this type of costume turns a person's identity into a joking matter by allowing people to play act as a transgender individual. It's simply not OK when people's identities and real lives are at stake."


News of Texas Halloween costume searches comes to us by way of Estately, a real estate website that blogs about everything and anything except real estate. The site compiled a map of halloween costumes that are googled in each state more than the others.

So what are other states searching for? The godless and unoriginal heathens over in California are looking for pregnant nun costumes. Tennessee, home of Graceland, is searching for Elvis, obvs. Georgia is searching for Doc McStuffins, which is some sort of Disney cartoon about a young, black nurse who wants to become a doctor. (That's sweet.) Everyone in New York wants to be Donald Trump, and New Jersey is searching for Snookie — still.

Meanwhile the Upper Rocky Mountain States and the Upper North East are dark, evil places where Halloween doesn't even exist.