The Official (and Unofficial) Weird and Avant Garde Music of Luminaria 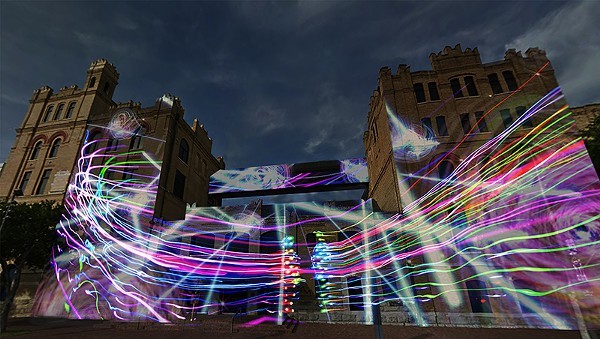 In order to augment our now-NYC-bound former music editor’s engrossing interview with still-NYC-based tape-loop guru William Basinski, we’ve highlighted three other musical events occasioned by Luminaria this weekend. Don’t let the weekend’s frog-drowner forecast put the proverbial damper on your plans to attend. Grip yourself a Sears poncho and find the driest path between the The TenEleven, the San Antonio Museum of Art and the Luminaria music stage to scope a torrent of international avant-garde music. For more details on the pared-down, indoor Luminaria, click here.

The Grasshopper Lies Heavy guitarist (and Current contributor) James Woodard has lined up the best weird-music show since whenever it was that Computer Refrigerator Jesus played last. Organizers are billing it as the Unofficial Luminaria Experimental Music Showcase. Garrett Capps is swapping out his Doug Sahm jones for even further psychonaut outings with his Average Haste project, while Erik Montano and Dane Rousay of The Freebies take a page from the Steve Reich playbook with some contact-mic’d body music. Woodard’s own duo with fellow TGLH guitarist Mario Trejo headline playing their own dreamy iteration of far-out kosmiche peddlers Tangerine Dream; solo psych outing Click opens the evening.

The lineup prominently features several visitors from up I-35, including the loop-loving violinist (and frequent Thor Harris collaborator) Violinda and drone musician Amulets, who operates his live shows out of a suitcase of electronics. He’s collaborating tonight with SA native More Eaze (nee Marcus Rubio), who is in town for a spate of shows himself. The show starts at 7:30 pm and is free.

The Unofficial Luminaria Experimental Music Showcase is a precursor to Stephen O’Malley’s solo show the next night and also at The TenEleven. An American musician and designer now based in Paris, O’Malley operates on the all-caps conceptual principle that MAXIMUM VOLUME YIELDS MAXIMUM RESULTS. Though he is best known for testing the boundaries of permanent hearing loss with his doom drone duo SUNN 0))), O’Malley moves equally well between the realms of extreme metal, visionary jazz, and contemporary composition (this author’s favorite SOMA undertaking is still KTL, his duet with Austrian laptop artist Peter Rehberg, which came together to compose the score for a theater production). O’Malley performs at 9 p.m.

Saturday will also be a homecoming of sorts for the singer Chrysta Bell. A San Antonio native, Bell has spent the last decade living on the West Coast, where she has maintained a fruitful musical collaboration with David Lynch. Bell contributed the song “Polish Poem” to Lynch’s last film, Inland Empire, and has made a string of singles with him since. It’s easy to see how they fell in together — Bell’s chanteuse songbook embodies the surreal mystique and sultry unease, recalling Julee Cruise’s irreplaceable soundtrack to Twin Peaks. Bell performs, rain or shine, at 8:20 on Friday at the covered outdoor stage at the Luminaria headquarters parking at Broadway and Jones.