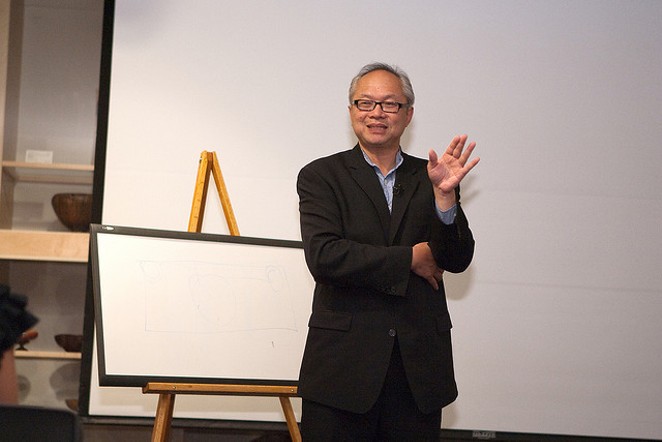 The Mission Reach's third public art portal, this one at Mission San Jose, will be built by Houston native Mel Chin, according to Stuart Johnson of the San Antonio River Foundation.

Chin’s work will join the other two art portals on the Mission Reach: “River Return” at Mission Concepción by Stacy Levy, and the recently completed “Whispers” at Mission San Juan by Belgian artist Arne Quinze. A fourth portal at Mission Espada is also in the works. There is no timeline yet as to when Chin's piece will debut, as plans are still being finalized by the San Antonio River Foundation.

No details have been released concerning what Chin’s piece will look like, but his previous work makes speculation nearly impossible. In a career spanning roughly four decades, Chin has created a vast and diverse catalog of installations, collages, drawings and sculptures. Among other themes, his work deals with political and environmental injustices, surrealism, cultural myths and social norms.

“He is known for the broad range of approaches in his art, including works that require multi-disciplinary, collaborative teamwork and works that conjoin cross-cultural aesthetics with complex ideas,” says the biography on his website.

One of his works, “The Funk & Wag from A to Z,” is a collage installation of black-and-white images clipped from an encyclopedia set and then rearranged and pasted together to form new scenes and ideas. The collages are now available in book form.

He also created “Safehouse,” a New Orleans installation where he put a 10-feet in diameter bank vault door on a home in a neighborhood ravaged by Hurricane Katrina.