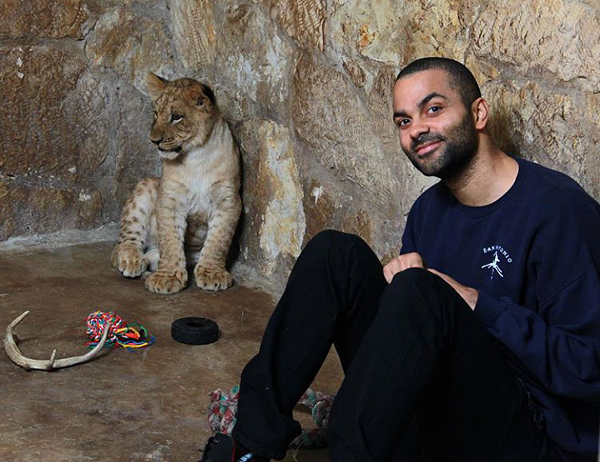 The Tony Parker sacred lion cub naming ceremony/press conference is over. Parker named the cubs TP, Axelle and Josh, after himself, his wife and their son respectively. Now that they are all family, he spent some intimate time with the Parker pride inside their den. There's video of it over at the Spurs website. He didn't re-enact the beginning of The Lion King, but we still say that would've been totally awesome.


Proving once again that his life is so much better than yours, the San Antonio Zoo has granted Tony Parker with near-limitless power by making him a Lion Kingmaker of sorts. He and no one else will bestow names upon the three heretofore nameless lion cubs who have languished without a proper sense of identity since their birth in late July.

Parker will christen the cubs Tuesday morning at a press conference where he will announce to the world the names he's chosen to not only define who these cubs are, but who they forever will be. For now, the cubs patiently await to learn what names to which they will be tied for their lifetime by the man they are now calling "father," ultimately demoting their real father, Tau, to mere "sperm donor."

The zoo awarded Parker with these sacred privileges after he placed the highest bid for the opportunity to name the cubs at their annual Zoobiliation Ball earlier this month, an acknowledgement that true power and influence can only be bought, and you can't afford it.

So what will Parker name these cubs? Anything he god damn pleases. They can all be little Tony Parker, Jr's, if he wants. Or maybe he will reference his French heritage by naming them after the country's classic pastries. Madelaine, Baguette and Beignet? Or maybe he can just name them M, V and P.

Whatever his choice is, we'll find out Tuesday morning.

No word if Parker will re-enact the beginning of The Lion King and ceremoniously raise each cub up the sky with "Circle of Life" blasting in the background, but we're pretty sure the zoo is training its new giraffes how to properly genuflect, just in case. Sure it would be improper, but it would also be awesome.