Along with like-minded acts Madness and The Specials, The English Beat helped define the UK’s Two-Tone movement, a late-1970s ska revival fueled by punk and mod sensibilities. Co-led by vocalists Dave Wakeling and Ranking Roger, the group disbanded just after finding success in the U.S. via danceable hits like “Mirror in the Bathroom” and “Save it for Later.” Although reunited shortly thereafter as General Public, the frontmen now lead their own bands, with California-based Wakeling driving the version that lands in SA this week in support of the crowd-funded album Here We Go Love. $20-$25, 7pm Thu, The Korova, 107 E. Martin St., (210) 226-5070, thekorova.com.
— Bryan Rindfuss

After knocking off the Spurs in the opening round of last season’s playoffs, Chris Paul and the Los Angeles Clippers appeared poised to shake off the their franchise’s longstanding losing stigma. An embarrassing collapse against the Houston Rockets in the Conference Semifinals halted that momentum, followed by the DeAndre Jordan free agency drama with the Dallas Mavericks, which looked bad for everyone involved. As the Golden State Warriors play at a historic pace, and the reloaded Spurs continue gelling earlier than anticipated, the Clippers have somehow become an afterthought in the West. With Jordan and Blake Griffin in the frontcourt and Doc Rivers on the bench, the Clippers remain a formidable foe, but Tony Parker usually delivers against his buddy CP3. $50-$235, 7pm Fri, AT&T Center, One AT&T Center Pkwy., (210) 444-5000, attcenter.com. — M. Solis

“Older than Britney but younger than Madonna,” native Texan Jimmy James (born James Jude Johnson in Laredo) rose to prominence in the 1980s impersonating Marilyn Monroe so flawlessly that his increasingly iconic L.A. Eyeworks ad (shot by celebrity photographer Greg Gorman) has erroneously inspired everything from tattoos and iPad cases to postage stamps in the Central African Republic. Since retiring his Marilyn act in the 1990s, James has proven his chops as a recording artist (exemplified by the Billboard-charting 2006 club hit “Fashionista”), vocal impressionist (channeling everyone from Billie Holiday and Barbra Streisand to Elvis and Eartha Kitt) and comedic storyteller. Hosted by local stand-up Joan Riviera, the Los Angeles-based entertainer’s Christmas homecoming show promises a “festive sprinkling of holiday songs,” including “Blue Christmas” (as Cher), “Have Yourself a Merry Little Christmas” (as Judy Garland) and “Feliz Navidad” (as Bette Davis). $15, 8pm Fri, SA Country Saloon, 10127 Coachlight St., brownpapertickets.com. — BR

While FL!GHT residents André Stitt and James Cobb’s collaborative installation “14 Secret Masters of the Universe” remains on display through January 1, the gallery also has some exciting pop-ups in the works. One of these shows, opening Saturday and on view through December 26, is San Antonio artist Kelsi Sharp’s “Tap to View,” an exhibit comprised entirely of Snapchat screen grabs. Through a series of interesting juxtapositions, Sharp playfully reminds us that, despite Snapchat’s claims regarding the ephemeral nature of content on its servers, nothing is ever really deleted in the digital age. Free, 6-10pm Sat, FL!GHT Gallery, 134 Blue Star, (210) 872-2586, facebook.com. — James Courtney 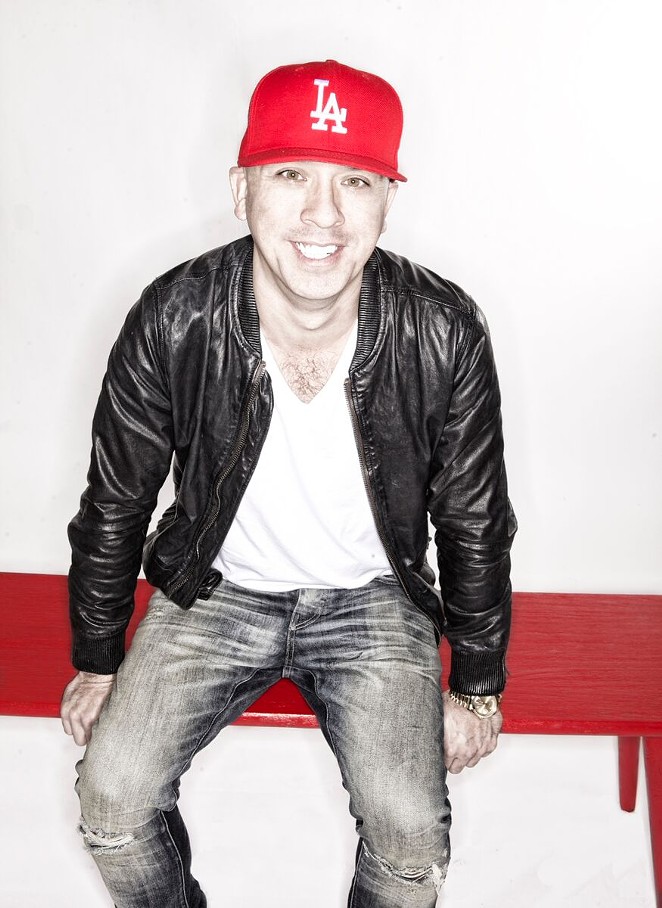 Many comics imitate their immigrant mothers onstage. But when Chelsea Lately alum Jo Koy tells a story about his Filipino mom playing Wii or mocking him for losing his car keys, not only is the attention to detail closer to a short story than a caricature, but he, not his mother, becomes the ultimate butt of the joke. When he describes picking his girlfriend up from the bar, the physical imitation of her peeing in public transitions into a dissection of sexual politics that’s more likely to leave men squirming uncomfortably. $22.50-$42.50, 8pm & 10:15pm Fri-Sat, 7pm Sun, Laugh Out Loud Comedy Club, 618 NW Loop 410, (210) 541-8805, lolsanantonio.com.
— Jeremy Martin

Spurs forward Boris Diaw is a bit of a Renaissance Man. In addition to dropping dimes and dunks on the court, Diaw’s also a photographer, a wine enthusiast and now an author. On Saturday, meet Diaw during a book signing for Hoops to Hippos!: True Stories of a Basketball Star on Safari at Barnes & Noble at the Shops at La Cantera. Part of a series for children published by National Geographic, the book is full of photos and stories from Diaw’s adventures in Africa. Free with purchase of Hoops to Hippos! (reserve a spot in line as early as 6pm Wed, Dec. 16), 4pm Sat, Barnes & Noble, 15900 La Cantera Pkwy., (210) 558-2078, barnesandnoble.com. — Michael Marks

Leave it to Travis Park (with its 250,000 twinkling lights) and Centro San Antonio to host a holiday party that’ll be hard to top. Toss on your ugliest sweater and tightest yellow tights for a screening of Jon Favreau’s 2003 classic starring Will Ferrell as Buddy the Elf as he makes his way from the North Pole to the Big Apple in search of his dad. Bring a blanket and pick up jingle bells and a scratch ‘n’ sniff card (for a smell-along) at the event. Did we mention the snowball fight and pre-show sing-along hosted by Alamo Drafthouse? Just make sure not to land on the naughty list. Free, 6pm Sat, Travis Park, 301 E. Travis St., (210) 225-3862, downtownsanantonio.org.
— Jessica Elizarraras

My memories of Houston’s “most hated” band are pretty fuckin’ hazy. Having played several shows with them almost a decade ago at the now-defunct 180 Grams and a dive in H-Town called the White Swan, I remember lots of boxer shorts (and only boxer shorts), bodily fluids, terrible alcohol and a drummer named Zlatan who swung wildly — dismantling his kit in the process — connecting with the audience more often than his cymbals. The rickety construction of their music worms into your head holes like the burn of a skateboard wipeout on molten Texas asphalt, or a flag bonfire with lighter fluid functioning as the incendiary provocateur and beverage of choice. As a spectator, making it through a show was as much a treat of punk carnage as it was a source of pride, most people taking several looks at the band and the rugby scrum of their set and turning tail. If feedback was a viable nutrient, to witness a Cop Warmth show would be like gorging on the dingiest blister buffet; stuffed to the gills on white noise and razor-burned distortion. Gosh, I hope they remember me. With Body Pressure and Colonia. $5, 8pm Sat, Paper Tiger, 2410 N. St. Mary’s St., papertigersa.com. — D.T. Buffkin

Spanish architect Antonio Gaudí was an unparalleled genius in his field. As something of an early magical realist, his work inspires the feeling of the fantastical sublime in its viewers like perhaps no other architect’s body of work. Born in 1852, his designs are closely associated, like his Spanish contemporary Joan Miró, with the modernist movement in art. Gaudí, however, was inspired as much by the sweeping drama of religion and the organic, imperfect perfections of nature, as he was by the clean and severe lines of modernism. In this 1984 film by Japanese avant-gardist Hiroshi Teshigahara, Gaudí’s work is showcased in full, including his still incomplete masterwork, the Sagrada Familia church in Barcelona, and the viewer is left to build their own philosophies around the genius that confronts them. Part of the McNay’s Miró-inspired This Is Not a Film Series, Antonio Gaudí is a visionary depiction of an artist who was content to let his fantasies guide his artistic choice rather than merely following the mode of the moment. Just as Miró’s abstraction beguiles critics still, Gaudí’s defiance of realistic and purely functional forms serves as a reminder of how the creative individual can reinvent the very space of life itself. $15-$20, 2pm Sun, McNay Art Museum, 6000 N. New Braunfels Ave., (210) 824-5368, mcnayart.org.
— James Courtney