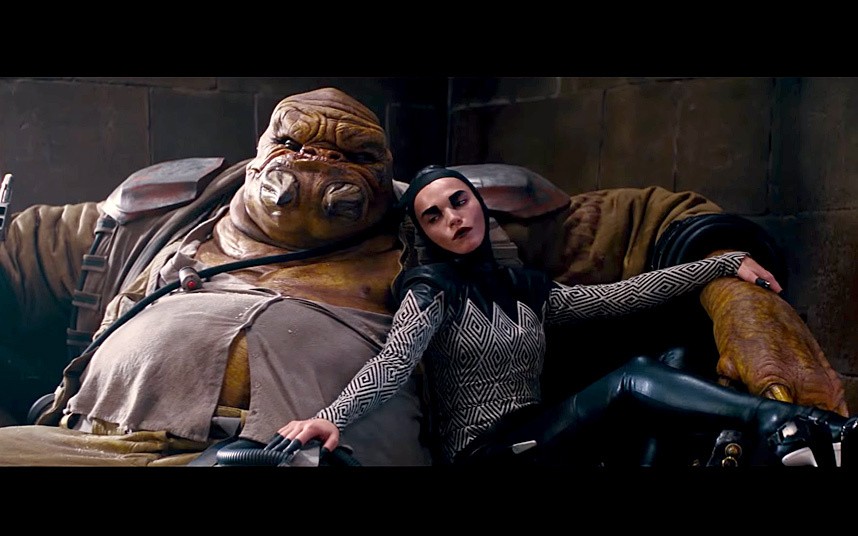 The movie event of the decade is here, and, no, it does not live up to the hype. Though it’s an enjoyable, thrilling adventure and worlds better than The Phantom Menace and Attack of the Clones, it exists in a cinematic galaxy far, far away from the original trilogy.

If you don’t know the basic story, you’ve obviously been living in a Dagobah swamp for the last half-century. But the only things you really need to know going in are that it is roughly 30 years after the events of The Return of the Jedi, the Empire (now with a creepy, fascist-sounding new name) has made an unexplained resurgence, and Luke Skywalker has disappeared.

Harrison Ford, Mark Hamill and Carrie Fisher return, as do Anthony Daniels as C-3PO and Peter Mayhew as Chewbacca, and they are complemented by some nice new additions. Nevertheless, the acting is mediocre. Ford is the real star and handles that responsibility well. However, Fisher is invisible and Hamill gets virtually no screen time, though the latter’s entrance is suitably grand. Oscar Isaac is solid but has disappointingly little to do, Max von Sydow is in just one scene, and John Boyega as a Stormtrooper deserter is just OK. Even worse, Domhnall Gleeson and Adam Driver are badly miscast and their characters poorly conceived. Among the newbies, only Daisy Ridley (as Rey) is stellar, so I guess it’s good that she will likely be the face of the franchise moving forward.

“I can’t explain, and you wouldn’t believe it,” she replies when asked how she escaped an attack on her home planet. That’s a fitting answer to just about everything else in this film, too. Though the first hour feels paced and plotted perfectly, with the traditional special effects, wipe shots and John Williams’ familiar score reminiscent of the 1970s. But the rest is a mess of writing and editing, as if director and co-writer J.J. Abrams were trying to cram in everything but the cantina sink in an effort to re-create the glory of the original films and satisfy his audience’s thirst for thrills. He also makes the odd suggestion that the Force is purely genetic, something that doesn’t need to be learned and understood, and that a lightsaber can be wielded successfully by anyone. Still, some of the effects are impressive, and there are a couple of genuine lump-in-your-throat moments. However, those emotions are due mostly to nostalgia, not anything Abrams has created.

We should still thank him for the attempt. Maybe the first trilogy existed in a time and place that can never be truly recaptured. If one can never go home, it follows that one can never go back to a movie theater, at last never back to one that existed three decades ago. But that won't stop Disney from trying, as the company has a lot riding on this. So my advice for the next film would be to relax. Let go and let the Force flow through you. Don’t overwhelm us with action and rehashed plot lines. Instead, focus on what worked for George Lucas: story, human interaction and originality.

But let’s be honest: Most fans don’t care what critics say. This film is mostly review-proof. This means that the most interesting debate is not how good it is but how much money it will make at the box office.

It will certainly top Avatar’s domestic gross of $760 million and should be the first film to top $1 billion in the United States. However, it will likely not reach Gone With the Wind’s adjusted-for-inflation gross of around $1.7 billion or even the original Star Wars’ total of $1.49 billion. Though today’s U.S. population is almost three times what it was in 1939 and 100 million more than it was in 1977, non-theatrical viewing (Blu-ray and the Internet) will make it tough for any movie to ever reach GWTW’s exalted total. Films simply don’t play in cinemas long enough anymore. (Indeed, GWTW earned more money in its re-releases than it did during its original roadshow and general release.)

The international scene is another story. The world’s population is more than three times what it was in 1939, and the overseas market now dwarfs anything that 1930s, or even 1970s, moviemakers could have expected. That explains why Avatar holds the No. 2 international adjusted-for-inflation record, at $3 billion, while the original Star Wars now sits at No. 3. However, GWTW still clings to the top spot overseas, too, with an adjusted gross of more than $3.4 billion (as much as $3.7 billion by some estimates). So the real drama will be whether The Force Awakens can reach those stratospheric heights. Yes, the Force may be with it, but the Wind still blows strong.

The money questions will be settled soon enough. For now, keep your expectations low and get ready for a romp. Although it doesn’t possess the originality and seamless magic of the first trilogy, The Force Awakens contains enough humor, emotion and visual excitement to satisfy fans.