Staying in This New Year's Eve? Here's Some New Year's-Themed Netflix Picks to Help Ring in 2016 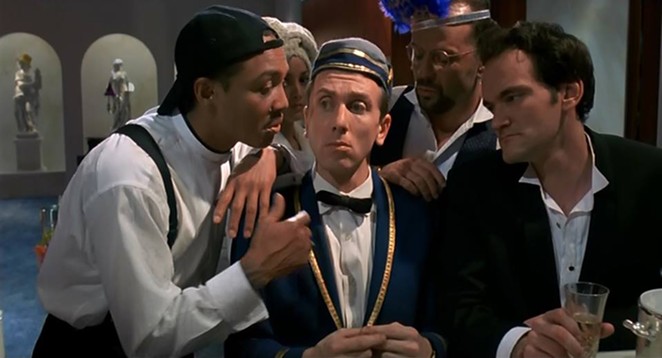 If the idea of popping corks and hard-to-see-out-of-2016-shaped-glasses makes you want to curl up into a human comforter-burrito, just flip on one of these New Year's-themed gems and avoid the Champagne headache altogether.

Four Rooms (1995) – An anthology comprised of four short films by a cadre of independent directors who met each other at the Sundance Film Festival in ’92 and ’93 (Tarantino, Rodriguez, Rockwell, and Anders) before the festival was dominated by established, mainstream Hollywood talent. The stories in Four Rooms revolve around a bumbling bellboy (Tim Roth) who, on New Year’s Eve, encounters a coven of witches, a scarily paranoid husband, two kids from Hell, and gamblers with a penchant for removing fingers with a hatchet. The punch-packing zaniness portrayed within these four Roald Dahl-inspired stories embodies the anything-can-happen aura of anxious anticipation held by many New Year’s celebrators across the globe.  Often overlooked in Tarantino’s body of work, this film deserves a first or second look from those who appreciate original storytelling and the spirit of
directorial camaraderie.


Seeking a Friend for the End of the World (2012) – If you are like me, the New Year’s countdown to the end of the year always feels like the end of the world as I have known it for the last 365 days. In many ways, once the countdown to midnight reaches zero, I often wonder if a new day will indeed rise once I close my eyes for the final night of the year. Seeking a Friend incorporates the holiday’s doomsday paranoia by documenting Steve Carell and Keira Knightley’s final days on Earth due to an asteroid rocketing its way towards the planet’s surface.

This film is particularly notable as it showcases Carell’s transition from broad comedy (The Office, Get Smart, Date Night) to Oscar-nominated drama (Foxcatcher). The plot isn’t entirely original; it is eerily reminiscent of Don McKellar’s end of the world dark comedy, Last Night (1998). However, what elevates Seeking a Friend from Last Night is the past and future Oscar nominated power that both Knightley and Carell bring to the proverbial plate.

Balancing upon a fine line of comedy and dramatic emotion, this apocalyptic romance offers up the question: With whom would you choose to spend your last hours on this planet? Would it be a friend, a lover, a family member, or maybe all those things combined? Regardless of your hypothetical decision, make sure to tell whomever you spend New Year’s Eve with how much they mean to you; you never know when your lives will end.

By embracing her vulnerabilities, Zellweger nabbed her first best actress Oscar nomination for her portrayal of a happy-go-lucky woman trying her hardest to abide by her New Year’s resolutions, which happen to include deciding between two seemingly perfect male specimens (Hugh Grant and Colin Firth). At the end of the flick, Bridget finally finds a man who “likes her just as she is.” Chances are your rom-com loving partner already owns this movie on DVD.  Chances are they’ve tried to force you to watch it on a lazy night in. There’s a slight chance you may have “misplaced” said DVD in a nearby dumpster. This New Year’s Day, take one for the team and let your lover know that Bridget Jones is currently streaming on Netflix.

The Increasingly Poor Decisions of Todd Margaret (2009 – Present) – New Year’s is a time to revel with family and friends. It’s also a time in which many poor decisions are made.  Maybe you drank too much. Maybe the person you woke up next to looks more like Ron Jeremy than Brad Pitt in the cold, hard light of day. Whatever poor decisions you make this New Year’s, take comfort in the fact that there is someone who has made even worse decisions than you.

In IFC’s television series, The Increasingly Poor Decisions of Todd Margaret, David Cross (Mr. Show and Arrested Development) portrays a bumbling, low-level office employee who is erroneously promoted to the London corporate office in order to oversee the sale of Thunder Muscle, a new energy drink. The problem is: Nobody has heard of Thunder Muscle, nobody seems to work at the Thunder Muscle office, and most importantly, Brits don’t enjoy drinking energy drinks of any variety, no matter how much Margaret’s boss (Will Arnett) is convinced that they do. The series brims with Cross’ offbeat comedic sensibility. I urge you to watch this little-seen show simply to find out how our anti-hero ends up being charged with “funding a terrorist organization, possession of biological weapons, and the possession of child pornography with the intent to distribute.” After a lengthy hiatus, Margaret will premiere its third season on IFC in January 2016.