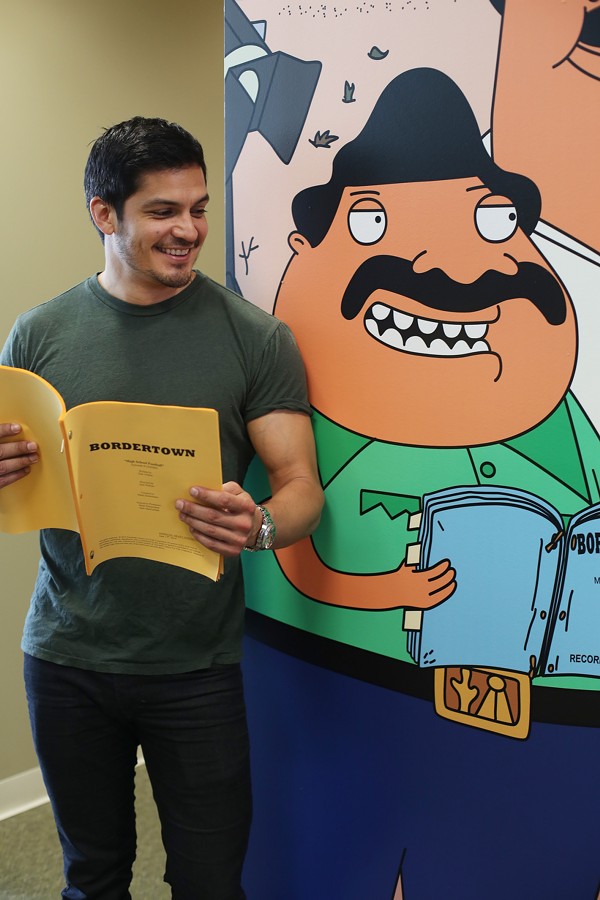 After graduating from Central Catholic High School in 1994 and earning his BA in English from Stanford University four years later, actor Nicholas Gonzalez moved to Los Angeles to pursue his dream in the entertainment industry. Since the late 90s, Gonzalez has landed acting gigs on a number of TV shows, including Undressed, Sleepy Hollow, and Jane the Virgin. He is best known for playing young boxer Alex Santiago on Showtime’s Resurrection Blvd. for three seasons.

On his new show Bordertown, an animated series executive produced by Seth MacFarlane (Family Guy), Gonzalez lends his voice to three characters: Ernesto Gonzalez, a family man and Mexican immigrant living the American Dream in a desert town on the U.S.-Mexico border; J.C. Gonzalez, Ernesto’s conceited nephew who is marrying the daughter of the border patrol agent living next door; and Pablo Baracuda, the main villain of the show who is “a cross between El Chapo and Pablo Escobar.”

Gonzalez, 40, spoke to the Current last week about his new show and what deeper messages he hopes viewers find between the jokes and biting satire.

Bordertown premieres Jan. 3 on Fox. New episodes can be seen Sundays at 8:30pm.

Since animated projects are fairly new to you, is it surreal to see these characters speak and hear your voice come out of them?

Yeah, it’s a trip! Two of the characters I do, Ernesto and his nephew J.C., talk to each other, so during the table read, I get to do it all. J.C.’s voice is a lot like mine, just more earnest and a little more nasally. (Laughs) I kept trying to come up with all these funny things to do with his voice, but [producers] told me, “Nah, we just want him to sound a little annoying – kind of like the way you talk.”

Border issues are major part of the national debate right now. Is Bordertown going to try and join this conversation?


Yeah, that’s what we want to do. We have a message. On the show, everybody is lambasted from liberals to conservatives. This Donald Trump thing started off very funny and now has become really insulting and dangerous. It’s a show like this that’s going to show people why that is. We take a lot of things to the absurd, which is how satire works. We take a ridiculous notion like building a border wall and say, “OK, what would that look like?” The results are as asinine as the idea is.

Talk about the stereotypes depicted on the show. Even though it’s satire, do you think some Latino viewers will be offended?

We’re using a stereotype, yes, but we’re turning it on its head and making a bigger commentary about it. I’m not a gardener, but that doesn’t change the fact that there are all these different representations of [Latinos] that actually exist. There are a bunch of us who are gardeners and there’s nothing wrong with that. It’s a noble profession. There are also jokes on the show that, if you laugh at them, say a lot about you and maybe how messed up you are. I think if you’re intelligent and ready to take one on the chin every once in a while, you’re going to love the show.

More mature animated shows like The Simpsons have made room over the years for a few Latino characters like Bumblebee Man, but nothing like what Bordertown is trying to do. Do you think as the cultural landscape in the U.S. is changing, this is something the TV industry needed?

Yeah, I think it’s needed across the board. Sure, there are tertiary characters in The Simpsons, but in Bordertown we have three-dimensional characters that we’ll be able to show more of and get into their motivations. It’s a point of view that needs to be represented.

How does the dynamic change on a show like this knowing there are a handful of Latino writers in the writing room? Do you think a show like Bordertown could do what it’s doing if it was a bunch of white guys writing the jokes?

That’s the way it normally is! There are a lot of shows that are only written by white writers. Is it nice that there are Latino writers on this show that are pulling from personal experience? Yes! The show has a lot of different Latino writers, from those who are highly politicized to those who are just bringing the funny. I think it’s indispensible. With a show like this, you definitely want to get those representations right. Sometimes other non-Latino writers can handle it and that’s fine, but I think it’s better to get something more personalized. I’m more trusting knowing it’s coming from someone who has had that experience.