In 2007 Lavell Crawford was runner-up on NBC’s Last Comic Standing, a fact he states at the beginning of his 2011 Comedy Central special Can a Brother Get Some Love?, not to brag but to lament the lost opportunities for all the trash he could’ve talked had he won. Gleefully describing the way he would’ve told off women who rejected him and teachers who belittled him, Crawford displays a jolly hedonism not unlike the contented grunts Huell, his character on Breaking Bad, makes after giving into the urge to lie down on that irresistibly comfy-looking cash pile. $26.50-$36.50, 8pm Fri, Tobin Center for the Performing Arts, 100 Auditorium Circle, (210) 223-8624, tobincenter.org. — Jeremy Martin

Boricua Carmelo Anthony makes his only SA appearance this year when the New York Knicks visit the AT&T Center, where the Spurs have been dominant. Anthony passed NBA icon Larry Bird on the all-time scoring list earlier this season, but the Knicks have collectively struggled with consistency on a night-to-night basis. The lone bright spot for New York has been the emergence of Kristaps Porzingis who is right on the heels of Karl Anthony Towns for Rookie of the Year honors. At 7’3”, Porzingis has shown deft handles and solid range, particularly for a 20-year-old in the NBA. Squaring off against LaMarcus Aldridge and David West, it’ll be interesting to see how the rookie responds to Friday’s crash course on playing power forward in the pros. $52-$220, 7:30pm Fri, AT&T Center, One AT&T Center Pkwy., (210) 444-5000, attcenter.com. — M. Solis

Collective Fridaze is a new, inclusively minded event, brought to you by SATX Music, local indie-rock outfit Collective Dreams and Bottom Bracket Social Club. The aim of the (for now) loosely organized all arts/crafts celebration is to increase cross-pollination between the various domains of creative expression, from music to visual art to everything else. Slated to occur the second Friday of every month, this event could be quite the boon for the local arts and music community if it gains traction. ATX’s April Ham Legion will perform as well as the host band. Free, 9pm-2am Fri, Bottom Bracket Social Club, 1603 N. Colorado St., (210) 267-9160, facebook.com. — James Courtney

The wonderfully wacky Overtime recently announced a 2016 season packed with such original oddities as Eric Appleton’s Ghostbears! and Jens Rushing’s Locolobo: A Punk Prometheus Psycho Wolf Musical Comedy. But before any of those theatrical gems get unleashed onstage, SA’s “theater for the people” plays host to a short-run show created by choreographer, actor and Artist Foundation grant winner Stephan Gaeth. While its name might conjure cottonwoods, hackberries and other “trash trees,” the movement-based improv piece concerns a tree built from trash following an apocalyptic event. $10-$14, 8pm Fri-Sat, The Overtime Theater, 1203 Camden St., (210) 557-7562, theovertimetheater.org. — Bryan Rindfuss

It may be a new year, full of possibilities, etcetera, but, let’s face it, things are pretty depressing in America today. A hate-spewing imbecile is polling well in the GOP primaries, mass shootings are basically a daily occurrence, and when you watch the news, it seems that the superficial, the bigoted and the ignorant are the majority. In such a context, it’s not hard to see DreamWeek, “a 12-day summit [hosted in San Antonio and] developed to promote an exchange of ideas on universal issues facing our multicultural communities,” as a necessary injection of hope, empathy and reason. The onslaught of associated events begins Friday with a keynote breakfast address by Martin Luther King III (7:30am, Briscoe Western Art Museum, Jack Guenther Pavilion, 210 W. Market St.), and wraps up January 19. Besides the opening talk, other early DreamWeek highlights include Men Against Violence Against Women (noon Sat, San Antonio Mennonite Church, 1443 S. St. Mary’s St.) and Voter Registration Rock (8pm Sat, The Phantom Room, 2106 N. St. Mary’s St.). Free, times and locations vary, visit dreamweek.org or call (210) 444-2315 for details. — JC

As popular with veteran alt-comics as he is with Mormon missionaries, stand-up Brian Regan told us in 2014, “My perspective is just a person trying to get through life ... but other people are getting in my way and diverting things.” The persona Regan adopts onstage, however, is less a perpetually exposed nerve à la Bill Burr or Larry David, but a childlike loudmouth oaf, made cranky by his confusion at the world around him. Plenty of performers have made us laugh by making themselves clowns, but few have the courage or skill to make the clowns so closely resemble the audience. $47.50-$52.50, 8pm Sat, The Majestic Theatre, 224 E. Houston St., (210) 226-3333, majesticempire.com. — JM

For the 31st edition of their annual Performance Party, the experimental virtuosos of Jump-Start Performance Co. team up with gracious guest artists — “the famous and beloved as well as the soon-to-be famous and currently intriguing” — for an evening of strange and beautiful music, theater, dance, poetry and art staged at three venues: Jump-Start Theater, The Uptown Studio and Nite Lite. $5 (includes access to all three venues), 7-11pm Sat, 700, 710 & 714 Fredericksburg Road, (210) 227-5867, jump-start.org. 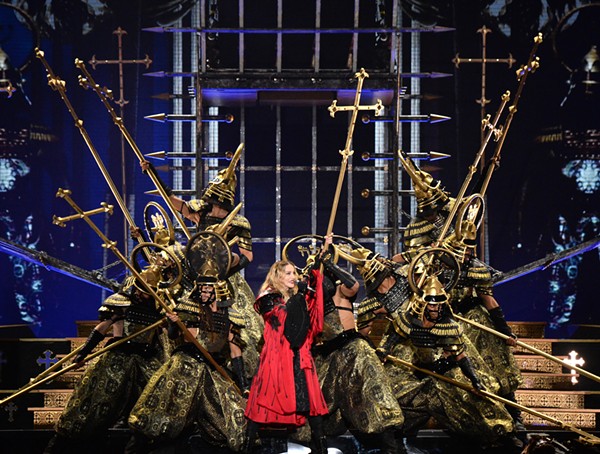 If the Material Girl is your church, then you better drop big bucks into collections, because word on the street is that her Rebel Heart Tour boasts pole-dancing nuns. Hailed by VH1 as a "larger-than-life display of cutting-edge pop showmanship, filled to the brim with zesty costumes, intricate choreography, and a militant, rigid precision," the two-hour spectacle balances new material ("Bitch, I'm Madonna," "Ghosttown," etc.) with reworkings of classics (from "Lucky Star" to "Like a Virgin") and even a ukulele-infused cover of Édith Piaf's iconic torch song "La Vie en Rose." $42-$357, 8pm Sun, AT&T Center, One AT&T Center Pkwy., (210) 444-5000, attcenter.com.

Because the 7 p.m. show sold out, actress/comedian/’90s It Grrrl Janeane Garofalo is scheduled to perform a second time, but there’s no guarantee the shows will be all that much alike. Sometimes criticized for bringing notes onstage, Garofalo (Reality Bites, Wet Hot American Summer) has more of a loosely organized discussion agenda than a memorized act, and digressions and derailments are part of the never-fully-finished creative process. Garofalo’s only real schtick is bringing her full, unapologetically imperfect and outspoken self to the stage, forgoing a well-oiled killed-’em-in-the-Catskills routine in the interest of having an actual, honest discussion. Bottom line: Many worthwhile, honest and hilarious things will undoubtedly be said, but nobody knows what they’ll be ’til she says them. $29.50, 7pm & 9pm, Tobin Center for the Performing Arts, Carlos Alvarez Studio Theater, 100 Auditorium Circle, (210) 223-8624, tobincenter.org. — JM