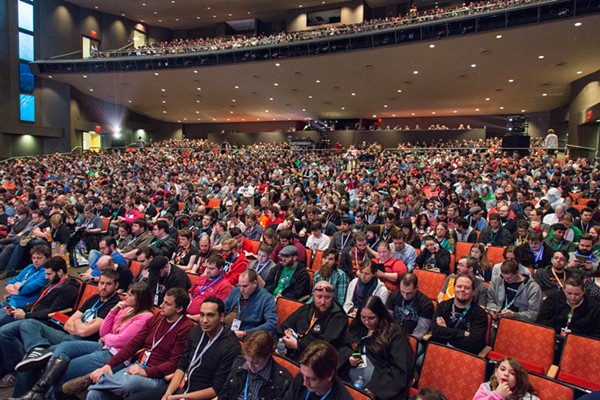 Pax South will invade the Henry B. Gonzalez (900 E. Market St.) on Friday, January 29 through Sunday, January 31 with a plethora of games, bands and panels. To help organize the busy weekend, we picked five panels that shouldn't be missed.

What’s it about:  CEO of Boss Key Productions, Cliff Bleszinski, talks about his upcoming project with his new studio.

Why you should go:  Cliff Bleszinski, known to many gamers by the nickname “Cliffy B.,” has been an integral part of the video game industry since 1999 when he helped developed the hit game, Unreal. After the success of Unreal, Bleszinski and the studio he worked for at the time, Epic, became a force in the industry with their Unreal Engine, which is the tool of choice when developing games. He’s also the designer of the Xbox-platform hit, Gears of War. At his new studio, Boss Key Productions, he plans on tapping into the free-to-play FPS subgenre with Lawbreakers. With a resume like that, you can expect a lot of stories from Cliffy.

What’s it  The two guys behind PAX and everything else Penny Arcade, Jerry Holkins and Mike Krahulik, answer questions from the audience for a whole hour.

Why you should go:  For a couple of guys known best for their webcomic, “Penny Arcade,” Holkins and
Krahulik become important contributors to the video game industry. By creating the largest fan-focused expo in the U.S., the pair has a platform for indie developers to show their wares to thousands of gamers. If their webcomic or their contributions to video games doesn’t sell you on seeing them, then know that they’re both funny and the Q&A will be filled with laughs. Remember, there are two Q&As as they tend to fill up pretty easily.

What’s it  Firaxis, developer of the upcoming XCOM 2, will talk about the development of
the game, modding for the game and show some new gameplay video.

Why you should go:  XCOM became a critically-acclaimed strategy series once again after its revitalization in 2012. It was June 1, when the reveal for XCOM 2 happened, and fans of the series are waiting patiently for any info about the game. This panel will be the first time Firaxis has gone at length the development of the game. The team also plans to explain how modifications, a first the series, will work in the game. Plan to show up early as fans will stay in line for hours before the panel starts.


Gamedev in SA:  Can We Attract Business to the Alamo City?

What’s it about:
A roundtable of local video game developers the industry and how to make the city more inviting to other developer studios.

Why you should go:
San Antonio has a tiny video game developer scene that wants to grow. Use this panel as a good opportunity to meet the SA locals who may make the next indie hit or leave to work on a future big budget title. Those who have great hopes of becoming a figurehead within the industry, but don’t know where to go in town to find like-minded individuals can possibly meet some future developers at the panel, too.

What’s it about:  The final two players in the Omegathon meet for the last time to see who will be crowned champion.

Why you should go:  Over the course of the three days of PAX, selected individuals compete in a variety of games that span from retro classic to current hits. On occasion, the games go analogue with table top
games like Jenga. It’s an exciting sight to see when two competitors who are fatigued from the pressure and competition to finally have their heart stomped on when the mystery game is revealed. It’s hard not to be part of the frenzy as you stand in the crowd cheering on the finalists.