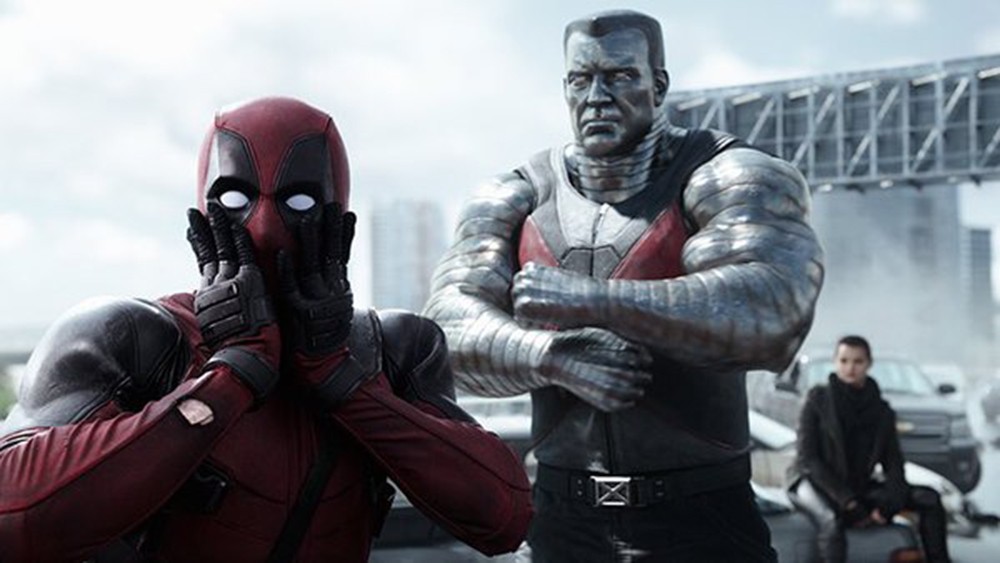 Deadpool seems like the one comic book character that would be impossible to get right onscreen. Not only are the comics geared toward adults but they also take new approaches to story telling that seem too complicated for a film to pull off effectively. Fans have always wanted a film based on the wisecracking anti-hero, but approached cautiously fearing that it wouldn't be done right and Marvel Studios might water down the hardcore nature of the comics and dull out a PG-13 version.

Deadpool doesn't take long to inform viewers of its meta tone. The opening credits reveal a frozen tableau of a car accident. The camera pans through different fragments of the crash while generic descriptions of the films cast (as opposed to actual cast names) are flashed across the screen. Every frame that the camera lands on is tongue-in-cheek and shows Deadpool freeze-framed while beating up the bad guys in varied hilarious ways.

The story follows Deadpool (Ryan Reynolds) on his path of revenge to find and kill a super-powered mutant aptly named “Francis” who turned a cancer-riddled mercenary named Wade Wilson into a disfigured mutant with increased speed, strength and healing factor.

While all that sounds like “Francis” did him a favor – considering it saved Wade from dying of cancer – it also deformed him and made him mentally unstable. Francis is also a bit of a jerk.

Along the way, Deadpool is joined by two X-Men alumni, the indestructible but morally sound “Colossus” and the angsty teenager “Negasonic Teenage Warhead.” These popular X-Men characters aren't the only cameos in Deadpool. It is filled with easter eggs that are almost too many to count and offer the film plenty of re-watchability.

Origin stories have become a bit of a nuisance in ubiquitous comic book-based films. I mean, how many times can we watch Peter Parker’s Uncle Ben get shot in Spider-Man? It has become a problem because these films don't try to innovate the origin story. Deadpool, however, finds a way to innovate and breathe life into the stale origin story approach. It does so by bouncing back and forth, between the present and the past, as opposed to telling it in the start-to-finish format. While it is still an origin story at its heart, it is able to distract just enough to not think too much about it.

Deadpool earns its hard R rating. When it was announced that the film would be rated R, I figured that this would be due to a couple of F-bombs thrown in for good measure, but those F-bombs are only the tip of that rating. This film is definitely not for kids, it is unflinching with its violence and adult humor. The rating is something that could have made or broke this film and luckily for us they decided to stick to a very brave R.

Ryan Reynolds completely owns his character and sacrifices everything in order to give fans a personality he’s has been trying to put onscreen for ten years. Tim Miller is visionary and steadfast as the director. It is hard to believe this is his first feature film and makes him a director to keep an eye on.

The character of Deadpool was made famous in comics by managing to break the fourth wall between himself and the reader. The film manages to keep those magical fourth wall breaks intact. There are plenty of times that our anti-hero turns toward the camera and talks to the audience and every time he does is more brilliantly hilarious than the last.

It is hard to believe that this movie exists and even more difficult to believe they got it right on the money. Deadpool easily manages to become my new favorite Marvel Studios movie and comic book movie in general. It has the capability to usher in an exciting new era of R rated comic book movies. It is easy to tell that all parties involved were devout Deadpool fans, which goes a long way into creating the world that the film constructs. It is really unlike anything before; the action, wisecracking and raunchy comedy are plain awesome. I can’t wait to get to the theater to see this one again.