The Lady in the Van is Supes British

In the spirit of opportunistic tomfoolery – the brash, narcotic showmanship of Donald Trump who, make no mistake about it, is an intelligent American capitalist, or the sheer breadth of presence of Kim Kardashian, a beautiful woman and completely useless  – this piece is written. In the spirit of Kenneth Anger, Donald J. Trump and Kim K. I don't mean what I say and I do what (or whom) I do.

Now, as the stereotype of the typical American male of lesser intelligence, particularly in grammar and communication, I give you my review of The Lady in the Van.

The Lady in the Van is British as fuck. Like, it's got nothing going on. Pretty boring. I mean, the main dude is super gay, I think. He has dudes over all the time at night and I'm pretty sure they bone. I mean, that's cool. But that's not the point.

So. This old lady, the chick from Harry Potter, y'know, the old witch, she was a good guy in the movie, anyway, she is this homeless lady that has a van. She moves up and down the street in this one neighborhood all the time. The hoity-toities don't want her, but they're British and all socialist and shit so they have to act like they care for the poor and all that. Libtard stuff.

Anyway, so the old lady's moving all around the neighborhood and it's super boring and she decides upon the main dude's house as where she wants to park. And she's famous for parking in one spot for like 15 years. And nobody wants to tell her anything 'cause they're all posh and stuff. Posh, is British slang for fancy. Or classy. Like the Dos Equis guy.

Anyway, so the dude is pretty nice to her. Nicer to her than most people. So she decides to park in front of the dude's house. He starts learning all this stuff about her: she used to be a nun, there's a guy that keeps pestering her late at night, she was this badass pianist, was in a psycho asylum and escaped and then she hit a dude on a motorcycle with her car. So she starts freaking out and becomes a homeless lady. He learns this last part once she dies. Oops. Maybe I should have said Spoiler Alert! Hey-oh! My bad, y'all. 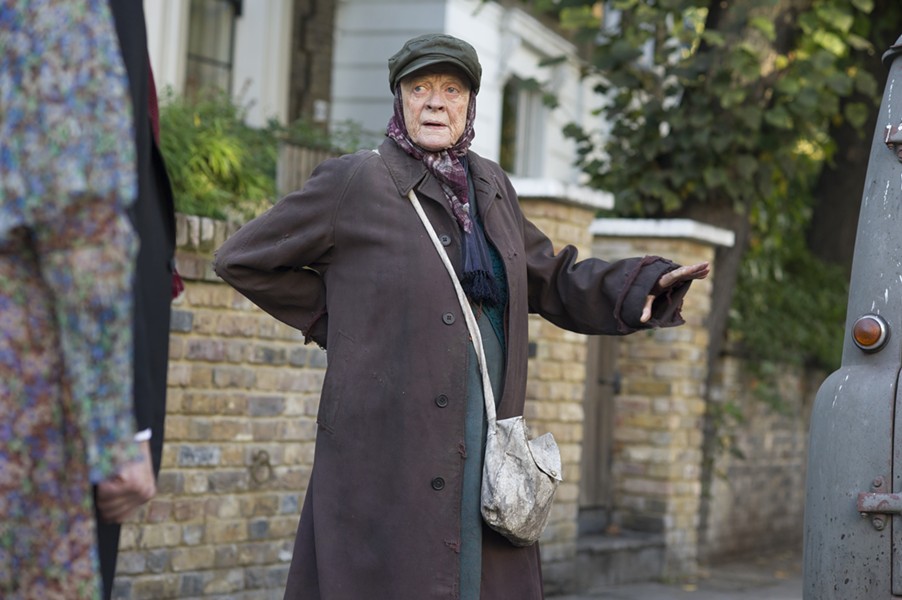 So, the lady, before she dies obviously, moves into his driveway. And she lives there for like 15 years! They don't even really get along or anything. It's not like The Fisher King or Home Alone 2 where the homeless person is like, super cool and nice and all that. They just kinda chill together every now and then, she pees in his place like once every five years –Oh shit! I almost forgot, she poops on the ground all the time! That was pretty funny. He's like walking around her shit all the time. Oh, and his mom is starting to act crazy. He talks some about how the lady in his driveway is kinda taking his mom's place, but he isn't really that close with his mom or the lady in the van.

Anyway, it was a pretty boring movie. I guess the British don't mind. I mean, I can read behind the lines. I saw American Sniper. That shit was pretty hardcore. I mean, I know the government doesn't do everything right all the time and all that. I can read into the stuff below the surface. But this movie didn't really have any of that going on. She was running away from hitting a dude on his motorcycle a long time ago. And she was kinda crazy so she just decided to be homeless. And the dude was probably gay and his neighbors were kinda iffy about it. I don't know. That's about it. One-and-a-half American flags out of five.

And there you have it; a stereotype of a stereotype's review of The Lady in the Van. If this caricature of a presumed caricature sounds like someone with whom you would disagree regarding a British film about a woman – a prisoner of her own guilt – and a playwright who finds a relatively banal surrogate relationship with the curmudgeonly vagabond, coinciding with the mental and physical decline of his own mother, then, by all means, go see The Lady in the Van which will be at the Santikos Bijou Cinema starting Friday, February 12.

ArtSlut The Lady in the Van Maggie Smith
Prev
Next