With booze provided by Blue Moon and zany art dignitaries and rebels aplenty, Contemporary Art Month will once again celebrate its opening at Blue Star Contemporary. The party, which will also mark the opening of three Blue Star exhibits — Justin Boyd’s “Going on Going,” Hans Ulrich Obrist, Christian Boltanski and Bertrand Lavier’s “Do It & Do It” and Works Progress’ “Blue Star Ice Company” — is a great moment to network, clear your mind, and begin preparations for an art binge of San Anto proportions. Miss CAM Antonio will also be crowned at this event, which will be followed by the CAM Dance Happening Fundraiser ($10 entry donation), a pop-up art installation and after party hosted at Brick from 9 p.m.-midnight. Free, 6-9pm Thu, Blue Star Contemporary Art Museum, 116 Blue Star, (210) 227-6960, bluestarart.org. — James Courtney

In addition to the 30th anniversary of Blue Star, the 2016 edition of CAM marks the fifth anniversary of Amada Miller’s Hello Studio. After showcasing 50-plus Texas artists in a compact locale, the artist-run space is stretching its wings in a freshly refurbished upstairs unit combining a gallery and three studios — one of which is dedicated to a new residency program. As the inaugural resident, painter T. Hopkins unveils the fruits of his labor with “Plasticity,” an exhibition highlighting his practice of repurposing plastic bags and other discarded items as unlikely canvases. Free, 6-9pm Fri, Hello Studio, 1420 S. Alamo St., Suite 209, (210) 291-8640, hellostudiosa.com.
— Bryan Rindfuss

The Alamo City will unite Saturday to “uplift the voices of all women and girls” at the 26th annual San Antonio International Woman’s Day March & Rally. The march takes to Downtown to highlight the needed effort to end racism, classism, homophobia, sexism; to stop violence against women, children and people of color; and to speak for those whose voices aren’t heard or respected. A rally follows the march and will include, music, activities, community resources info, free STD testing, and speakers and performers, examining a variety of social issues, including transgender rights and climate change. Free, 10:30am, Plaza del Zacate, 501 W. Commerce St., sawomenwillmarch.org. — Mark Reagan

When paired with the controversial cancellation of this year’s CAM Perennial, the closure of the seedy Fox Motel (host of the first four editions of “Seven Minutes in Heaven”) might make one wonder if this is the CAM of vanishing venues. But for artist/curator Jessica Garcia and her aptly named Invisible Gallery, the (peep) show must go on. Billed as a “one-night stand,” her naughty pop-up’s fifth incarnation is set to take over a warehouse with NSFW offerings created by the likes of Albert Alvarez, Julián P. Ledezma, Logan Magz and the collectives Foursome and Erotic in Texas, plus music by Austin-based DJ Dirty T. Free, 6-10pm Sat, 1202 W. Elsmere Pl., invisibleartgallery.com. — BR

As we attempt to apprise our readers on even a fraction of the endless arty sweetness that is CAM, we’d be remiss not to mention Saturday’s opening of “That Thing on the Side of the Road,” a show that thematically pairs music and visual art in a unique way. Curated by UTSA professor/all-around badass Hills Snyder and presented by the Spare Parts Mini Art Museum, the show unites 17 visual artists and eight musicians — all responding, in their own mediums, to the titular phrase. The resulting small-scale artworks and songs promise to be as diverse as the impressive group of artists Snyder recruited. Free, 7-9pm Sat, Period Modern, 4347 McCullough Ave., (210) 902-1217, contemporaryartmonth.com. — JC

Kings center-forward DeMarcus Cousins may or may not be the best man in the NBA but he’s definitely the most mercurial. Back in 2012, he was suspended for two games after confronting San Antonio icon Sean Elliott following a loss to the Spurs in Sacramento. At 6-foot-11 and 270 pounds, "Boogie" averages a double-double and was selected to his second consecutive All-Star Game just last month. Cousins’ individual success has yet to translate into consistent wins for the Kings this season, and the team stands outside of the playoff picture in the West. The dysfunction in Sacramento doesn’t rest solely on Cousins’ shoulders, yet he often carries the blame. A physical matchup with David West should help Boogie relieve some tension. $40-$1,952, 7:30pm Sat, AT&T Center, One AT&T Center Pkwy., (210) 444-5000, attcenter.com. — M. Solis

This year’s CAMx exhibit, hosted by Sala Diaz, is heavy. Literally. The 2,600 pounds of material, designed and crafted for the “Mock Pavilion” exhibit by Stephanie Kantor — including 1,600 hand-painted tiles, 36 ceramic vessels, tapestries and custom wallpapers — made the long journey from her home base at Black Cube in Denver to San Antonio by way of a huge shipping container. Kantor, selected by Cortney Stell of Black Cube as this year’s CAMx artist, created her installation with Sala Diaz’s repurposed environs and ethic in mind. Additionally, “the idea to engage the structure of the pavilion came from a recent trip to Istanbul, Turkey,” she told the Current last week. Drawing on a visit to Topkapi Palace, “one of the most beautifully tiled architectural spaces in the world,” she decided “to combine the site of the pavilion with museum period rooms and the interior of a home as collection.” The resulting indoor/outdoor installation is a multicultural (and magical) transformation of the space that sees the artist “focus[ing] on a few cultures per room and [thinking of it] as a tableau.” Free, 6-10pm Sat, Sala Diaz, 517 Stieren St., (972) 900-0047, contemporaryartmonth.com. — JC 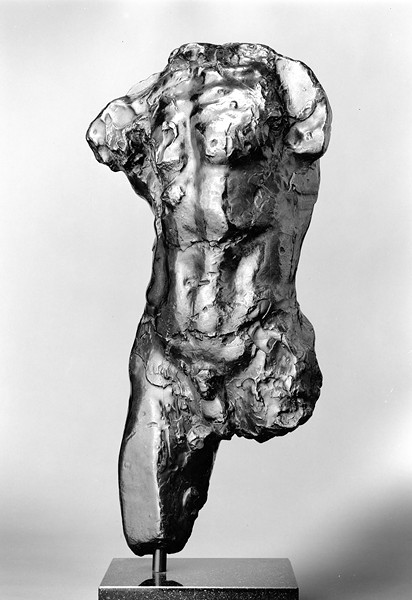 After joining forces on Wall Street in 1970s-era New York, Iris and B. Gerald Cantor established a foundation “committed to sharing the treasures in their art collection with the broader public.” Now encompassing the world’s largest private collection of works by Auguste Rodin (known best for his iconic bronze The Thinker), the Iris and B. Gerald Cantor Foundation has taken shape in exhibitions staged in such high-profile locales as Rockefeller Center’s Channel Gardens and the First Ladies’ Garden at the White House. Commemorating the 100th anniversary of the modern master’s death, the touring “Rodin: The Human Experience, Selections from the Iris and B. Gerald Cantor Collections” brings together 32 bronzes, including depictions of writers Victor Hugo and Honoré de Balzac and God (which oddly doubles as self-portrait), his Torso of the Walking Man and works derived from a casting of his monumental sculptural group The Gates of Hell. $10-$15, 10am-5pm Sat-Sun, San Antonio Museum of Art, 200 W. Jones St., (210) 978-8100, samuseum.org. Through May 29. — BR

When broke playwright David Shayne needs cash for his new Broadway production, he makes a deal with the mob to get the funds. The catch? That gangster’s got a girlfriend and she’s looking to act. Based on Woody Allen’s 1994 film, the musical comedy Bullets Over Broadway promises a score ripped right out of the 1920s and a bevy of wild characters, including a henchman named Cheech with an itch to rewrite and a leading fella with an insatiable appetite. Whatever your poison, this one-night-only staging boasts “the most effervescent new musical in years.” $24.50-$74.50, 7pm Sun, Tobin Center for the Performing Arts, 100 Auditorium Circle, (210) 223-8624, tobincenter.org. — Murphi Cook