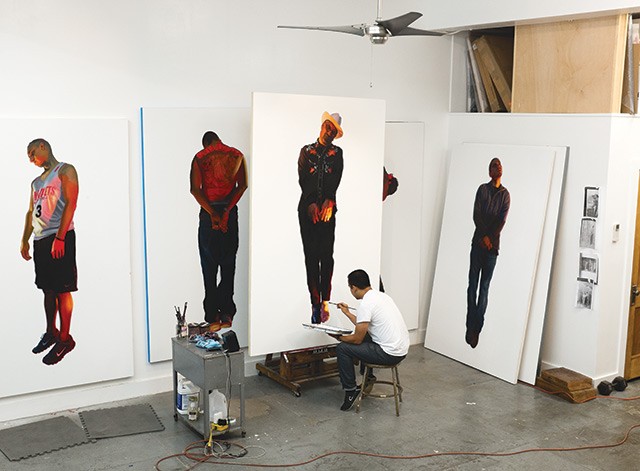 San Anto artist Vincent Valdez just received a great write-up in The New York Times for a painting he is working on that depicts a bunch of Ku Klux Klan members.

NYT Editorial Observer Lawrence Downes says the 6-feet-high and 30-feet-long, four-paneled painting titled "The City" is prophetic, though unintentionally, as white supremacy has become a hot-button issue in the 2016 presidential race. Valdez was already working on the painting before Donald Trump allegedly didn't know who racist David Duke was.

Thanks for the insight, Lawrence downes and the NY Times". Pickup your hard copy mañana!The painting will premiere at David Shelton Gallery , September 9.


"Since the night I first saw it, the image has haunted me, along with the thought that Mr. Valdez has captured, in a single composition, a selfie for 21st-century America," writes Downes.

Valdez tells The New York Times that "The City" pays homage to Philip Guston, an American artist whose subject matter included cartoon-like Klan figures in the '60s, and to musician Gil Scott-Heron.

“You get to decide what they’re plotting. Maybe they’re not plotting anything," Valdez told Downes. “What I love about the us and them is, who’s the us and who’s the them? Because it goes both ways here. You don’t really know what it is they’re doing.”

The painting will premiere September 9 at the David Shelton Gallery in Houston.