As in seasons past, the spirited potential of the Chicago Bulls has been derailed by injuries. Joakim Noah is out for the season after shoulder surgery; Jimmy Butler has been battling a bum knee; and Derrick Rose is day-to-day due to a pesky hamstring. Injuries are a daily occurrence in the NBA — just ask Manu Ginobili. Despite these setbacks, the Bulls are currently holding onto the last playoff spot in the East. The surprising bright spot for Chicago has been Pau Gasol, who is in the midst of an All-Star caliber, resurgent season. Things are looking up as Butler, a native Texan raised in Tomball, is projected to return to the lineup in time for his team’s Alamo City appearance. Kawhi Leonard and his stellar defense should make for an intriguing welcome back. $60-$2,142, 7pm Thu, AT&T Center, One AT&T Center Pkwy., (210) 444-5000, attcenter.com. — M. Solis

One of the first nostalgic cash-ins to make a pile of money selling Baby Boomers their past, director Randal Kleiser’s 1978 musical rom-com Grease is now old enough to reminisce about itself. Remember when John Travolta was a heartthrob with hit records? Remember when people used to remember who Frankie Avalon is? Local stand-up comics Mike V. Suarez and Joey McCormick are scheduled to provide a live commentary track that will probably make “Look at Me, I’m Sandra Dee” seem like a gentle jest. Yes, Sandy, we are totally making fun of you. $5, 10pm Fri, Blind Tiger Comedy Club, 902 NE Loop 410 Loop (inside the Magic Time Machine), (210) 828-1470, eventbrite.com.
– Jeremy Martin

For those who’ve grown tired of “Netflix and chill” dates, the Overtime beefs things up with its Serial Box series. This season takes off with Rift Riders, a sci-fi tale of abduction. Air traffic controller Jonah Foster is in the throes of a miserable day when he’s suddenly snatched by aliens; once abducted he realizes the little green men have disappeared. Through July, audiences can join Jonah and a slew of other abductees as they attempt to figure out what happened and man the alien ship back to Earth. Michael Burger writes and directs all six monthly one-hour episodes. $10-$15, 8pm Fri-Sat, 7pm Sun, The Overtime Theater, 1203 Camden St., (210) 557-7562, theovertimetheater.org. — Murphi Cook

As Contemporary Art Month reaches full bloom, Open Studios all around town are highlighting the latest and best work by a growing number of local (and visiting) artists. Two particularly exciting Open Studios going down this Saturday are at Vic de la Fuente’s studio (noon-6pm, 816 Camaron St., #211, victordelafuente.com) and Flax Studio (7-10pm, 1906 S. Flores St., flaxstudio.wordpress.com). Flax is run by painters Katy Silva and Andrei Renteria and just opened its doors back in January. Meanwhile, de la Fuente will be showing his moving, spiritual work, much of it made using the ancient Greek process of encaustic painting, which involves hot, pigmented wax. For the full CAM calendar, visit contemporaryartmonth.com.
— James Courtney

Hailing from Corpus Christi but now firmly ensconced in the arts and culture of San Anto, Ana Fernandez paints in the romantic (yet totally realistic) manner of someone who has truly absorbed the Tex-Mex kitsch, absurdity and beauty of life in urban South Texas. Her work celebrates, through symbol-laden street scenes and voyeuristic looks at house fronts de la gente, the color, power, pride, resilience and penchant for drama (good and bad) of her culture. These works sing with the vibrancy of tejano life. This Saturday’s CAM exhibition opening at Silkwörm showcases Frenandez’s recent watercolors. Free, 7-11pm, Silkwörm Studio and Gallery, 1906 S. Flores St., (210) 607-1322, contemporaryartmonth.com. — JC 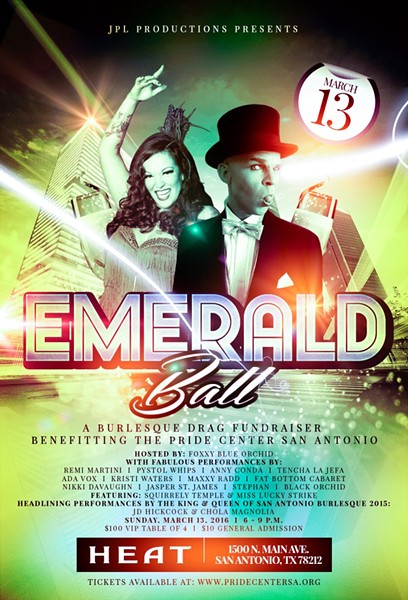 From its earliest stages as a group of concerned citizens (2009) to the development of a board (2011) and the opening of administrative offices on East Mistletoe (2014), the nonprofit Pride Center San Antonio has dedicated itself to supporting the lesbian, gay, bisexual, transgender, questioning and ally community in Bexar County. As a means to further the center’s efforts to improve the quality of life for our LGBT community, some of San Antonio’s brightest burlesque and drag talents join forces for the Emerald Ball. Presented by San Antonio Current/Out In SA photographer Julián P. Ledezma’s JPL Productions and hosted by gender-bending glam-bear queen Foxxy Blue Orchid, the fifth annual “burlesque drag fundraiser” promises “show-stopping performances” by JD Hickock and Chola Magnolia (reigning King and Queen of San Antonio Burlesque), the Pastie Pops’ own Jasper St. James, Stars and Garters mainstays Squirrely Temple and Miss Lucky Strike and members of Austin’s Fat Bottom Cabaret. $10, 6-9pm, Heat Nightclub, 1500 N. Main Ave., (210) 227-2600, pridecentersa.org. — BR