Fantasy show Lucifer, which aired its eighth episode of season one yesterday, follows the Lord of Darkness as he abdicates his throne in Hell and moves to Los Angeles to live among humans and try to understand what makes them tick. While in LA, Lucifer Morningstar (Tom Ellis) becomes a night club owner and consultant for the Los Angeles Police Department.

In the show, actor and San Antonio native Kevin Alejandro (True Blood, Southland) plays Det. Dan Espinoza, an LAPD homicide detective and the ex-husband of Chloe Decker (Lauren German), another LAPD detective who is teamed up with Lucifer on a case. When Lucifer takes a liking to Chloe, Det. Espinoza makes it his mission to win his ex-wife back.

The Current spoke to Alejandro last week about his new show. New episodes of Lucifer air Monday nights on Fox at 8pm CT.

I know you were born in San Antonio, so when is the last time you came for a visit?

Yeah, I was born in San Antonio and moved to West Texas when I was probably six or seven. Then I went to college at the University of Texas at Austin. I try to get back to San Antonio every year if I can. Fortunately, I’ve been working a lot and doing my thing, so it’s been about two years since I’ve been back. But I’m ready to get back there again. I have family there that I go visit.

Talk about what drew you to a character like Det. Espinoza in Lucifer.

First of all, to take a show called Lucifer and put it on a network automatically intrigued me because I thought it was such a risk. As I got more into it, I saw that it was a really great story with an existing character from the comic-book world. [Det. Espinoza] is a guy who got to the top and lost his family along the way and now wants to get his family back. Comedy comes from him butting heads with Lucifer because they are vying for the attention of the same woman. They pretty much turn into two 12-year-old boys puffing their chest out against each other the whole time.

Was there any concern on your end that a show like Lucifer was turning the Devil into a likable character or hero?

You know, I think that’s what makes it interesting. We all have an idea of who the Devil is. The way we present [the show] is that the Devil is tired of being the Devil. He wants to know why people make certain decisions in their life. People say, “The Devil made me do it” as opposed to taking responsibility for their own actions. But the Devil sees himself as the punisher. He’s not the one that makes you do the bad things. So, he wants to come to the world and see why humans are the way they are. Along the way, he starts to experience emotion and starts to think like a human and it’s tearing him apart. What better place in the world to figure out why people are the way they are and to redeem yourself than Los Angeles? It’s a place where you can go and reinvent yourself. I think that’s what [the Devil] is trying to do.

So, what do you say to critics like the American Family Association that started a petition last year to stop Lucifer from airing?

You know, I think everyone is entitled to what they believe in. I think any press is great press. I’m actually flattered that an organization would take the time to sit there and take a look at our show and immediately have an opinion about it. That’s why we do what we do – to give you the opportunity to either join us on this journey and have fun and relax and realize that we’re a bunch of kids playing and pretending in this comic-book universe, or you can judge it. Either way, it’s your choice and I’m happy to give everyone the opportunity to make a choice.

There’s this saying: “I would rather reign in hell than serve in heaven.” Would you?

Oh, man. That’s a good one. I just want to live my life, dude. (Laughs) I want to have smiles all around and have no regrets in my life. Whatever opportunities come my way, I just hope I make the right choices. 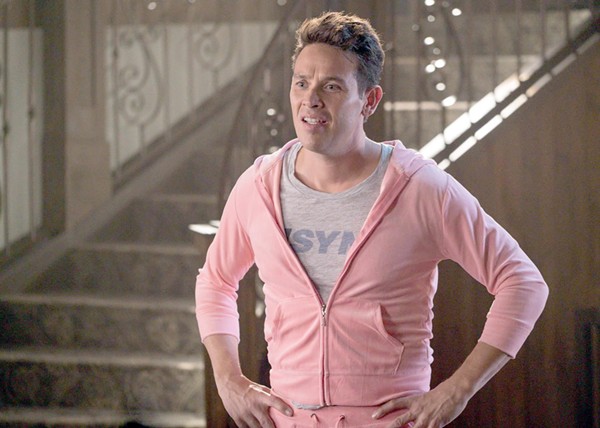 You’ve played some sort of law enforcement agent many times throughout your career. I’m assuming during the last 14 years, you’ve done some kind of research on police officers or FBI agents to help prepare you for these roles. What have you learned about the
law enforcement occupation since you started acting?

One of the first shows I did was called Southland. That was my first real experience with extreme training with [police] ride-alongs and helicopter rides and training in their facilities. If it wasn’t for all that training, I wouldn’t do it justice. I love playing police officers because I have amazing respect for those guys. They are the heroes of our streets. I’m honored to play them. The last people I would want to disappoint are the police officers. I always try to make sure what I’m doing – the way I hold my gun, how I wear my badge, the things they say – rings true to those guys.

Before Lucifer, you starred in other fantasy-based TV shows like True Blood and Arrow. What is it about the fantasy genre that you like?

[The fantasy genre] is relevant and prevalent right now. I’ve been extremely fortunate and blessed to be a part of some really cool and interesting projects. I’m an actor like every other actor who [acts] because they enjoy it. We like challenges that are put in front of us. I’m a surfer in real life. So, acting is like surfing to me. I’m just riding the wave and hoping the ride doesn’t end. But when it does, I know there will be another wave.

If you and the Devil had a guy’s night out at a bar, who would get the girl at the end of the night?