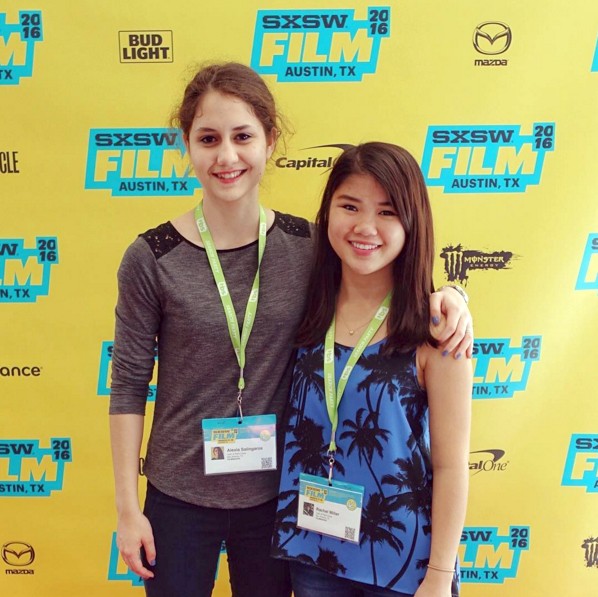 After her third consecutive invitation to compete in the Texas High School Shorts section of the South by Southwest Film Festival, Saint Mary’s Hall senior and local filmmaker Alexia Salingaros has achieved something she’s had her heart set on since her sophomore year.

“I told myself the first year I went [to SXSW] that I would make films until I won the [Texas High School Shorts] category,” Salingaros, 17, told the Current Tuesday night. “And here we go.”

On Tuesday evening, during the 2016 SXSW Film Awards at the historic Paramount Theater in Austin, Salingaros was named the winner of the Texas High School Shorts Jury Award for her short film Lady of Paint Creek. The film, which is based on Alfred Lord Tennyson’s 19th century poem “The Lady of Shalott,” beat out 23 others shorts in the category. Her award was the first presented at the ceremony.

“My heart was racing faster than it ever has as they announced it,” she said.

For her win, Salingaros was presented with a beautiful plaque with the words “SXSW Film Champion 2016” engraved between some festival laurels.

Currently, Salingaros is working on her senior film thesis, a period piece called Louisa. She hopes to submit the film in the 2017 edition of the Texas High School Shorts competition at SXSW.

It will be the last year she can enter a film in the category. Until then, she is working tirelessly on her new film, waiting to hear back from the colleges she has applied to (USC, UCLA, NYU, Columbia, UT-Austin), and enjoying her victory.

“I feel overwhelming excitement to embark on this new journey,” she said. “I’ve learned just how instrumental it is to surround myself with people who support my craft, both artistically and personally.”

See the award-winning Lady of Paint Creek below or make a trip for the final screenings of all the Texas High School Shorts on Saturday, March 19 at 11:15 a.m. at the SXSW Satellite Venue: Marchesa (6226 Middle Fiskville Rd.) in Austin.