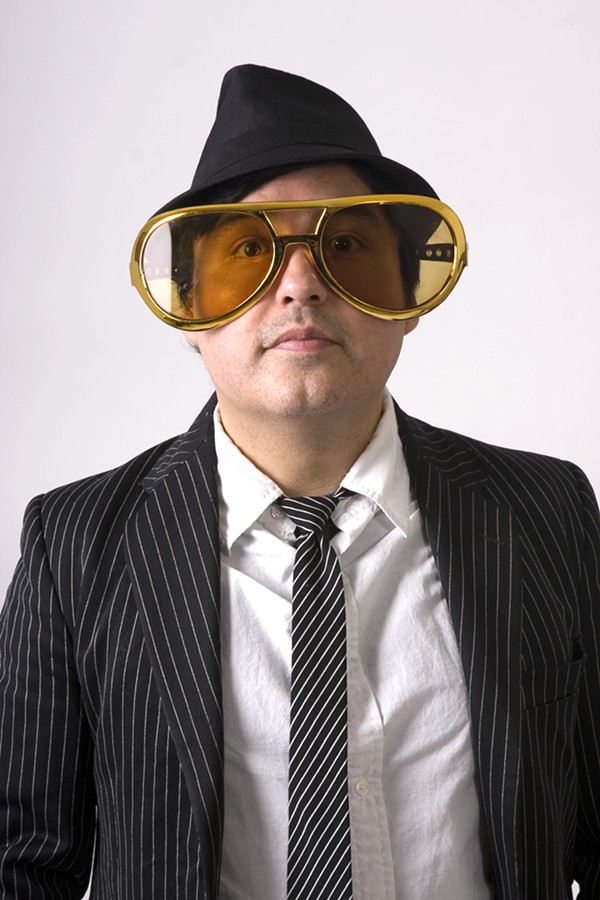 Southtown 101 and R Gallery bring their own brand of San Anto spirit to the endless riffing on SXSW with the SouthXSouthtown exhibition and concert series. While the exhibition has been up since March 4, and features works by local artists Megan Solis, Amada Miller and Alyssa Danna, among others, the concert series kicks off this week. And the 20-band lineup is puro 210, featuring classic oldies (Los #3 Dinners), indigenous punk-rap (Los Nahuatlatos), doom jazz (Royal Punisher), art pop (Buttercup), one-man disco (Henry + the Invisibles, pictured) and much more. $15-$30, 6pm Thu-Fri, 1pm Sat, Southtown 101, 101 Pereida St., (210) 263-9880, southxsouthtown.ticketleap.com. — JC

Returning for a second year, Freetail Brewing Company’s spring brew is a Belgian-style red witbier with a heavy kick of ancho chile, lime juice and salt — Old World flavors getting their asses handed to them by the new. Naturally, when looking for a mascot to rep this cross-cultural pour, the San Anto brewery turned to Piñata Protest, the hometown tejano punks that need no introduction. Ten years into their career, the border-erasing band is as vibrant as ever, thanks to the whirling talent of frontman/accordionist/trumpeter Alvaro del Norte. With Grupo Frackaso, Phantom Rockers, Mexican Elvis. $5, 8pm Fri, Paper Tiger, 2410 N. St. Mary’s St., papertigersa.com.
— Matt Stieb

In the crime drama Paid in Full, Mekhi Phifer, donning a turtleneck and gold chain, looks wistfully off-camera and lays out his career choice — “I love the game. I love the hustle, man.” Memphis trap mastermind Black Smurf shares a similar mindset, opening his video for “Stay Focused” with that quote and posting otherworldly trap to his SoundCloud at an astonishing pace. Like the best of Southern rap, Smurf aims for style and essence over lyrical acumen. This is music to be played loud at the gas station, with bass knocking snacks and blunt wraps onto the aisle floor. With Jeffery, Ma$$ie, PMG and more. $15-$20, 7pm Fri, The Korova, 107 E. Martin St., (210) 226-5070, thekorova.com. — MS

Through daytime television, tawdry paperbacks and pop-psych seminars, the self-help industry pulls in an annual $10 billion, promising the secrets to defeat procrastination, de-clutter the home and achieve the body one has always imagined living in.
Because we all strive to be better, everyone is guilty of some self-help motivator. Mine is Sheer Mag, a straight-up rock ’n’ roll band from Philadelphia that’s tighter, tauter, hotter and more powerful than your favorite athlete’s ass. When I need a pick-me-up or an attaboy, I turn to the quintet’s rippin’ trio of EPs. The combo of singer Tina Halladay’s voice — like Etta James compressed through a tin can — and guitarist Kyle Seely’s indomitable uncle-rock shredding resets any bad attitude and psychs me the fuck up.
Before dates and after breakups, I listen to Sheer Mag. For basketball warm-ups and watching hockey fights, I listen to Sheer Mag. I think I could bear a major and un-anesthetized surgery with only a tall beer and “What You Want” booming out of a fine rig of speakers.
Short for “Sheer Magnitude,” the quintet emerged from the Irish and Italian American enclave of South Philly — the neighborhood pictured in It’s Always Sunny in Philadelphia. Like the best moments of the absurd townie comedy, Sheer Mag’s combo of ’70s radio rock, punk grit and anti-capitalist attitude makes you want to pump fists and get drunk on a roof with your oldest friends. $8, 8pm Sat, Paper Tiger, 2410 N. St. Mary’s St., papertigersa.com.
— Matt Stieb

Click here for our full story on Sheer Mag

Pioneers of Spanglish Latin-spiced rock ‘n’ roll, the one and only Texas Tornados are some of our favorite vatos. On a San Francisco stage in ‘89, four friends and supreme musicians formed a musical crossfire that would blossom into the number one Tex-Mex super-group. Made up of Hispanic country-fried soul star Freddy Fender, accordion wielding madman Flaco Jiménez, and the already-legendary Augie Meyers and Doug Sahm of garage country conjunto Sir Douglas Quintet, Texas Tornados had success and fame woven into their destiny. Recently, the group reunited with the two surviving original members, Meyers and Jiménez, along with the addition of Sahm’s son Shawn for 2010’s Está Bueno, a collection that honored the group’s past, present and future with rereleased material and new compositions. Although members have come and gone — including the death of Fender from lung cancer and Sahm, who had a fatal heart attack — it was the four men in the quintet who, with their individual talents, made tejano and Texas history. With Wayne “The Train” Hancock, DJ Smoak, Mothership and more. $10, 11am Sat, River Road Ice House, 1791 Hueco Springs Loop Road, (830) 626-1335, giddyuptx.com. — Shannon Sweet