I Saw the Light: But I Didn't Hear Hank 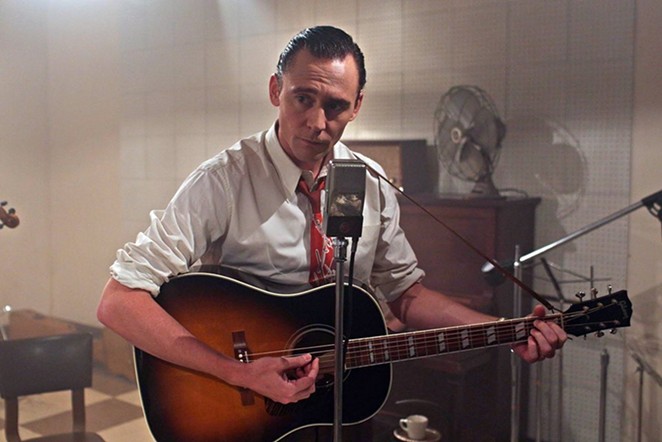 If Jimmie Rodgers is the “father of country music,” the place where the hillbilly wailin’ of white folks meets the blues progressions and field hollers of Southern blacks, then Hiram King Williams, famously known as Hank Williams, is the King of Country.

Rodgers put the fledgling genre on the map, incorporating numerous styles into his high and lonesome crooning, namely blues and jazz. Williams picked right up where Rodgers left off and in so doing took the infant genre into the mainstream.

Perhaps it’s the Southerner in me, or simply the country music adorer, but when it comes to a Hank Williams biopic, I’m prejudiced. Sure, Joaquin Pheonix did a decent job of portraying (an abbreviated glimpse of) the troubled life of The Man in Black, Johnny Cash. However, Robert Hilburn’s recent biography on Cash has since shown that there was a whole lot more to the man than a booming bass voice, drug abuse and a couple instances of infidelity. Essentially, punching a bunch of holes in the sugarcoated musical-drama Walk the Line.

In the instance of I Saw the Light, Tom Hiddleston, a Brit who underwent guitar and vocal lessons, lost a considerable amount of weight to match the gaunt frame of Williams and won the praise of Johnny Cash’s son-in-law and country singer-songwriter, Rodney Crowell, just didn’t do it for me.

These aren’t mere box office opportunities, folks. These are the epic stories of embittered, battled men. Men that not only lived in a time with far fewer modern conveniences (the mere existence of air-condition being something Williams would have experienced very rarely, if ever, in his short life), but men that tilled the soil of their souls for the words and melodies to perfectly articulate their worries, woes and joys. It’s not enough, to me, for an actor to do a “pretty good job.”

Maybe that means the genre is better left alone. There have been numerous attempts at a Williams biopic, the family routinely refusing to give consent for the rights to the singer’s image. But, do we really want to see a halfway-decent portrayal of our musical heroes so badly that we’ll accept any old refried attempt at a Disney-ification of these tortured, brilliant artists?

That being said, I will say that as far as looks go, Hiddleston is dead-on as Hank. It’s often uncanny how much he resembles the rail-thin charmer with distinct grin lines, a rarely-if-ever-removed cowboy hat and Williams’ giddy-up scuffle when onstage, bobbing from side to side, illustrating the backbeat that wouldn’t be fully realized until the rock ‘n’ roll chart takeover of the mid-50s.

What I could have accepted, rather than an attempt, no matter how admirable, to sound a lot like Hank, would be Hiddleston lip-syncing to Williams’ classic catalog. If I am going to suspend my disbelief in the numerous other dimensions of Williams’ character that just can’t be personified by anyone that isn’t him, I can certainly do so when it comes to the greatest quality that set the man apart from his counterparts and exalted him to his status as reigning voice of country music.

It’s his voice, folks! That’s what matters most. That’s the only reason we even know who Hiram King Williams was! I applaud Hiddleston’s determination, reportedly working numerous hours a day on Williams’ Alabama drawl and fanciful flights of yodel and croon. However, had Hiddleston been encouraged to devote the same amount of time to learning the bard’s mannerisms, phrasing and the architecture of his vocals (which Hiddleston must have surely done anyway) I wouldn’t mind the potentially awkward pantomime and could then focus more on the story being told.

This is where I would usually digress but my devotion to the subject (and maybe a little Southern stubbornness) will not have it! Did they think we were gonna be pissed that Hiddleston wasn’t singing himself? It’s Hank Williams for fuck’s sake! He’s the master. Choke down whatever pill is necessary to realize you’re not hurting anything but admitting that just about no one (other than Texas rockabilly troubadour Wayne “The Train” Hancock) can sound exactly like Hank. I was left feeling like Hollywood had gifted me a prize thoroughbred and was encouraging me to look it in the mouth, completely convinced of its pedigree, and then, when finally obliging them, the caps were fairly obvious and there were clear indications of where the braces had been.

Bottom line, it’s Hank Williams! Don’t Joaquin Pheonix me and get close. This needs to be a career-making performance.

As for the story being told: it’s just fine. It does a decent job at dropping some knowledge perhaps not memorized as holy writ by the casual Hank fan: Luke the Drifter, Williams’ battle with alcoholism and pills fueled by his severe back problems, his tempestuous relationship with first wife Audrey, an abortion she underwent when pregnant with Hank’s child and her hardheaded insistence on being a star herself, his passion for the Grand Ole Opry, friendship and partnership with publisher Fred Rose and the inclusion of Ray Price, Red Foley and other classic country contemporaries. All in all, a fine performance from a gifted cast; Hiddleston, Elizabeth Olsen as Audrey Mae Williams, Maddie Hasson as Hank’s second wife Billie Jean and Bradley Whitford as Rose.

My point of contention, if not articulated to an obnoxious degree already, is that when dealing with a legend, a man whose art is up there with Shakespeare (Williams is fondly referred to as the “Hillbilly Shakespeare”), Bach, Louis Armstrong, Duke Ellington and the ever-expanding Mount Rushmore of music masters, don’t snuff out the man’s light in an attempt to highlight the brilliance of another, especially in a different medium. Let Williams’ ability to bring grown folks to their knees, with his unique vocals and jarring turns of phrase, have the spotlight. Let the light shine and focus on what you can illuminate in film: the story and the ability of the thespians to portray it accurately, adequately and impressively. Let Hank sing!