All’s fair in love and soccer, and sometimes even mama’s got to step off the sidelines. In Kathleen Clark’s Secrets of a Soccer Mom, three reluctant mothers rage against their sons in a rapidly unraveling soccer game where confessions fly as fast as the ball. Weaving the pleasant predictability of a Lifetime movie with a laugh-out-loud script, the annual game encourages a bout of unexpected soul-searching as the women question motherhood, independence and whether they should let their boys win. The “sympathetic and compelling comedy” ultimately serves up a heaping helping of girl power as it kicks mommy-blog culture to the curb. Marisela Barrera directs the AtticRep production starring Anna De Luna, Georgette Lockwood and Margaret Tonra. $18-$28, 8pm Thu-Sat, 2:30pm Sun, Tobin Center for the Performing Arts, 100 Auditorium Circle, (210) 223-8624, atticrep.org. — Murphi Cook

Of all the places we’ve enjoyed poetry readings, this might be the first time we’ve heard of one going down at a brewery. But, why the hell not? Think about it: A poet is to a poem what a brewery is to a cold brew. So, consider Craft-brewed Poetry — which pairs fresh Busted Sandal beer and some of the finest poets SATX has to offer — your chance to go straight to the source(s). Hosted by slam poet and self-professed “taco expert” Eddie Vega (pictured), the reading showcases the spoken-word talents of Rooster Martinez, Sarah Maddux and Jason “Shaggy” Gossard, among others. Free, 7-9pm Thu, Busted Sandal Brewing Company, 7114 Oaklawn Drive, (210) 872-1486, bustedsandalbrewing.com. — James Courtney

Everybody knows the tale of the girl who went to the ball and lost her glass slipper when the clock struck midnight. Originally written for television in 1957, Rodgers and Hammerstein’s spin on Cinderella has rallied the likes of Julie Andrews and Brandy to star as the leading lady yearning for a better life. Onstage, the family-friendly musical treats the familiar bits (including the pumpkin carriage, the masked ball and the ugly stepsisters) to a bevy of unexpected transformations, all accompanied by a live orchestra. $35-$125, 7:30pm Thu, 8pm Fri, 2pm & 8pm Sat, 2pm & 7:30pm Sun, The Majestic Theatre, 224 E. Houston St., (210) 226-3333, majesticempire.com.
— MC

“I think that the mission, in terms of the festival itself, has been unchanged from the beginning, and that is to bring acts that otherwise wouldn’t normally come to San Antonio to San Antonio. And I think that this year continues in that vein.”
This statement from Blayne Tucker, one-half of the driving force and promoter extraordinaire behind Maverick Music Fest (the other being Faith Radle), seems banal enough. What he went on to say, however, took me by surprise.
“Frankly, I see [Maverick] going one of two directions. … Because we’ve sort of tapped-out the footprint we’re at as a festival, the trajectory that it’s on seems to be bustling to a point where we need to … expand … Alternatively, I think it should cease altogether. One or the other.”
I don’t know why I assumed Maverick Music Festival, now in its fourth year, would operate in perpetuity at La Villita, growing in size, stature and talent offered with every trip around the sun, eventually hosting Beyoncé and Jay-Z as they co-headline the main stage; Givenchy sombreros pulled low over their eyes, classic Spurs-colored confetti pouring down on the reigning King and Queen of Pop. With this year’s festival playing host to the Flaming Lips and Public Enemy, that doesn’t seem like a totally ridiculous idea … does it?
But that just doesn’t seem to be the case. Unless, of course, Tucker and co. can find a more suitable venue(s) for the annual two-day party promoting our city and its gradual ascension into “Realest Music Capital of the World.”
Well, if this year does end up being the last, at least it will go out with a dang ol’ bang of radical, psychedelic proportions. Click here for the complete lineup and schedule. $39-$169, 5pm Fri, noon Sat, La Villita, 418 Villita, (210) 207-8614, maverickmusicfestival.com. — Travis Buffkin

Click here for our full preview of the festival.

Loosely based on the career of groundbreaking disc jockey Dewey Phillips, Memphis throws audiences into the heat of racial tension, love and rock ‘n’ roll in 1950s-era Tennessee. With an original score by David Bryan and Joe DiPietro, the Tony Award-winning musical follows a white man with a passion for R&B and his dangerous affair with an up-and-coming black singer. Touted by critics as “an exuberant musical with classic values,” Memphis lights up the Woodlawn with a production directed by Rebecca Trinidad starring Brian Hodges, Marie Warren and Edward Burkley. $17-$26, 7:30pm Fri-Sat, 3pm Sun, Woodlawn Theatre, 1920 Fredericksburg Road, (210) 267-8388, woodlawntheatre.org. — MC

Rendered with everything from ground aluminum and rose petals to wax and tar, Jesus Toro Martinez’s mixed-media paintings might pull visual triggers before any personal or emotional ones. Yet, Martinez — who earned his BFA from the gone-but-not-forgotten San Antonio Art Institute — imbues his richly layered works with references to such universal themes as love, religion, conflict and cultural identity. Possibly nodding with its title to all that lies beneath his abstracted surfaces, Martinez’s “Symbols & Icons” opens in conjunction with Second Saturday in the South Flores/Lone Star Arts District. Free, 7-10pm Sat, Dock Space, 107 Lone Star Blvd., (210) 723-3048, facebook.com. — Bryan Rindfuss 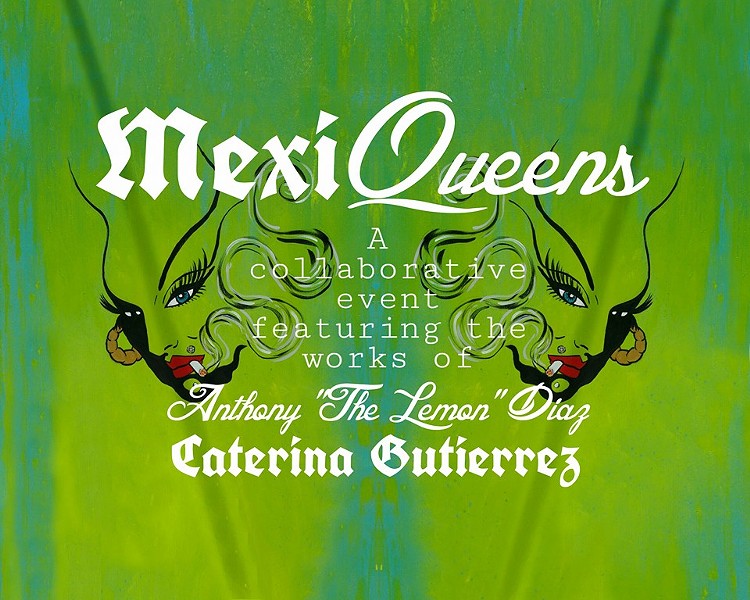 As managers of Karolina’s Antiques, brothers Anthony and Uriel Diaz push the family business beyond an eclectic retail environment to act as both an “alternative safe space” and a “go-to zone” for the LGBT community. Rising to the occasion, Karolina’s playfully titled “MexiQueens” marries drag-inspired artwork and fashion design in a collaborative showcase for local artists Anthony “The Lemon” Diaz and Caterina Gutierrez. Whether working on paper or using his own face as a canvas, Diaz celebrates fierce “glamazons” and other “fantastical characters that only further highlight the fluid nature of gender.” Self-described as a “chola trapped in a drag queen’s body,” Gutierrez employs fashion as a medium to comment on “the duality of the Nuevo Latino identity,” with her new collection “Que Más Quieres?” comprising 12 looks to be worn by models of all shapes and sizes. $10-$15 (includes one drink, VIP tickets include swag bags), 6-9pm Sat, Karolina’s Antiques, 1709 Blanco Road, (210) 731-9787, facebook.com. — BR

Mixed-media painter Cait Sherwood comes to Provenance Gallery all the way from Brookeville, Maryland. Considering she lives and works on her family’s farm there, it’s no surprise that her work — which melds water-soluble graphite, cut painted paper, gouache, acrylic paint and more — is full of nature. In her solo show “Scraps,” Sherwood presents works made over a span of six months in response to the landscape. Like all of Sherwood’s work, these pieces progress organically from an initial idea to their final form, combining elements and artifacts from throughout her personal creative world. Free, 7-10pm Sat, Provenance Gallery, 1906 S. Flores St., (210) 216-8362, cait-makes.com. — JC