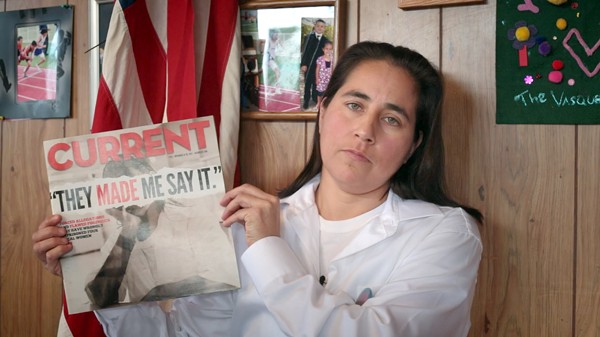 After five long years, Austin-based filmmaker Deborah S. Esquenazi has completed her first feature documentary. Southwest of Salem: The Story of the San Antonio Four will make its world premiere at the Tribeca Film Festival this week. The film tells the story of four Latina lesbians – Elizabeth Ramirez, Kristie Mayhugh, Cassandra Rivera and Anna Vasquez – who were sent to prison for more than a decade after being accused and then convicted of sexually assaulting two of Ramirez’s nieces in 1994. After one of the alleged victims recanted her testimony and new evidence was presented that proved their innocence, all four women were released from prison, although they have yet to be fully exonerated by the court system. Currently, Vasquez is out on parole and Ramirez, Mayhugh and Rivera are free on bond.

In late February, Bexar County District Attorney Nicholas “Nico” LaHood told the San Antonio Express-News he didn’t “believe pursuing these cases would be in the interest of justice.”

During an interview with the Current earlier this week, Esquenazi talked about what she hopes her finished film can ultimately do for the San Antonio Four and shared her theory on why the judicial system is having so much trouble labeling them “innocent.” She also talked about what it has been like as a filmmaker watching her project evolve over the last five years and the emotion she felt when she witnessed the women finally released from prison.

You held a work-in-progress screening of this film at Our Lady of the Lake University in 2012. How does it feel getting ready to premiere a finished film at the Tribeca Film Festival?

It feels crazy! I can’t even describe it. I’m very excited and also incredibly nervous. Getting here has been incredibly challenging, but amazingly enriching. In the process of making a film, you find your voice and you find yourself. I’m thrilled. Tribeca is a pretty magical place for us. We’re going national and then we’ll be international. Suddenly, the women will really get a platform to talk about their history and their case.

All four women are out of prison now and they’re waiting to see if they’re going to be tried again or if their cases will be dropped. Do you hope this film can ultimately help the women finally be identified as completely innocent?

Senior District Judge Pat Priest ruled that the women deserve a new trial, but that “proof of actual innocence falls short of the mark.” With all the evidence presented, why do you think he could not exonerate them completely?

That’s probably a better question for [Director of the Innocence Project of Texas] Mike Ware. I mean, I have my theories.

I’m not a lawyer, so it’s hard for me to understand how you can present all of this evidence and still have questions about their innocence. The film really lays it all out. We never question their innocence. We always came from the perspective that these women are innocent, so let’s get them out of prison or let’s get them exonerated. I think, ultimately, when we get to the criminal court of appeals, I feel confident we can get those nine judges to see that. I think [Judge Pat Priest], who was the judge that sat on their case 20 years before, would’ve had to admit that he was wrong. As Mike Ware says in the film, it would’ve taken a pretty remarkable person to do that. That’s all I can say.

As a filmmaker, how much responsibility did you feel taking on this project, especially with the access you were given?

A huge responsibility! The issues of agency and representation are really important ones when you sit behind the camera. I don’t know if you’ve ever read anything by [late American writer] Susan Sontag, but she talked a lot about photography in the form of sublimated violence and how the camera has a certain kind of power to it. It doesn’t change the nature of things.

So, when you’re sitting on my end of it – when you’re in a position of privilege – and telling somebody else’s story, you have to approach it with great care. There is a level of responsibility and it is scary. I did make it from a place of being very obsessed with their case and also believing that their case meant something bigger about issues that go beyond San Antonio and Texas in the '90s.

What was it like for you to watch your film evolve over the years and turn into something you didn’t know it would become when you first started?

There were two narratives happening in the film. There was this legal story and then there was the social and cultural story. I feel like I was always kind of a step ahead of understanding the way the case was evolving because I was also filming the Innocence Project. I had anxieties about the end of the film. What would be the moment when I knew I was done? When I let go of that fear, it just happened on its own. I knew we reached our end when the women were released and I was able to spend several months with them until we got to the hearings. Right after the hearings, I knew that was the end for me and the film, but not the fight. I feel the film is like I’m handing over the torch to the public now. 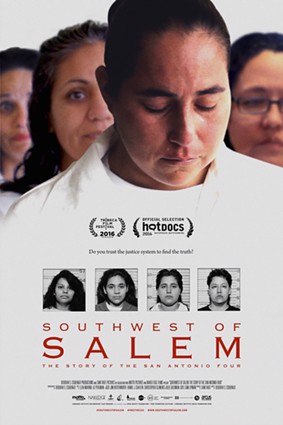 What did you learn about yourself as a filmmaker and storyteller during this entire process? How did you change over these last few years?

I feel like I really found that the deeper the themes – the more complicated the issues are on race and gender and economics and sexuality – the more interested I am in tackling it. I do believe that’s where there is a rich kind of story complexity. If you are able to capture all the little nuances and all the textures within those things, then there is a real opportunity to be incredibly creative and find the power of the story. I feel like for me to keep going where I want to go, I almost want to get father into that wormhole. I’d love to push that form a little more.

In fact, we’re going to be making a much more stylized short film based on just Liz’s trial. Her trial was heavily sexualized. The issue of gender and sex and all those things were really disturbing, but very interesting. We didn’t put them into [Southwest of Salem] because this film was more of a true-crime investigative film. It covers a lot of ground. Now that I’ve laid the framework, I want to go back and revisit those moments Liz endured on the stand in what I think is some of the most pernicious cross examination from the prosecution. I feel like I want it to go farther and really stretch myself as a creator.

Speaking of going farther, did you ever think this film could’ve been done as a documentary series like Making a Murderer? I mean, there is a lot you’re not able to get into because of time limitations. Would you have wanted to create something as sprawling as a 10-part series?

We were indie all the way here. This is a story about several moments in time – about four women and their experiences. If I had been given a platform to tell a 10-part series on this case, yeah, I’m sure it would’ve been gripping and we would’ve gone much deeper in certain moments. I mean, we could’ve gone much deeper into the recant and the women’s trials, but this is a platform that does have its limitations.

Describe what it was like to be there in person and watch the women finally get released from prison.

I was filming it. I was behind the camera as it happened. It was one of the greatest moments of my career. The film helped release those women. Everything we dreamed of happening happened at that moment. It was incredible. It was a very emotional night. I woke up the next morning and sort of felt like I was part of a dream.

Southwest of Salem: The Story of the San Antonio Four premieres at the Tribeca Film Festival on Friday, April 15 at 5:30 p.m. at Regal Cinemas Battery Park. Encore screenings take place Sunday, April 17 at 7:30 p.m. at the same theater and on Monday, April 18 at 3:30 p.m. and Wednesday, April 20 at 8:30 p.m. at Bow Tie Cinemas Chelsea. For more information visit tribecafilm.com.