Man with the Horn: Actor Don Cheadle on Channeling Jazz Great Miles Davis in Miles Ahead 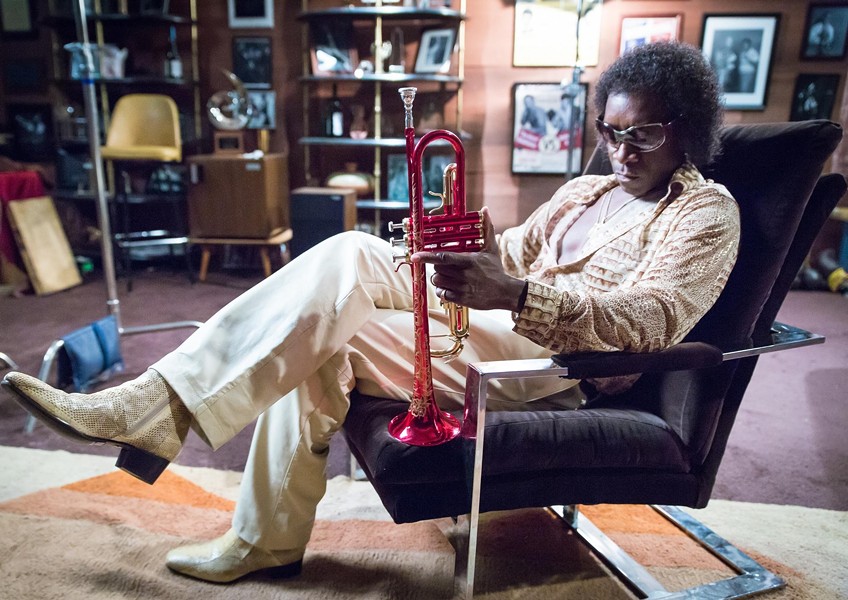 After legendary jazz trumpeter Miles Davis was inducted into the Rock and Roll Hall of Fame in 2006, Davis’ nephew Vince Wilburn, Jr. announced that a biopic about his late uncle was being produced and that Oscar-nominated actor Don Cheadle (Hotel Rwanda) was going to portray him. It was all news to Cheadle.

“I didn’t even know there was going to be a film about his life,” Cheadle, 51, told the Current during a sit-down interview at the South by Southwest Film Festival last month to talk about his new biopic Miles Ahead. “That’s when the gauntlet was thrown down.”

A decade later, Cheadle, best known today for his role in the Showtime series House of Lies and as War Machine in the Marvel comic-book franchise, not only stars as Davis, he also directed, produced and co-wrote the film, and even learned how to play all Davis’ trumpet solos, too. In Miles Ahead, the narrative springs back and forth between Davis’ life during his burgeoning career in the 1940s to the late 1970s when he becomes a drug addict and social recluse.

Miles Ahead opens in San Antonio exclusively at the Santikos Bijou Theater April 22.

Was getting you involved in this film just something Miles’ nephew hoped would happen?

It felt more like a proclamation. (Laughs) I mean, I admired [Miles’] music for many years. I started listening to it when I was 10 or 11 years old. But the movie found me. It’s not something I was trying to make happen. The family got in touch with me and we started talking about different approaches to the film and what stories we would tell, [but] I didn’t really spark to anything they pitched.

What is it about Miles’ music that makes it so timeless?

I think we hear his music now in the music we listen to today. There’s really no Kendrick Lamar or To Pimp a Butterfly without Miles Davis. His music spans generations and genres. Even today, I hear new things all the time when I listen to it. His music is a reflection of the time he is in, but it’s also a reflection of his ever-changing self. Miles used himself as the palette. There was always a different look and a different car and a different style. There was always a new way Miles approached his life with everything he did. 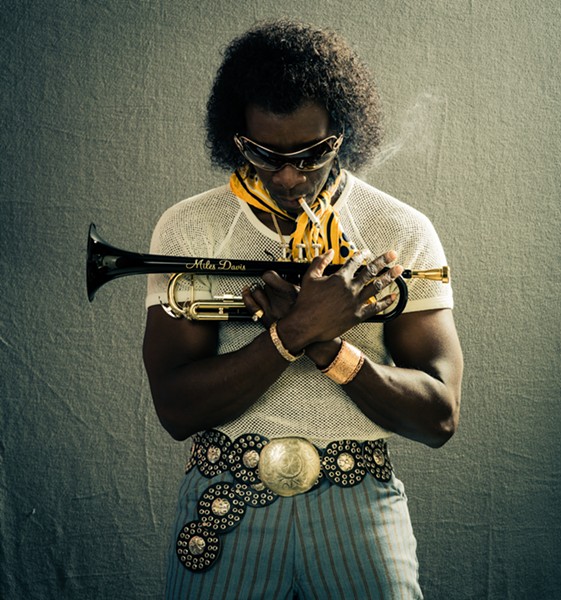 Many times in Hollywood, we see minority actors having to create their own work for it to become a reality. If you didn’t make a Miles Davis film yourself, do you think it would’ve ever happened?

I know they had been trying to make the movie for many years before I became involved. In general, making any kind of movie is daunting and very difficult. So, clearly, a movie that is seen as niche in any way becomes more difficult to make. If the subject matter is something that seems to appeal to a smaller audience like “jazz” or “period film” or “black film” or a “black jazz period film,” everyone looks at those metrics and goes, “What’s the chance I’m going to get a return on my investment?” It is challenging. I don’t know if the movie would’ve ever been made without me. Perhaps. Stars rise and fall at different times.

If Michael B. Jordan becomes the next Denzel [Washington] and said he wanted to do a Miles Davis movie, it may have been easier to get it made than for me to get it made. It depends on how you’re trying to cobble it together. I don’t think there is any definitive answer about what makes someone say yes or no. In Hollywood, people who hold the purse strings are more often than not looking for excuses to say no and not reasons to say yes.

This being your directorial debut, did you borrow anything from any of the great directors you’ve worked with during your career like Paul Thomas Anderson and Steven Soderbergh?

Just money. (Laughs) Yeah, I learned a lot from them. If you stay aware and awake and open, especially as an actor, you’re in a pretty privileged position to be a fly on the wall [on the movie set]. [Actors] are the focus of attention, so we get to see how every department is working to make this thing happen around you.

Some of my favorite stuff to do is stay on the set and hear the conversations the DP is having with the gaffers and hear what the director is talking about with the production designer. You get to learn a lot and start seeing how to be a problem solver. A lot of times, that is what you are as a director. You have to be malleable. You have to be able to call an audible.

What I’ve learned from the best directors is that they do their initial job at hiring the right people. And then they let them do what they’re supposed to do. They entrust the people they’ve brought on for their specific talent and allow them to do it. They don’t micromanage every decision.

What did you learn about the trumpet itself?

How do you feel about the backlash actress Zoe Saldana has received for her decision to take on the role of Nina Simone in an upcoming biopic?

I don’t know that she needs to be taking the backlash. [Journalist] Ta-Nehisi Coates just wrote a really interesting essay about it that everyone should read. He gets granular about the subject. It’s a complex issue like this #OscarsSoWhite thing.

People want to focus on that one aspect of it and not bring in everything that is underpinning all of these decisions. That’s really what has to be focused on –this endemic and systemic and institutionalized point of view about standards of beauty and depictions of our stories in film and commerce versus responsibility to historical accuracy. There are just much bigger issues than an actor taking a good role and attempting to bring their artistic truth to it. I think she is being singled out and vilified for saying yes to taking a role as opposed to the powers behind it and the powers surrounding all those issues.

Next year will mark the 20th anniversary of Boogie Nights. Where do you think Buck Swope would be today?